It’s a film that establishes an emotional connect, appeals to your heart rather than your head. In many ways, it’s Munnabhai 3. 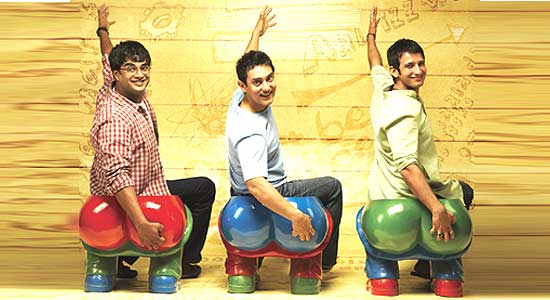 The film came when Outlook had gone on its year-end break. It has been loved and appreciated by many and criticised by quite a few. It has also been in the thick of controversy for being based on Chetan Bhagat’s Five Point Someone and not acknowledging it properly. So what do we think of the film on which the last word keeps getting written every day?

Well, this is an old-fashioned, mainstream film that has something for everyone, its appeal cutting across all age groups—from cheeky teenagers to sombre grandparents. It’s a film that establishes an emotional connect, appeals to your heart rather than your head. In many ways, it’s Munnabhai 3. The trinity of Aamir, Madhavan and Sharman as three misfit, engineering students are an extension of Munna and Circuit, telling us the essential truths of life with light-hearted banter. There is a moral tone but you enjoy the lessons Raju Hirani teaches you. And for someone who has been forced to go through the mind-numbing rigour mill of IIT-JEE, REC, PMT etc, it strikes a huge chord.

Hirani’s childlike sense of fun does go risque and politically incorrect in the vignettes of college life. But then, isn’t irreverence, impertinence and colourful lingo the trademark of being young? The standout scene is the one in which Hirani plays out the downbeat penury of a family in ’50s sepia tones and a very upbeat mode. There are two other delightful throwaway moments: a man taking pictures of a group of identical burqa-clad women in Shimla and the DDLJ reference, when the father allows his son to pursue wildlife photography saying: “Jaa betey, apni zindagi jee le”.

Aamir may have hogged the film’s marketing but doesn’t quite dominate the film. He is the pivot, yet the dramatic, playing-to-the-gallery moments go to the rest of the cast, especially the opera-obsessed, lisping Boman and the rag-tag Sharman. On the flip side, the script goes outlandish (webcam and vacuum cleaner-aided delivery scenes) in the second half and the tragic suicide scenes are played out too abruptly. But we had fun.

1. Avatar
2. Sherlock Holmes
3. Alvin and the Chipmunks
4. It’s Complicated
5. The Blind Side