The kind of romcom which I would have liked in my teens but have no patience for now. It is way too dull and drab for enjoyment of any kind 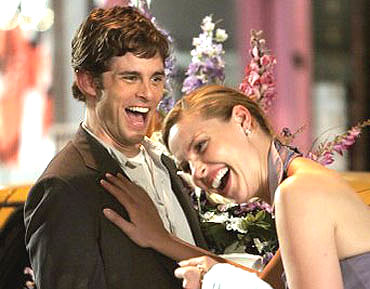 Perhaps it’s to do with getting older and wiser. 27 Dresses is the kind of romcom which I would have liked in my teens but have no patience for now. Not that I’m overly cynical, not that I have anything against this crazy thing called romance but I would rather have it a little unusual as in Eternal Sunshine of the Spotless Mind or deeply philosophical like in A Short Film About Love; heartachingly sad as in Brief Encounter or delightfully amusing like in It Happened One Night. Or just give me the usual Dilwale Dulhania Le Jaayenge or the recent fad Jab We Met—fluff that’s fun.

27 Dresses is way too dull and drab for enjoyment of any kind. It’s about a perennial bridesmaid Jane (Heigl, all-American sweetheart of the Julia Roberts, Jennifer Aniston variety) ardently waiting for her turn at the altar. The 27 dresses refers to the ones she wears at her friends’ weddings and later preserves as happy memories. She also files away the mushy Commitment column in the papers. Now she happens to be secretly and unrequitedly in love with her boss George (a stone-faced Burns) who, much to her distress, falls for her badly behaved kid sister Tess (Akerman, alarmingly insufferable) instead. Meanwhile, the writer of the Commitments column, Kevin (a callow Marsden), who has been commissioned to do a feature on Jane, falls for her. Some misunderstandings later, he manages to convince her that it’s her turn now to be "taken care of" by, who else, but him.

The film is yawningly predictable right down to why the heroine is called Jane (as in Plain). You know that the heroine will eventually find her heart-throb and it has to be the one man she cares two hoots for. Fine. But, at least this same old story could have been told engagingly. The film has no style —neither punch nor panache, neither attitude nor flair. Not a single character comes alive, not a single situation connects with the audience. Then there are cheesy lines like "marriage isn’t easy, cynicism is" and how marriage, like Santa, is a dream that one has to believe in. The vibe between the lovers is a critical part of any romcom. Here they seem like hand-holding siblings. Better watch it on TV; it should be coming there soon.