A grim-looking Laloo, a tough-talking EC, a Muslim-Yadav vote trying hard to consolidate. It's all happening after two phases of the ballot. Updates 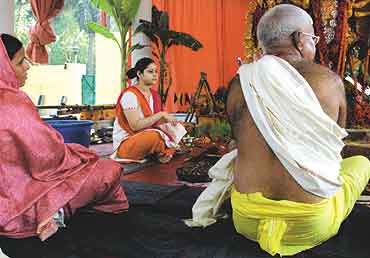 outlookindia.com
-0001-11-30T00:00:00+0553
For the last 15 years, every election in Bihar has been about the larger-than-life personality of Laloo Prasad Yadav. This time around, though, he's the man at the centre desperately trying to reinvent himself. The jokes and humour have gone, the colourful Bhojpuri speeches are more to the point. Laloo's spiel is brief—a victory for the JD(U)-BJP will mark the return of feudal and communal forces. Don't be fooled by them. Be on your guard. If nothing else, he's been purposeful to a fault, addressing a huge number of rallies even as wife Rabri Devi went door-to-door in her constituency, Raghopur.

Union rural development minister Raghuvansh Prasad Singh agrees that "he's become serious". Laloo himself says he no more wants to be a provider for the media's joke-a-day. He wants to focus on the campaign, not waste time in TV studios "where they want me to be part of a cock-fight". As always, there are various interpretations to this new grim Laloo. His opponents would like to believe it's a sign of desperation. Says BJP's Sushil Modi: "He's a transformed man. He's so worried he can no longer even crack jokes." Arun Jaitley has a similar spin: "I think it's a sign of anxiety, he's no longer setting the agenda in this election. Development, and not Laloo, is the main focus this time."

If the exit polls for the first two phases are to be believed, then there is good reason for his ill humour. But it would be a huge blunder to underestimate Laloo's survival skills. One of the few talented mass leaders on the Indian public stage, he's always maintained: "I have a thermometer. I can take the temperature of the public." But what can be done if the public itself is somewhat tepid and indifferent? The Election Commission's strict measures have also taken the colour out of the whole process. A sense of fatigue, of a people being asked to vote twice in a year, is visible everywhere. No surprises then that it's been one of the lowest voter turnouts in the state's history.

Yet, there are also quiet trends indicating that all may not be lost for Laloo. After 15 years in power, there had been some scattering of his Muslim-Yadav combine in the assembly polls held in February. Most observers in Patna believe the Yadavs are again gathering the flock to stand firmly behind their man. On the second day of polling in Jadua village of Hajipur district, a group of Yadavs explained how they viewed the new, transformed Laloo. Some of them had backed the BJP candidate in the last elections (also a Yadav). But now they've realised that if Laloo is defeated again, their clout would be reduced. Babban Yadav elaborated further: "We are happy that Laloo is serious this time. We believe this time he's determined to bring development to the state."

The Muslims are also a matter of intense speculation. Many of them did not turn out to vote in the two phases of polling so far. But this is expected to change in the last two rounds, where Muslim votes remain crucial. Maulana Anees-ur-Rahman Qasimi, general secretary of the Imarat-e-Sharia, at the influential Phulwari Sharif, reveals that Laloo, the ljp's Ram Vilas Paswan and JD(U)'s Nitish Kumar have all come calling, asking for his support. "Everyone wants the Muslim vote, but it is not so simple. In some seats, if the candidate is good, even the JD(U) might get support. But many Muslims believe that Nitish Kumar is tainted by his association with the BJP." The maulana then went on to reveal that he told Paswan he wasn't impressed by his insistence on a Muslim CM. "There were so many Muslim ministers in the RJD government...what difference would a CM make?"

And clearly, Laloo is still the favoured one. "He'll be able to stop Muslims from drifting away this time. They have been reluctant to venture out in the first two rounds because of the Ramzan fast. But there will be greater enthusiasm later," he says. So why do the Muslims remain loyal to Laloo when there has been no improvement in their economic situation? "He's kept our morale high," says the maulana. 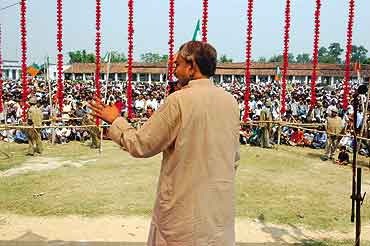 That, in a nutshell, remains the essence of a Bihar poll. In spite of the dismal economic condition of the state, Laloo remains relevant because some voters still credit him with giving them intangibles like self-respect and dignity. But after 15 years, an increasing number have also become cynical about his brand of politics. Perhaps why Nitish Kumar is getting an unprecedented response this time. And if he does indeed post a victory, it's certain that events in Patna will have reverberations in Delhi. Meanwhile, Paswan still remains the joker in the pack, stubbornly refusing to go with either side. "They are worried about forming a sarkar. I am worried about Bihar," he told Outlook. His prediction: a hung house with the RJD coming in third. While many may disagree about Laloo's performance, all are unanimous about another hung assembly.

Meanwhile, the nature of this poll may determine more than the fortunes of the major players. In every sense, this has been an unusual Bihar election so far: the guns and goons were conspicuous by their absence. Posters and banners were banned in a poll shorn of all the usual colour and drama. Instead, there were flag marches and shoot-at-sight orders. In what must surely be an exaggeration, advisor to the EC, K.J. Rao, described Bihar as more dangerous than Kashmir.

On Day 2 of polling, the Outlook team ran into a group of CRPF men in Jadua village on the edge of the famous Ganga bridge linking Patna to Hajipur. They had landed straight from Kashmir. Did they see the danger? "This is a vacation. All the goondas have run away. They know we are the biggest goondas," joked a soldier. The election bandobast is staggering: 567 companies of CRPF in addition to 40 companies of Bihar police, 30,000 men from the district armed police, 9,000 Home Guards.

At one level, the exercise seems excessive. Bihar looks like a war zone. In a region with so little prosperity, politics is still the most fiercely contested turf. Only one thing's a certainty, the battle for tenancy of the chief minister's residence at 1, Anne Marg will continue to be intense.