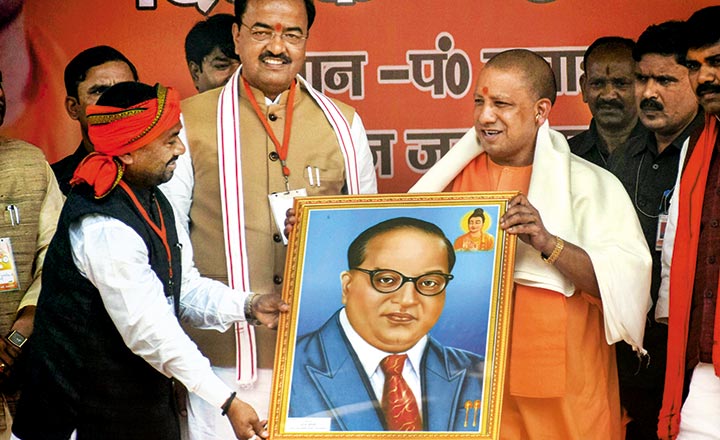 Frame Of Need
CM Yogi holds an Ambedkar portrait at an election rally
Photograph by PTI
Bhavna Vij-Aurora April 12, 2018 00:00 IST 2019: A Dalit Poll In UP

Soon after the name of Yogi Adityanath had been ann­ounced as the chief minister of Uttar Pradesh 13 months ago, supporters of Keshav Prasad Maurya took to the streets in Lucknow, claiming he was a better choice to head the state. The protests were quietly quelled, but the fault lines that ran through the BJP’s edifice in UP remained. Maurya, an OBC leader, had led the party’s state unit in the run-up to the Assembly polls. It was BJP president Amit Shah who had drawn up the ambitious scheme of a rainbow coalition in the state, but one of its chief architects on the ground was Maurya, who consolidated the party’s support base among non-­Yadav OBCs and non-Jatav Dalits—communities that had voted BJP in large numbers in the 2014 Lok Sabha election as well, and among whom Maurya enjoys considerable support.

For his efforts, the OBC leader was given the post not of CM, but his deputy, while the scale of the BJP’s victory—winning 312 of 403 seats in the state on its own—perhaps spurred the party to appoint Hindutva strongman Yogi at the helm. The Thakur leader was ent­rusted with the task of managing the diverse mandate in a caste-ridden state that has 40 per cent OBC population, 21 per cent ‘general category’ castes such as Brahmins, Baniyas and Rajputs, 20 per cent Dalits and 19 per cent Muslims. While the elite castes got a disproportionately large 44 per cent representation in the state assembly, the BJP and its allies managed to win 75 out of the total 85 reserved seats.

“The SP-BSP combine and Dalit assertion have changed the narrative for 2019. Dalits will decide the country’s future,” says Badri Narayan.

In 2014 Lok Sabha election too, 40 Dalits were elected from reserved seats on BJP tickets across the country and six more from its NDA allies. Many of the non-core party voters had reposed faith in the BJP mainly due to the appeal of Prime Minister Narendra Modi’s avowed commitment to inclusion and development. While the PM still rem­ains the party’s mascot and trump card, voices of disgruntlement with the UP chief minister have become louder.

In just over a year since the resounding UP assembly triumph, the well-crafted and powerful social coalition helmed by the BJP is falling apart, rev­ealing its inherent fragility. The successful coming together of traditional rivals Samajwadi Party (SP) and Bahujan Samaj Party (BSP) to trounce the BJP in bypolls in the UP CM’s bastion Gorakhpur and Phulpur has cha­nged the political narrative in the state. The results were a warning to the BJP that many of its Dalits voters could go back to the BSP, while the accusation of Yogi’s “Thakurvaad” has come to stick, and Brahmins could no longer be taken for granted as they may protest by not coming out to vote.

The unexpected protests and Dalit anger could be a result of heightened expectations and unfulfilled promises. Of the five Dalit MPs of the BJP who publicly questioned the government for ignoring the community and not doing enough for its welfare, four are from UP. Though the trigger is the Supreme Court order “dil­uting” the SC/ST (Prevention of Atr­ocities) Act, the anger seems to have been simmering for quite a while.

Until a few months ago, few Dalits would have shown Sanjay Singh’s doggedness as he fought for his right to take his wedding procession through Thakur-dominated areas of UP’s Kasganj town. The 27-year-old Jatav knocked on the doors of the Allahabad High Court, but his petition was dismissed and the local administration and police were asked to handle the issue. The to-be groom was persistent, offering the local administration two options for the procession’s route. Backed by his community, he told the officials that if this discrimination isn’t put to an end, they would ensure no Thakur wedding procession passes through their locality. Eventually, the police managed to broker a compromise. 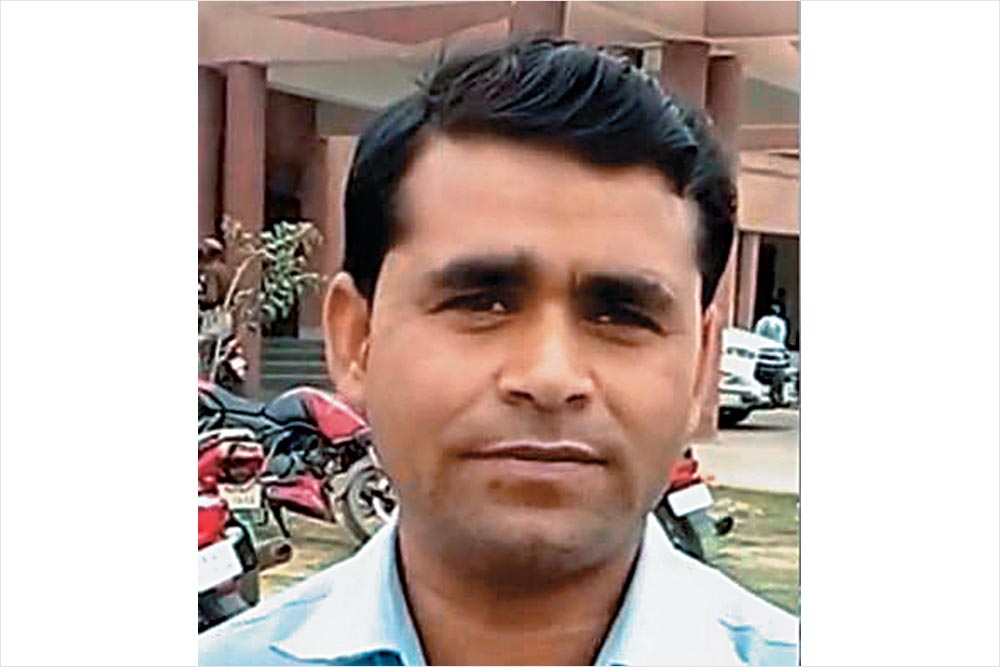 Sanjay Singh, a Jatav, fought to take his wedding ­procession through Thakur-dominated areas

“The underlying message sent out by such acts and the violent protests—that Dalits are ready to fight for their rights—is ominous,” says a senior state BJP leader. “It is an assertion of their identity and that they are not weak.” Ironically, the leader iterates, the more the government talks about inclusion and giving Dalits their dues out of political compulsion, the more the Dalits become aware of caste-based injustice. “There is a growing feeling that little besides lip service is coming from the government for Dalits, and it does not augur well for the BJP, neither in the state nor at the Centre,” he warns.

That the party has not taken any ­act­ion against the MPs who made their grievances public—considered sacrilege in BJP circles—says a lot about the ­predicament of the party, which can’t afford to be seen as acting against Dalit MPs at this juncture. However, a party general secretary tells Outlook, “They have crossed the line of party discipline and appropriate action will be taken against them at an opportune time.” Pointing out that some of the protesting MPs like Yashwant Singh are new­comers in the party and do not know its culture, he says about the others: “Perhaps they had to escalate it to the level of the PM as they did not get a proper hearing in the state.”

Walking the tightrope, the party top brass is trying to tackle the issue as tactfully as possible. Sources say PM Modi has expressed his concern over the state of affairs in UP to Yogi Adityanath, asking him to rein in those who may be feeling emboldened with him at the helm. Yogi also met Amit Shah on April 7 in Delhi to explain the situation to him. Shah is believed to have told him that he will do a first-hand assessment during his visit to UP on April 11. Earlier, senior RSS func­tion­aries Krishna Gopal and Dattatreya Hosabale had gone on a three-day visit to the state, where they met senior BJP leaders and Sangh activists.

Badri Narayan, a social historian and cultural anthropologist affiliated with the G.B. Pant Social Science Institute in Allahabad, believes Dalits have definitely become wary of the BJP. “If the Dalit votes shifts, which appears likely, it would be to Mayawati’s advantage—and also benefit the SP if the two parties are together,” he says. “In bipolar states, it’s the Congress or any other party in Opposition that may benefit. The BJP, however, has worked hard for a base among Dalits and won’t be letting go of their votes so easily.”

Narayan feels the BJP may find it tough to find the right balance between its core constituency of elite caste ­voters and the Dalits. Even though it is quite adept at such balancing acts, it carries the risk of ending up on the wrong side of both. “While it may be a challenge for the BJP to handle the issue politically, it will fall back on the larger Sangh parivar to assimilate Dalits at a social level,” says Narayan. “One thing is certain. It is the Dalits who will decide the future of the country in the next general election. The SP-BSP combine and Dalit assertion have changed the nar­rative for 2019.”