For L.K. Advani, it's now or never. Will his party deliver the prime ministership to him? 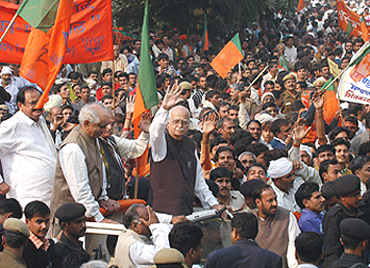 But can Advani make it as prime minister? The NDA is currently the underdog in the 2009 race. The prevailing wisdom is that the ruling UPA will somehow crawl back into office, perhaps with new post-poll allies. Others see the Third Front as very much in the realm of possibility although increasingly the numbers suggest it could be more "a state of mind" than any real formation. There aren’t many who give the BJP a chance, especially after the rupture with the Biju Janata Dal in Orissa. 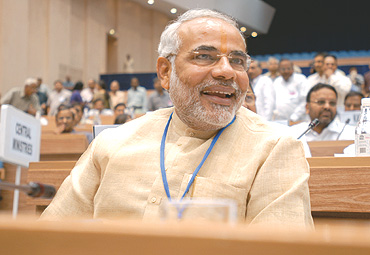 Narendra Modi
Gujarat chief minister
Is seen as the heir apparent in the BJP. The Gujarat CM is certainly the most effective mass campaigner in the party today. He is targeting the Gandhi family and has so far drawn huge crowds in Maharashtra. His USP: a combination of charisma with a proven record in governance and popularity among industry. In Gujarat, he is expected to improve on the 14 of the 26 seats won in 2004.

Yet the pundits also admit that predicting this poll is something of a mug’s game. With no wave, no all-India issue, it is going to be the sum total of a fractured mandate. And the BJP can certainly expect to be either the single-largest or the second-largest party in the 15th Lok Sabha after the votes are counted on May 16. That calculation in itself keeps the party in the race, given the fact that even the other formations do not appear to be poised to perform spectacularly.