There is an alarming political unanimity on pro-rich growth economics 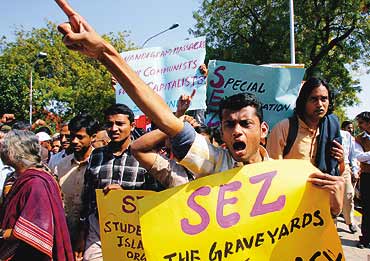 The wide range of political choices available in our multi-party democracy seems increasingly illusory. A marked convergence is occurring among political parties. It isn't just the compromise of coalition politics at the Centre—political parties of very different labels are following with equal vengeance the same economic course: growth through industrialisation. Yet, it leaves open the central question. Is the high rate of growth via a certain kind of industrialisation synonymous with development?

The type of industrialisation currently on in India has three traits. Corporations lead it; they're mostly private and the government's role at the central and state level is of a promoter of private corporations, not of a regulator. All political parties seem to agree that the cost of industrialisation has to be borne by the poor. The corporations need make no sacrifice; they need encouragement. The estimated subsidy to the Tatas in Singur is Rs 850 crore for investing Rs 1,000 crore.

As traditional political differences melted into a homogeneous neo-liberal mass, first Singur, then Nandigram drove home the point that many of the Left politicians are no different from the 'dream team' of economic policymakers at the Centre, who favour the World Bank-IMF and the ADB. The political double-talk all around is amazing. The cultural nationalists of the Hindutva sort uphold violently their culture when it comes to Ram mandir, but surrender willingly to foreign MNCs. The Congress has a remarkably short memory about the Sikh massacre of 1984. The Left parties breathe fire about the Gujarat carnage of 2002, while the BJP covers it up with false propaganda and manipulation of state machinery. Then Nandigram happens in 2007, and Advani compares it to Jallianwalabagh, conveniently forgetting Gujarat, while CPI(M) leaders and its supportive intellectuals call it an unfortunate incident that happened accidentally. The killing of 13 tribals in Kalinganagar in 2006 by the police bears an uncanny parallel. The tribals were refusing to hand over their land to the same Tatas in Kalinganagar, just as in Singur the peasants are resisting and in Nandigram they have resisted. Should we be erecting a defence of empty words to say how different Naveen Patnaik is from Buddhadeb Bhattacharya because of different political labels? Field reports from Kalinganagar and Nandigram reveal that these were premeditated actions by state authorities to test the waters to see how far they can go in the service of large corporations.

With high growth through industrialisation working ruthlessly against the poor, a spectre of despair and popular anger stalks the air. Farmers commit suicide in Maharashtra, Andhra Pradesh and Punjab because governments there decide to usher in commercial agriculture under WTO with expensive inputs supplied by MNCs, but provide no subsidy, no appropriate price for their produce. In Chhattisgarh, in the name of fighting extremism, thousands of tribals are being evacuated forcibly from their villages under Salwa Judum to be huddled in Vietnam-style concentration camps, while corporations greedily eye their mineral resource-rich ancestral land. The communities richest in natural resources in this country are kept poorest by denying what belongs to them.

Land being a state subject, policy towards its acquisition is largely the state government's prerogative. And yet, irrespective of political colour, land is being acquired forcibly by various state governments in a competitive race to the bottom to win the favour of corporations. This has the full legal and moral support of the central government. Incidentally, the state government has full constitutional powers not to oblige.

Using the same old act since the British days, amended in 1984 under the 'eminent domain' clause, the state overrides private property rights in land in 'public interest' to acquire it for mining, for industries, for large estates and IT parks, and finally for SEZs. Land, the primary source of livelihood in an agrarian economy, includes as per the act 'everything' attached to land: water and minerals. So forcible acquisition becomes the most obvious case of forcible transfer of resources from common people for whom land is not property but livelihood to private corporations. It is justified as a process of 'creative destruction' with gainers and losers. However, this is a misleading half-truth. If such creative destruction were just a part of the normal process of capitalistic development, it would have been unnecessary for the state to intervene in the guise of 'public interest' on behalf of the private corporations. It involves a transaction between two private parties, namely the corporation and the land-owning peasants, and the state's function should be to ensure this transaction is voluntary, and on a level playing field because one party, namely the peasant, is economically far weaker. This would mean that the corporations can acquire land at a price at which the peasants are willing to part voluntarily with their land, either individually or via collective decision, the latter being especially relevant in the case of tribal land. Instead the state uses force and violence against those who live by this land, typically under a cloak of secrecy despite RTA.

Although land acquisition is the most visible symbol of transfer of resources to the corporations, the problem runs deeper. The bias against the poor in policymaking is both direct and indirect. The direct bias is visible in plan allocation. Less than 5 per cent of planned investment is allocated to agriculture, which engages over 60 per cent of the labour force. The indirect bias operates through a pattern of state-promoted consumption and production. Manhattan-like world-class cities are being set as goals, although 25-60 per cent live subhumanly in urban slums. In the metro area, we first need basic amenities for the most needy. It's taken for granted that many expensive public utilities in cities are essential for efficiency and improving the quality of life, even for attracting investment, but higher efficiency and better quality of life is needed even more desperately in rural India. Yet, we go on promoting modes of transports with more flyovers for private cars, energy- intensive luxury shopping or housing complexes. The majority of our ordinary citizens won't consume them but directly or indirectly have to pay for them. Farmers get less water, are starved of electricity. Clean drinking water or proper sanitation is a luxury.

With almost two-thirds of our workforce in agriculture producing about one-fourth of GDP, output per worker in agriculture is about 40 per cent; in industry and services it's double the national average. With a pronounced policy bias, industry appears more efficient than agriculture. Implied in this is also a game of attributing greater 'values' to selected products, which only the rich can buy and corporations can produce through large-scale destruction of livelihoods in both urban and rural areas.

Pro-people alternative industrialisation is feasible even in the present political-economic system. Very briefly, it has to be based on three basic premises. First, we must learn to rely far more on the internal rather than the external market. The biggest driving force of the internal market is the purchasing power of ordinary people derived from employment growth. India's recent record of 8 per cent growth in output with 1 per cent growth in regular employment is dismal but understandable. Corporate-led industrialisation can't do much better, because corporations are in the game of making profit by cutting costs, including of labour. The more we accept globalisation unconditionally—placing greater importance on the external market—the stronger the compulsion to cut labour costs to increase exports. The primacy of exports distorts our priorities, like justifying SEZs for export promotion.

Second, economic growth must be driven by employment growth. How effectively employment contributes to output would depend on how productively labour can be used. India has performed poorly in this respect because of a bureaucratised system of central control. We have to act on two fronts simultaneously. On the one hand, we need to break the grip of corporate-led industrialisation, on the other replace the current centralised bureaucratic decision-making. This can be done by ensuring local control over local resources related to land, and maximum fiscal autonomy and decision-making power to the panchayats to identify, formulate and execute local projects. This could help extend the present NREGs to an ambitious time-bound full employment programme. Article 243 of the Constitution provided for a finance commission to ensure the financial viability of village/ward level local bodies. No government, central or state, followed this up. Kerala's record has been the best; and West Bengal's among the worst. Despite the Left's role in getting NREG enacted, it is shocking that in West Bengal itself only 14 per cent of the money allotted in the poorest district of Purulia was spent, and that more than half the money for employment guarantee provided by the Centre remained unspent till December '06. The result was that only 16 out of 100 days of employment was provided for. (Reports from other states are similar except for certain areas). If governments had shown the same zeal in making a success of the NREGs as they have in acquiring land from unwilling peasants, we'd have taken a step toward a genuine process of development.

Finally, the Fiscal Responsibility and Budget Management Act, 2003, has to be reconsidered. With this law, the Centre pushes privatisation to raise money, denies social security in the unorganised sector, cuts basic health and education spend. It restricts the role of public policy in the name of financial discipline to please the World Bank and IMF. Instead of fighting its biggest economic battle here, the Left went along with the neo-liberal ideology with only a whimper of protest, and concentrated on corporate-led industrialisation.

To ensure effective local spending, panchayat budgets should be in a separate account with credit line extended via nationalised banks to avoid duplication of institutions. Such decentralised rural industrialisation has to be the focal point to impart a genuine democratic content to India's development. This is our way forward.

(Amit Bhaduri is an economics professor at University of Pavia, Italy. Medha Patkar is a social activist.)

Finger Off The Paper