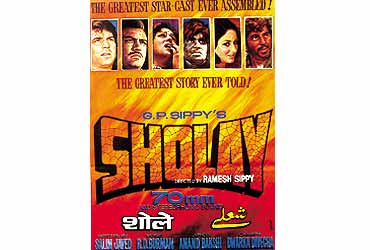 There’s little left to say about Sholay. Easily the most watched Hindi film of all time, Sholay’s also been written about and dissected the most. Academicians have called it a combination of Seven Samurai, The Magnificent Seven and Mera Gaon Mera Desh. But this "curry" western transcends its roots with a distinctive narrative, vision and style all its own.

The plot, if you didn’t know, goes thus: Thakur Baldev Singh (Sanjeev Kumar) of Ramgarh hires two small-time crooks, Veeru and Jai (Dharam and AB), to capture dreaded dacoit Gabbar Singh (Amjad Khan), the man who murdered his entire family. The novelty lies in how the tale’s told. Salim-Javed’s legendary screenplay is packed with innumerable subplots, digressions, comic skits and three long flashbacks. In fact, it’s structured like a series of small films. So you remember each scene distinctly; whether it’s Asrani’s the Great Dictator spoof or a drunk Veeru atop a water tank declaring his love for Basanti. And yet all these sequences coalesce into a perfect whole. The spectacular, long opening scene of a dacoit attack on a running train remains the most kinetic opening in Indian cinema.

Sippy offers liberal doses of comedy, romance and emotions delivering as complete an entertainment package as you can get. And, of course, the cult dialogue—in a gritty Hindustani flavoured with all shades of dialects—has some of the most memorable screen lines ever.

Sholay lends itself to microscopic viewing: you remember RD’s foreboding background score, catch even the most throwaway turn of phrase, and the most minor of characters stays with you—be it Basanti’s mare Dhanno or Keshto Mukherjee’s stool-pigeon convict. Sholay is spine-chillingly brutal but little ketchup ever spills on screen. Violence never seemed so easily consumable or else why would the menacing Gabbar be one of Hindi cinema’s most enduring icons ever?