The Year India won the war and Gavaskar was born. 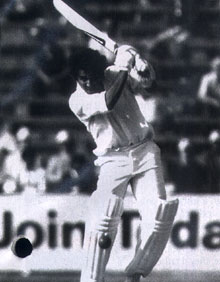 Nineteen seventy-one was a momentous year for India. For the first time in 2000 years, Indian forces won a war against a foreign enemy, when they beat Pakistan to liberate Bangladesh; and for the first time, after almost 40 years of trying, India won a Test series in England, shortly after winning one in the West Indies.

The spread of cricket is a consequence of colonialism. Cricket is an English game, and was one of England's cogs in their quest to 'civilise' their colonies. Australia, India, Pakistan, Sri Lanka, the West Indies, all learnt the game when they were part of the British empire, and it wasn't ananomaly that the I in ICC originally stood for Imperial, before political correctness caused it to be changed to International.

Australia threw off their colonial baggage early enough, but for most of the other Test playing countries, it took time. For years India and Pakistan played the game with a sense of inferiority that almost seemed genetic. Wicket keeper Budhi Kunderan once recounted how, when India toured England in 1967,manager Keki Tarapore would go 'crawling to the English', squeaking inanities like "we have come here to learn". During Pakistan's tour to England in 1971, their manager had given a speech at a dinner thanking the Brits for graciously teaching the Pakistanis how to play cricket, and how to use knives and forks.

It was no wonder then, that at the beginning of the 70s, there were two tiers in world cricket, one consisting of England, Australia and West Indies (since the 50s), and another of India, Pakistan and New Zealand. Second-tier teams were not taken seriously by first-tier teams, and India's performances before the 1971 tour indicate that they didn't deserve to be. India's history was replete with individual brilliance and moments of promise, but never a streak sustained enough to make the world take them seriously. Once in a while they'd beat one of the better teams in a Test, but it was sporadic, and mostly at home. A few small battles; but never the war.

The overseas series victories of 1971 - first against West Indies and then against England thus marked a paradigm shift in International cricket. The two teams had just beaten Australia and Pakistan, and by beating them, India could suddenly claim to be world champions. India followed up the twin-victories by beating England at home in 1972-73,and remained on their pedestal until a disastrous tour of England in 1974; a period of three years at the top of the pile.

Besides the boost the wins gave to India's self-belief and confidence, the wins of 1971 were also significant because they saw the emergence of a man who would be the face of Indian cricket for a decade and a half, and a progressive force in the game. It is fitting that Sunil Gavaskar made his debut during one of India's proudest moments, when they notched up their first Test victory in the West Indies, at Port-of-Spain, Trinidad. A flame was lit in Indian cricket and Gavaskar would be the man to carry the torch.

Gavaskar marked a bridge between generations during a period of transition. He was arguably Indian cricket's first true professional; before him, cricketers played with an amateur ethos because they loved the game, and were often grateful simply to get the chance to play England and Australia, and to tour. When the game began to draw in big bucks, the players continued to get pittances, and be exploited. Gavaskar stood up for player rights and took on the Indian board in demanding better pay and more reasonable contracts for players. He also realised early on the value of his brand, and wasn't shy of doing endorsements so that he would also gain something from his super stardom. An entire generation of Indian cricketers followed in his footsteps. The poverty he rifled Indian cricket out of wasn't just metaphorical.

It helped that he was one of the best players of his times. The first Indian to be applauded unpatronisingly-as one of the all-time greats, he broke virtually every batting record in the book mere was an old myth, created by Fred Trueman's exploits in 1952, that India couldn't play genuine pace. He busted that myth, with 13 centuries against West Indies. He stood tall against the best attacks in the world and, wearing his heart on his sleeve, won their grudging respect.

Gavaskar demolished the colonial hang over that existed before his time, at least in cricketing circles. Although the English made much of it, it mattered little to him that he never made a Test century at Lord's, which the Brits proudly refer to as the home of cricket. He even refused membership to the MCC, an act no Indian could have contemplated before him. He would bow before no one and played the game with self-respect and pride. He transmitted those emotions to the rest of the country, and there was no better war to win.

Thirsting For The Blue Diamond