In the 1960 Rome Olympics, most of the spectators had never seen a Sikh before

Milkha Singh, Sprinter, Commonwealth Games Gold Medallist
There was little fanfare about sports in 1960. Equipment was difficult to come by—no running shoes were manufactured in India, and nobody knew what a tracksuit was. But there was a lot of patriotism. When I became the first Indian to win a gold at the 1958 Commonwealth Games, Nehru sent a message asking if there was anything I wanted...I requested a national holiday! 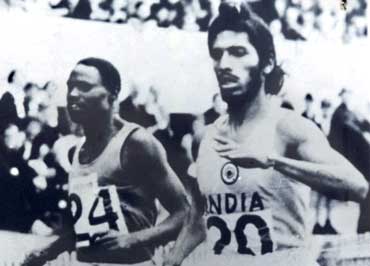 Lookin' back: Milkha Singh misses the 400m bronze by a hair's breadth

In the 1960 Rome Olympics, most of the spectators had never seen a Sikh before, and I was cheered as "the saint". Our country has neglected our sportsmen, except for cricketers. In the 1956 Olympics, our football team got to the semifinals, and we were the world leaders in hockey till 1964. Now we can’t even qualify. But individual efforts matter, and when my son (golfer Jeev Milkha Singh) was awarded a Padma Shri, we became a family with two such awards. Sadly, we are the only one.