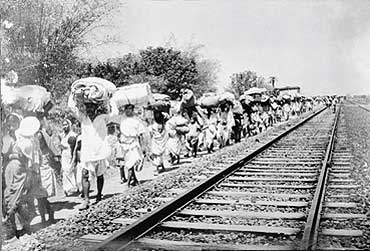 Did India have to be partitioned? When the British left, could they have left a single country behind? Ever since 1947, such questions have been asked. In the wake of L.K. Advani's visit to Pakistan, they are now being asked anew. And in the process of being answered, they bring forth a supplementary question—why was India partitioned?

The answers to this last question vary widely, depending on the nationality and political affiliation of the person asking (and answering) it. Pakistanis insist that it was the Hindu orientation of the Congress, promoted above all by Mahatma Gandhi, which forced the Muslims to seek a separate homeland where they could live free of the fear of Hindu domination. Congress-minded Indians answer that it was the political ambitions of Jinnah that led him to stoke divisions between Hindus and Muslims, and, thus, to promote himself at the expense of a united India. Some Indians opposed to the Congress tend to blame Nehru, who, they claim, was so keen to grab power in 1947 that he would not wait for a harmonious solution. Others, such as those in the saffron camp, blame Gandhi for being too soft on the Muslims, encouraging them in the project of a separate homeland.

In truth, Gandhi, Nehru and Jinnah were all responsible, albeit in varying degrees, for catalysing the processes that led in the end to the Partition of India. Although deeply committed to Hindu-Muslim harmony, the Mahatma's manifest religiosity and his talk of Ram rajya did put off many Muslims. Although deeply committed to secularism, Nehru did display a certain arrogance in dealing with the Muslim League—particularly after the elections of 1937, when he refused to allow the Congress to enter into a coalition with the League in UP.

Gandhi and Nehru made mistakes out of ignorance or arrogance. But Jinnah, the third point in this fascinating triangle, chose deliberately to stoke the fires of division in deliberate pursuit of a communal politics. In his early political career, he was indeed an ambassador of Hindu-Muslim unity (as Sarojini Naidu called him). In his private life, he was undoubtedly agnostic, perhaps even irreligious.

However, from the 1930s, and especially in the 1940s, Jinnah mobilised the Muslim intelligentsia, and later the masses, in a project that put paid to the older ideal of a 'composite culture' of Hindus and Muslims. The 'Pakistan' resolution of March 1940, and the spread of the Pakistan idea for the rest of the war (when most Congressmen were in jail) resulted in the League's notable victory in the 1946 elections, when it swept the Muslim vote. Then followed the failure of the Cabinet Mission, Jinnah's call for a direct action day on August 16, 1946, and a wave of bloody riots throughout India. Now, Partition became unavoidable, whatever Gandhi, Nehru, or indeed Jinnah may have done to resist it.

Partition could, perhaps, have been averted if various politicians had behaved otherwise in 1925 or 1935. But by the end of the Second World War, or perhaps even earlier, it had become inescapable. In this historian's view, it is the 1946 elections that are crucial here. They pointed to a decisive religious polarisation throughout India, with the Muslim seats going overwhelmingly to the League, the Hindu seats to the Congress. A decade of dogged mobilisation had led to a comprehensive victory for the idea of political separation. Now, Partition could not be stopped, even by Gandhi's enchanting offer of the top job to Jinnah in a united India.It was an offer Jinnah had to refuse—for how would he be a prime minister in a Congress-dominated legislature? And, how would he face his own followers, the activists and ideologues who had become so obsessed with the dream of a separate Pakistan?

Let me leave you with a final question—even if Partition was unavoidable after 1946, did it have to be accompanied by such massive bloodshed? Although a proper answer would require a separate article, my own belief is that the process could indeed have been managed with less loss of life if Lord Mountbatten had not been in such a hurry to get it over with, and if he had carefully placed his troops in position well before the handover of power, as his aides had advised him to.