Small investors with wily strategies brave the vagaries of the stockmarket 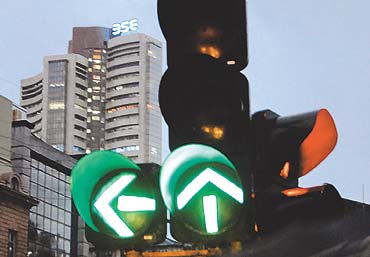 outlookindia.com
-0001-11-30T00:00:00+05:53
Just over four years ago, at a sports club in Delhi, a few young table-tennis players were talking about their investments in the shares of state-owned oil PSUs. They were excited about the possible profits as the then disinvestment minister, Arun Shourie, was set on selling the government's stakes in these entities. Almost a year later, they admitted they had sold their holdings in the oil firms at a loss after the current government said it would not disinvest from profit-making PSUs.

About 10 days ago, when the Sensex crossed the 15000 mark, they were cursing their luck. If only they had held on to those shares, they would have made a killing. Each of them calculated their possible paper profits—Rs 5 lakh, Rs 10 lakh, Rs 2.5 lakh. It is a common perception that the common (retail) investors rarely make money in any bull run. In fact, they are the ones who are left holding the dud scrips when stockmarkets correct viciously. For example, in May 2006, they incurred huge losses when the Sensex went into a free fall from 14000 points to under 10000.

Since the Bombay Stock Exchange (BSE) index has bounced back unexpectedly to even higher levels, we decided to do a reality check. Do small investors ever make money? Does any stockmarket work in a democratic manner? Does it distribute wealth across different segments of investors? Or does it, like a typical capitalist system, reward the few who are already rich and elite? Does the trickle-down theory, or money percolating down to the lower socio-economic sections, work vis-a-vis bull runs? 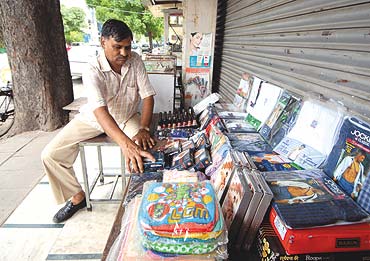 Naresh Mittal, Shopkeeper, Has shares worth Rs 10 lakh. "For the past year, I have switched from one stock to another. It has so far been profitable."

One of the first investors we met was Naresh Mittal, 52, a former paanwallah, who sells cosmetics and undergarments on the street after his shop was recently sealed. Mittal is one of the lucky ones to have made money during the current boom: he sold Rs 10 lakh worth of shares for his daughter's wedding last year and still holds shares worth a similar amount. "For the past year, I have not cashed out, but switched from one stock to another. I started dabbling in stocks in 1992; thankfully I have suffered losses only in a few cases. Overall, my investments have been profitable," he says.

Another "lucky" one is K.S. Bakshi, who works for a nationalised bank. The bulk of his portfolio of Rs 5 lakh is through initial public offerings (IPOs), with only 25 per cent invested in the secondary market. "Sometimes, I feel like booking some profits. I have placed sell orders to at least recoup my initial investment. After that I will feel safe to play it out," he explains. Unlike many small investors, Bakshi reads all financial papers, and never buys on the basis of hearsay. Encouraged by his success, his daughter has also started dabbling in stocks. 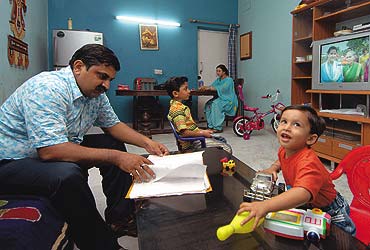 B.N. Pathak Marketing employee, has a Rs 2.5-3 lakh portfolio. He "buys regularly, but sells only when the market is high". Invested in bonds and MFs.

B.N. Pathak, 41, who works for an agricultural marketing firm in Uttar Pradesh, is also a "safe player". He doesn't want to lose money, so he "buys all the time, but sells when the market is ruling high." With a portfolio of Rs 2.5-3 lakh, he switched mainly to mutual funds, debt-related funds and bonds after witnessing last year's market volatility. "I wanted to invest in the recent DLF IPO, but had exhausted my money. Now I plan to buy Omaxe," he says.

Unlike Bakshi and Pathak, Carmo Barretto, 37, a Mumbai-based general manager in a resort, burnt his fingers by investing in the so-called penny stocks during the late 1990s and early 2000. Many other investors too went through such harrowing experiences during the Ketan Parekh scam in 2001. But now Barretto has become a bit smarter. "I changed my focus to buying into cash-rich, dividend-paying firms. Around 3-4 years ago, I collected Rs 70,000 and invested in stocks which met this criterion. It has given me returns of over 100 per cent," he explains.

All these investors share a few common things. They are largely serious players, not speculators like those TT players. They are not seeking quick returns. They are in the market for the long term, and look at their portfolio as an investment-savings strategy. They seek advice from experts—brokers, newspapers, business channels—and don't get swayed by rumour. And they believe in India's growth story, like a number of domestic and global institutional players.

Says Mihir Vora, head, equities, at HSBC: "We are still expecting an 8-8.5 per cent GDP growth, which means overall a 15-20 per cent earnings is still expected growth wise." An Enam Securities report (July 9) stated that the "deceleration of India Inc fundamentals at the margin level due to higher costs is offset by increasing volumes and superb long-term transformational strategies." Based on such unending optimism, retail and small investors too believe that the Sensex can scale even higher levels.

"It is still a wait for a bigger rise," says Bakshi. The market, feels Amitabh Sharma, a shop owner whose portfolio of Rs 40,000 has grown to Rs 3 lakh, will "continue to grow unless there is a scam which can shake off investors' confidence." He believes that the construction sector will do well for the next two years as the Commonwealth Games' frenzy reaches fever pitch in the National Capital Region. He also favours software and telecom, as they are doing well and have government support.

But Shubhada Rao, chief economist, Yes Bank, sneaks in a caveat: "The growth impetus is still intact in sectors like engineering, but there will be a redistribution and moderation of growth across sectors." Globally, says Andrew Holland, MD, DSP Merrill Lynch, "all indices have been hitting new highs and India is not alone." Obviously, if the global rally were to be impacted, India will not be left alone. Unfortunately, says Holland, "Markets worldwide are looking tired." 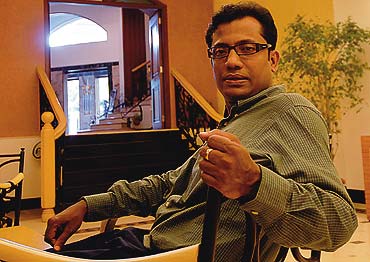 Valuations in many markets would have looked stretched, if one discounts the effects of mega mergers in the US and Europe. There are rumours that international credit rating agencies may downgrade the American housing sector that was largely responsible for the US economy's growth in the past four years. This can affect the flow of global money. If the Yen were to appreciate, it may lead to volatility as a large component of foreign investment in emerging markets is designated in the Japanese currency. "These are caveats one would have to continuously monitor," says Rao.

What is even more worrisome is that there are some doubts on the quality of the money that is now flowing into the Indian stockmarket. "We feel a lot of money that is coming in Indian equities in the past few months is from very new investors. Some of it might be hot money. This makes us a little concenred," says HSBC's Vora. Other experts have consistently talked about the flows through the participatory notes mechanism, which can also fly away at the slightest hint of a risk.

Others, however, contend that all markets are plagued with such risks. They add that there is a renewed interest among non-resident Indians (NRIs) and other foreign investors about India's potential. Norman Lakhani, the US-based NRI, admits that there has been a surge in interest among American NRIs. "The interest has been contagious. It is also natural for us to get involved with India," he adds. For Mayur Dalal, CEO, New York-based The Legacy Planning Group, the driving force has been the fact that "as Indian-Americans grow older, their love for India deepens. The boomers, comprising 2.2 million Indians with the highest per capita income, have plenty of money to invest."

Many NRIs are also looking at other emerging markets like Vietnam after making a killing in Indian stocks. One shouldn't forget the rising interest amongst Americans. Says Bimal Amin, the New York-based CIO who manages money for an American family, "I turned to Indian markets in 2004 and it's a decision I haven't regretted." Raj Agarwal, president, India Investment Advisor, says, "Non-NRI Americans who have invested in India outnumber NRIs. Some are chasing growth."

So are Indians like Tina Rawla, Vinod Kesnani and Suresh Sidha. Rawla, whose portfolio has grown 20 times to Rs 9-10 lakh in three years, is a day trader-turned-investor. "Day traders often panic. I lost money during the stockmarket fall last year. I panicked and sold stocks like ACC, Infosys, and Unitech only to see them rally around. This time, not only do I not have time to track the market constantly, I will wait and may book profits only on a few stocks," she says.

Kesnani, who started with Rs 7,000, and now invests up to Rs 15,000 every month, became an investor when he was still in college. "I had studied about it, so I took the plunge to see what it was like," he explains. Sidha, 50, a Bank of Rajasthan employee, began investing in the pre-Harshad Mehta days, when the market was on an upswing, but quit after the scam. Sidha came back to the stockmarket in 2003-04. Like other small investors, who are pinning their hopes on the Sensex reaching 18000 or, even better, 20000. Will the Sidhas and Barrettos lose their money this time too?