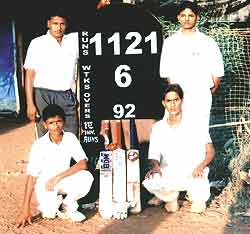 This will warm the cockles of any Indian cricket fan. Playing in the Harris Shield inter-school cricket tournament, a Mumbai team has broken one of cricket’s oldest records—the highest-ever total in all forms of cricket. Anjuman-I-Islam Allana High School notched up a total of—hold your breath—1,121 for 6 declared. This broke the existing record of 1,107 runs notched up by Victoria against New South Wales in the Sheffield Shield in 1926-27. The mammoth total was registered in a match played between Dec 7-9 against St John Baptist High School, Thane, at Mumbai’s famed Cross Maidan. The actual total was 989 for 6 declared. But Anjuman gained 132 bonus runs as their opponents bowled 11 overs short. The hapless boys from Thane were later skittled out for 46 and 145 in their two innings, losing by an innings and 930 runs—also a world record.

"We were not playing for records," Anjuman’s coach Naushad Khan later clarified. "We had to improve our run rate to make it to the semifinals. So the batsmen were instructed to plunder as many runs as possible in quick time." In fact, the run rate was over 10 an over as Baptist bowled only 92 overs. The top scorer in the innings was Shishir Tiwari with 318 (40 fours, four sixes). His stand with Sufiyan Shaikh (202 not out) for the fifth wicket was worth 531 runs and at one point threatened to overtake the record Sachin Tendulkar-Vinod Kambli partnership. These two scored 664 runs for the third wicket in February 1988 in an Harris Shield match. It still remains the highest stand ever in all forms of cricket.

The record-breaking performance of the Anjuman School has been much applauded by the cricket establishment in Mumbai. Says former India opening batsman Lalchand Rajput, now president of the Mumbai Cricket Association: "If they can bat so well and hit such huge scores at this age, it goes to show their potential." So has Mumbai thrown up another Sachin or Gavaskar?

All In Quick Time