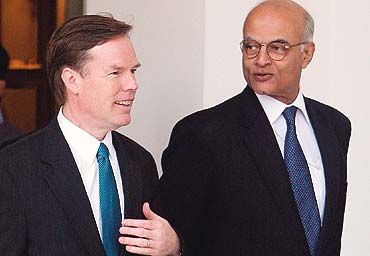 Indian and American negotiators are finding out the hard way that hammering out a deal is not as easy as 123—ironically, the numerals name the section of the Atomic Energy Act (AEA) which governs the civil nuclear agreements between the United States and other countries. A technical-level meeting in London last week failed to achieve a breakthrough, delivering yet another blow to the optimism expressed following the meeting between under secretary of state R. Nicholas Burns and foreign secretary Shiv Shankar Menon in Washington on May 1.

The failure to achieve a breakthrough surprised a congressional source, who said many of the disagreements appeared to have been ironed out in the May 1 meeting. "The fact that there has suddenly been a coyness is interesting," the source told Outlook. A State Department official said this sort of backsliding was a constant feature in protracted negotiations: whenever the two sides believed they had some issues nailed down, "some arrangements had gotten unravelled" when negotiators returned to their respective capitals.

Going into the May 1 meeting, Burns had decided upon the strategy of arranging the deal's seven "problem areas" in order of difficulty. The most difficult were be set aside and easier ones "crossed off first", the State Department official told Outlook. "As we get four or five issues finished we'll have a process of making some progress, and as we get closer we will see light at the end of the tunnel," he said, admitting this approach hadn't entirely worked so far.

Of the seven "sticking points" responsible for the deadlock, India's insistence on the right to test nuclear weapons is proving to be the most contentious. The AEA stipulates an end to nuclear trade in the event of a partner testing a nuclear weapon and grants Washington the right to seek the return of nuclear material and equipment subject to the agreement.

Fred McGoldrick, a former State Department official who has helped negotiate some civilian nuclear agreements for the US administration, says there are "areas of flexibility" on this problem. He told Outlook that though the AEA says the US has a "right to return" if a partner tests a nuclear weapon, this is not a "requirement". The US could only take back unused fuel. "We can't take back spent fuel or the reactors,# that won't be practical," McGoldrick said. Other nuclear agreements include a provision to compensate the country for the value of the equipment that the US wants returned. McGoldrick suggested the Indians could look at these agreements to nail down this issue.

An alternate solution to the question of nuclear testing would be a presidential waiver of the requirements of US law. The president has the right to use this waiver if he thinks it would be in US interest. However, this waiver could be overturned by subsequent presidents, a situation India can't be happy with.

Also high on the list of sticking points are the types of safeguards to be agreed upon and end-use verification. Currently, India allows permanent, facility-specific safeguards for six older reactors. For eight other reactors it will place under safeguards by 2014, New Delhi wants India-specific safeguards from the International Atomic Energy Agency (IAEA) that would be suspended if foreign fuel supplies are interrupted. "The main issue is whether the safeguards will be kept in perpetuity," says Daryl Kimball of the Arms Control Association. "No safeguard agreement exists to accommodate an India-specific agreement contingent on supply of nuclear material."

Linked to this is the issue of "fallback safeguards", which the US seeks to enforce in the event of the IAEA's inability to fulfil its safeguards mandate due to budgetary or personnel strains. Kimball says these are not required under the AEA or the Hyde Act, which empowers Washington to cobble a nuclear deal with India. This is a demand the US could back off from as a compromise.

India is also seeking relief from provisions that prohibit the transfer of nuclear technology to India, including uranium enrichment, plutonium separation, and heavy water production-related equipment, except under certain narrow circumstances. Indian officials also want the US to give advanced long-term consent to reprocess nuclear material subject to the nuclear agreement. Such exceptions have only been made for Japan and EURATOM (Eurpoean Atomic Energy Community), and negotiators involved in those talks say they were "extremely controversial" in Congress.

Another area of disagreement is "sequencing"—the US wants India to conclude the 123 Agreement and follow this with a safeguards agreement with the IAEA before the Bush administration asks Congress to vote on agreement. But India wants congressional approval before it starts negotiating with the IAEA.

Once both sides finalise the 123 Agreement, it must be sent to Congress for approval. While the Bush administration has floated the prospect of "concessions" for India, further changes to US law will meet stiff resistance. A congressional source told Outlook that lawmakers had spent much time making India-specific changes to US laws. "There would be opposition to the US government saying it needs one more change," he said, adding, "In the rare case that we agree to a change, it would be a minor one. If the government wants, we may be open to an exchange."

But this 'exchange' would mean Congress imposing more conditions (for instance, Iran), which India won't like. "Now is the time for the Indians to do their job," the source said, adding, "The Indians have brought nothing to the table but attitude and thinly veiled threats." The "key" to Congress will be verification that the processes and material shared with India will be used only for the stated purpose.

In a speech at a Washington think tank on May 23, Burns said: "Like all good things, (the nuclear deal) will continue to require hard work and difficult compromises to reach completion." He predicted the two sides "will reach the mountaintop." But both sides acknowledge there is still plenty of climbing to be done. Perhaps the final momentum for the deal could come when Prime Minister Manmohan Singh and Bush meet at the G8 summit in June.

'I Didn't Do It For Income'