The prosperity of India's middle class is showing: in its burgeoning waistline 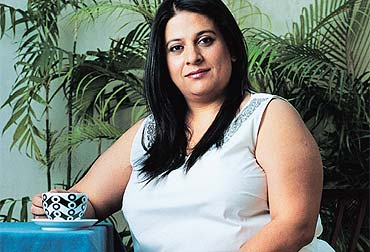 outlookindia.com
-0001-11-30T00:00:00+0553
Chubby baby Sanjana brings a smile to everyone’s face as her mum brings her into a bustling south Delhi clinic. In minutes, the mother’s pride turns to dismay as this six-month-old registers 12 kilos on the digital scales. This is more than double Sanjana’s age-appropriate weight.

Tapan Bose, a software professional in Calcutta, ballooned from 75 to 95 kilos due to a totally desk-tied job. It triggered off such severe depression, diagnosed as dysmorphophobia (a feeling of ugliness), that he had to be hospitalised.

A diabetes diagnosis just before Anjali Dayal’s 30th birthday destroyed all her party plans. With her eyesight failing and hair prematurely greying, this Delhi-based editor’s life-mission now is to rid her blimp-sized body of 25 killing kilos.

Hold up a mirror to urban middle-class India today and clinical profiles are reflecting the unshiny truth about our otherwise pleasing 8 per cent economic growth figure. Our middle class is growing more prosperous, but it’s showing up in swelling midriffs. Slowly and dangerously, almost like our national map, Indians are now getting widest at the centre. Medical experts are ringing the alarm bells, announcing that obesity is an urban epidemic whose incidence is spiking sharply. Today, according to medical experts, data from many cities shows that up to 25 per cent of the urban population is obese; ten years ago the figure was just 7 to 9 per cent.

Doctors say childhood obesity is increasing even faster (see We Do Need Food Control). Just recently, Maharashtra’s Food and Drug Administration, concerned about the rising rate of childhood obesity, has suggested a statewide ban on the sale of colas and junk food in school canteens. A timely intervention, for studies now pouring in show that Indians have a strong genetic predisposition to becoming overweight and obese (see When Fat Turns Fatal).

Like it or not, we are ensnared in lifestyles that make it easier than ever before to accumulate those extra kilos. The way we eat, drink, work and live today is reflected in drastic changes in our health and nutrition patterns. Post-globalisation, we are still the world’s largest vegetarian nation, but the quantity of vegetables a child eats today is negligible and dwindling. Medical and marketing data shows another disturbing connect—eating out, which now commands 10 per cent of our wallet share, is causing a lipid build-up in our blood and bodies. Occupationally, as the outsourcing industry develops, so does the BPO belly. And while drought might stalk our rural landscape, our city fridges are in permanent harvest. Urbanites are consuming 80 per cent of all edible oil in India. Within homes, sedentariness is on the rise. Even as TVs are getting slimline, our viewing hours are getting longer and viewers fatter. Mirroring this extreme shift, there are now hospitals in most metros offering bariatric surgery, considered a life-saving procedure for the extremely obese (see A Little Tummy Tucking).

Urban India is now in a state of calorie excess, say all obesity experts. "Even the rural classes are inching towards obesity, while the urban middle class, particularly children, are a cause of extreme worry," asserts Dr Anoop Misra, presently director and head, Department of Diabetes and Metabolic Disorders at Fortis Hospital, and formerly with AIIMS. His recent study of 1,900 schoolchildren in the capital found that 18 per cent had abdominal obesity and complications like diabetes, hypertension and bad lipid profiles. If these kids were addicted to junk food, their future is all set to get unhealthily saltier, oilier and sweeter with Budget 2006 bringing down the prices of colas, ice creams and processed foods.

Weighing scales aren’t enough for fat calculation. BMI or Body Mass Index is the accurate method of obesity assessment. This is measured by dividing your weight (in kilos) by your height2 (metres squared). Internationally, BMI 30 is considered obese. But experts have recently lowered obesity definitions for us. This is since one-fourth of adult urban Indians show metabolic disorders at lower BMIs than other racial populations, which predisposes us to diabetes, hypertension and cardiac disease. 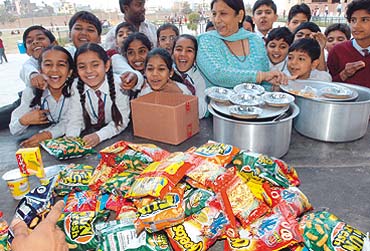 Junk food may be banned in Delhi schools, but oily, processed chips are available freely in the canteen

Today, a BMI up to 22.9 is normal, 23-25.9 is overweight, 25 and above is considered obese. This means Raman, who weighs 75 kilos and is 5 feet 10 inches (1.75 metres) tall, is overweight since his BMI is 23.9. At 90 kilos, his BMI would be 28 which would make him obese. It’s not entirely Raman’s fault, as we are genetically programmed for smaller food and lower calorie intake, so an excess intake of sugar, starch and fat becomes hazardous resulting in the quicker onset of obesity among children and adults in India.

Obesity also thrusts us on a risk continuum of chronic diseases that progress from diabetes and hypertension to strokes and heart attacks. We are the world’s diabetes capital, and 70 per cent of it is obesity-related. Warns Dr K. Srinath Reddy, professor and head of cardiology at AIIMS: "These chronic diseases account for 54 per cent of all deaths in our country." A recent WHO report says India is seeing a pendulum shift from infectious to chronic diseases. While releasing this report some weeks ago in Delhi, Anbumani Ramadoss, minister of health and family welfare, said, "We have got to address chronic disease with utmost urgency. Economic losses due to chronic disease will cost us $236 billion from 2005-15."

But reversing this health burden means reorienting the entire health system. "Infectious diseases have cures, but with chronic diseases you get only care. Diabetes alone demands a minimum of six specialists during your entire life," explains Dr Cherian Varghese, who coordinator, Non-Communicable Diseases in India. A diabetes diagnosis at age 30 implies 30 years of treatment and medical dependence. And we’re not factoring in other complications like cardiac disease yet. 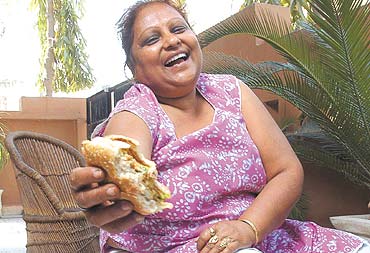 Obesity data remains scattered between paediatricians, psychologists and almost every medical specialist there is. In Delhi, Dr Archana Arya, paediatric endocrinologist who is now used to seeing obese babies, says: "When babies cry, mothers put a bottle in the mouth. As the child grows, its first response to stress is to eat." Endocrinologist Dr Shaukat Sadikote at Jaslok Hospital in Mumbai says: "The average age of adult diabetes was 40, today it’s 16. Everyone has the latest Nike shoes, but who is exercising?" Dr Gita Arjun, a gynaecologist-obstetrician who runs the E.V. Kalyani Medical Centre in Chennai, rifles through her patient records before saying: "Almost 50 per cent of my non-pregnant patients between 31 and 40 weigh 70 kilos or more." Well-known psychiatrist Dr Siliditya Ray in Calcutta, who regularly deals with obesity cases, is still disturbed by Arijit Ghosh, a 12-year-old, brought into his clinic after attempting to commit suicide twice within a span of six months. The cause? Arijit’s body weight which had spiralled to 90 kilos.

Trapped in an obesogenic environment, we are bloating. A recent study by the Mumbai Obesity Research Group says a family of four gains up to eight kilos for every mechanical gadget acquired. A TV, airconditioner and car account for 24 kilo of extra weight. Finger-punching is our main form of exertion, be it with mobile phones, remote controls, playstations, computers or microwave ovens. Besides, with 94 major malls set to open across India by the end of 2006, more of us will while away our weekends following the aroma of freshly-baked Australian cookies or chomping on caramel popcorn at the movie halls. "I see food, I eat," says Angana Dalal, a tubby TV producer in Mumbai, who can swing the needle to 87 kilos when she plants both her feet on the scales.

Women are also among the most affected. A first of its kind study done on 200 post-menopausal women in Delhi has revealed obesity to be as high as 67 per cent. "Hormonal factors are an issue, but the main issue was excess food intake where dietary fat percentage is high and quality poor," says principal investigator, Rekha Sharma, chief dietician, AIIMS.

Veena Katyal, a homemaker in Delhi, thanks her daughter for helping her return to normal life. After she hit the high 80s on the scale, she recalls, "I’d dress up, wear make-up and look at my fat self in the mirror and wipe it all off and get into bed. My daughter would say ‘Mama, lose weight, you’ll become pretty again’." Veena did. Today she works with her nutritionist Ishi Khosla as a Zero-Oil Cookery expert, demonstrating lite pastas, no-oil stuffed karela and sweet but sugarless kheer for corporate houses. She also makes 150 kilos of Slimmers Atta a month, a non-wheat flour for rotis, which retails at health stores in Delhi.

Simple preventive measures like healthy eating can save lives and money. That’s why minister Ramadoss introduced a personal load-shedding plan for all of us recently, inaugurating www.foodpyramidindia.org. It’s a dynamic website that allows us to calculate BMI along with suggesting a healthy diet for Gujaratis, Punjabis and Assamese.

But transforming our obesogenic environment will take more than a health minister. The urban development ministry needs to pave the way with many more walking tracks, public parks and cycle lanes. The sports and youth ministry needs to promote neighbourhood sports. The agriculture and food ministries will have to introduce proper food labelling. The commerce and trade ministry must explain why it reduced duties on vanaspati, a trans-fat that is jeopardising the hearts and bodies of the poor. I&B will have to do its bit to ensure that healthy eating is promoted by the media. 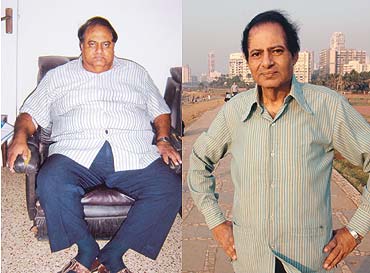 This policy change is vital. As India urbanises, more of our population will succumb to obesity-related chronic diseases. A study which compared middle-aged adults in rural Haryana (average BMI 19.5) and urban Delhi (average BMI 24) showed a fourfold rise in diabetes, threefold rise in hypertension and twofold rise in heart attacks in the latter.

Criticising Budget 2006’s cola and ice cream price cuts, Dr Reddy observes, "Perhaps the finance minister is not fully aware how much he could influence health, more than all the doctors in India, by subsidising fruits and vegetables."

But we can’t blame it all on the babus. We need to mind our bodies. Says Dr Sadikote, "If you are 25 kilos overweight, by shedding five per cent of your weight, you cut your diabetes and heart disease risk by almost 50 per cent." Polycystic Ovarian Disease (PCOD) is common among women. Dr Arjun says, "If women with PCOD reduce five per cent of their weight, this induces ovulation." The impact of osteoarthritis can also be reduced with weight loss.

For people like Arijit Ghosh who went into the abyss, his positive self-image returned only after psychiatric treatment, yoga, diet, counselling and low doses of anti-obesity drugs. Anjali has given up the 5 pm gulab jamuns and her lavish Sunday brunches. After knocking off 22 kilos, she now has fewer panic attacks about her teeth falling off from her gums, her toes being sawed off or losing her eyesight due to diabetes.

But life-makeovers also need multiple backing. At the British Gas office in Mumbai six months ago, to encourage healthy eating among employees, they revamped the cafeteria menu. They added soups, salads and calorie counters, along with fruit baskets in the meeting room. Says HR manager Rajeev Singh, "These changes were a hit with our people." At schools like DAV in Delhi, kids are asking their mums to pack their tiffins with sprouted moong, because a healthy lunchbox gets them five easy marks on their report cards. As for the rest of us? Let’s invest in our own health insurance by taking the stairs and not the lift, using an exercise bike or a home treadmill while watching TV, and by cutting back on sugar, starch and fat to reduce their dangerous effect on our abdomens and arteries.

By Pramila N. Phatarphekar with Jaideep Mazumdar in Calcutta, Harsh Kabra in Pune, Payal Kapadia in Mumbai and Madhavi Tata in Hyderabad

The Cost Of A Concord