As an access point to Madhya Pradesh’s wildlife circuit, Jabalpur features on many travellers’ itineraries. Here’s a quick and easy guide to exploring peaceful ghats, bustling markets, and local eats in this city by the Narmada.

In Madhya Pradesh, where poha-jalebi is a breakfast staple, no eyebrows will be raised at the prospect of eating a deep-fried sweet first thing in the morning. I wake up at the Wow Rooms homestay in leafy Bhim Nagar, where owner Sanjay Jain has ordered in plates of the flaky flattened rice, and spiral sweet from the local favourite, Kesarwani Sweets.

Built on a single granite rock at a height of around 500 m Madan Mahal Fort was the palace of Madan Singh, the tenth Gond king and son of Rani Durgawati.

Jabalpur is dotted with low-lying hills. After breakfast, we drive to the Madan Mahal area and park at the foot of a hill. Birdsong replaces city sounds as we make the 10-minute uphill climb, through a bamboo-lined path, to reach Madan Mahal. Also known as Rani Durgavati Fort, the four-storey structure, built atop massive boulders, occupies a vantage point on a hill. Built by Gond ruler Madan Shah as a military outpost in 1116, the deserted grounds now hold the crumbling remains of a step-well and stables. Climb the stairs to the ramparts for a sweeping view of the city below.

A minute away we stop at the curious sight of Balancing Rock. This rock appears to be precariously positioned atop a boulder, and seems to defy the rules of gravity, but it is in fact very stable and has maintained its balance over centuries.

Next, proceed to the centre of town, to the Rani Durgavati Museum, named for the fearless 16th-century Gond queen best known for fighting a Mughal army. The double-storeyed museum, with indoor and outdoor exhibits, houses 10th-13th century carved sculptures, excavated from Jabalpur and surrounding areas like Katni and Damoh. Carvings of bodhisattvas, tirthankaras, and Shiva and Vishnu images fill the galleries. Explore the coins gallery, housing British, Mughal-era, and Indo-Sasanian silver from the 7th-8th century. A bamboo-lined tribal gallery displays tools and jewellery used by Central India’s native Gond and Baiga tribes.

For lunch, head to Indian Coffee House, a Jabalpur institution. The salmon-and-baby-blue facade and regal interiors with arches and columns makes this Sadar Bazaar outlet the most atmospheric of its many branches. From its vast Indian and Chinese selection, I particularly enjoyed the creamy paneer bhurjee with hot rotis.

The Indian Coffee House in the Sadar Bazaar area of Jabalpur has high ceiling and arches, and is the oldest outlet of the chain in the city.

Just 10 minutes away, hidden behind a non-descript facade, the Mrignayanee Emporium is a delightful storehouse of natural, handloom fabrics, handmade by artisans from across the state. Yards of block-printed indigo dabu and red-and-black patterned Bagh fabric from the Dhar district catch my fancy. It’s fascinating to learn that Bagh prints use natural dyes like imli for red and jaggery-and-iron for black. It’s hard to resist the bed sheets, scarves, batik saris from Ujjain, and Chanderi saris from Chanderi, all packaged in cute little recycled paper bags.

Before the sun sets, take a drive past the Victoria Hospital, Clock Tower (locally known as Ghanta ghar), and the High Court, to admire some regal, British-era architecture. Though you can’t enter the court and the clock tower, the beauty lies in their facades. The red-and-white Clock Tower sits enclosed at a roundabout, dating back to 1919. With ornate spires, arches, and a grey brick facade, the impressive baroque-style High Court dates back to 1889, when it was built by Raja Gokul Das and designed by British architect Henry Irwin.

On the fringes of the city, Tilwara ghat is a quiet spot by the Narmada, from where some of Mahatma Gandhi’s ashes were immersed. It is mostly frequented by a handful of locals bathing in the river or visiting the Tilwadeshwar Mandir.

Evening arti at Gwari ghat on the river Narmada.

Next, head to Gwari ghat, half an hour away. At 7 p.m., the breezy steps by the Narmada River fill with locals who gather for the daily 30-minute evening arti, held behind the Guru Swarup Sidhnag Mandir. The lights of the Gurudwara across the river twinkle as five priests perform the ceremony, reminiscent in style, but not in scale, of Varanasi’s Ganga arti. The community vibe is palpable—people of all generations sing along with the bhajans, and mimic the actions of the priests. Offerings of diyas and flowers floating down the river are a magical sight.

After dark, the Sarafa market comes alive as people gather to feast on street food. Stroll down the main bazaar stretch at the heart of Jabalpur’s old city, crammed with crumbling havelis, jewellery stores, and brass utensil shops. Heaps of chikki sit on pushcarts, of which I buy a massive block of the light-as-air rajgira (amaranth seeds) variety.

A local girl with her puja thali at Gwari ghat.

Turn right at Kamania Gate towards Fawara. Here, you’ll find two icons on the Jabalpur food map: Badkul and Gatpat wala. I sample gatpat: boiled potatoes topped with sev, chaat masala, and potato chips, served in a leaf bowl. For dessert I cross the street to Badkul for the famous khoya jalebi. The sweet shop has stood at this spot since 1889, when Harprasad Badkul first created the recipe for the dark, spongy sweet. For a light dinner after the street food appetisers, stop at the in-house restaurant of the government-run Kalchuri Residency hotel, for a meal of Indian or Chinese staples.

Hours: none, but it’s advisable to go only in the daytime

Hotel Samdareeya is a large, mid-range hotel with a business feel, near the smart Cantonment area.

Tariff: Doubles from ₹2,495 per night including taxes.

A packed weekend of exploring a city, a stunning natural... 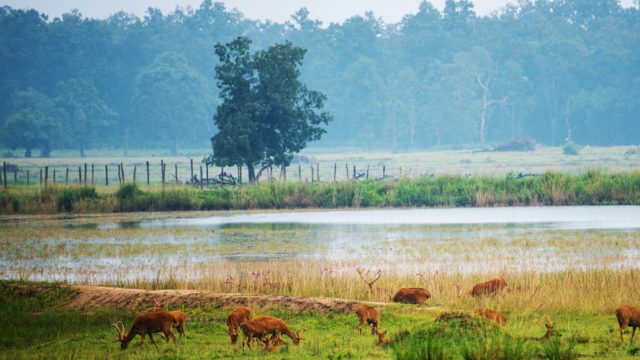 On this week-long tour, sail past marble cliffs, discover...