With its mountain views and colonial architecture, Pachmarhi has always been a typical ‘hill station holiday’. I’d never considered it as a wildlife getaway, but one afternoon in October, we drove right into the sprawling Satpura Tiger Reserve from Pachmarhi’s Panarpani gate. A 20km route through the core area of the forest, from Panarpani to Neemghan, had just reopened after 13 years, and I was lucky enough to be at the right place at the right time.

The Satpura Tiger Reserve is a vast expanse of forest, stretching across the hills and valleys of Madhya Pradesh and made up of three protected areas: Satpura National Park, the Bori Sanctuary, and the Pachmarhi Sanctuary. British explorer Captain James Forsyth first explored Pachmarhi and the surrounding region in the 1800s and documented the area’s incredible biodiversity in The Highlands of Central India: Notes on their Forests and Wild Tribes, Natural History, and Sports. 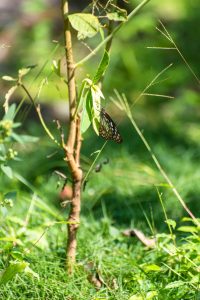 The park has a nursery and butterfly garden inside, which is operated by the Forest Department.

A drive through Panarpani offers a glimpse of this fascinating highland landscape. Great walls of sandstone rise sharply from the trail, the roots of ancient trees running down the sheer rock face like rivulets. The forest morphs from groves of mango trees to dense tracts of teak and sal, to patches of bamboo, jamun, amla, and crocodile bark trees. From elevated lookout points, endless mist-shrouded hills stretch as far as the eye can see. Deep gorges appear as if a giant cleaver has sliced through the mountains. Tigers, leopards, bison and a range of other wildlife dwell in these rocky landscapes.

Apart from the diverse vegetation and the promise of wildlife sightings, a safari in Pachmarhi offers a rare opportunity to step out of your vehicle and engage with the landscape. On this trail are a number of stops, including a butterfly garden, and rock art sites.

The Panarpani Nursery and Butterfly Garden, operated by the Forest Department, is a nursery of medicinal plants found in the Pachmarhi region. Wild tulsi, red chandan, wild tobacco, and several other ferns and plants grow in neat rows. There are natural cures here for stomach-aches, cuts and wounds, throat ailments – you name it, it grows here. Colourful clusters of butterflies hover over a small pond. The Painted Lady, Common Nawab, Blue Tiger – their names are as fascinating as their colours. 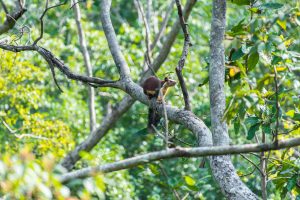 We hear a rustle in the trees just outside the nursery. ‘Giant squirrels,’ says our guide Kishore with certainty. I am dubious about spotting them. I’ve wanted a glimpse of the creatures for months now, but in my experience, they are easily heard and rarely seen in dense jungles like this one.

As our jeep rounds a bend, I spot a large nest atop bare branches, and close by, a dangling bushy ebony tail. Slowly, the creature reveals itself – a pointy white face, beady eyes, and russet-hued body. It is indeed a handsome Indian Giant Squirrel, also known as a Malabar Giant Squirrel. I’m thrilled at the close-up sighting, and cannot take my eyes off the little fellow who pauses his constant snacking to curiously survey us. This is the largest species of tree squirrel with a tail longer than its body, which it uses for balance as it leaps through the branches at an incredible speed.

We drive past another unexpected sight – a vast coffee plantation. Spread across the hills in the shade of trees, coffee was once planted here, most likely by the British. The plant took to the weather, and now grows unassisted in the forest, part of a unique ecosystem. 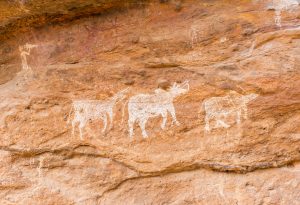 Rock painting at the Badkachar Rock Shelter shows a group of animals (in white) and a hunting scene on top.

Ancient rock art sites lie concealed in this wilderness, and we hop off the jeep to visit two of them. The first, called Baba Garden, is accessed by a short trek, where more Giant Squirrels prance overhead. At the rock-art site is a hunting scene on the rocky canvas with figures of prehistoric men wielding spears. At the Badkachar Rock Shelter, we trek uphill to see images of various animals high up on the rocks. The white and red pigments used were made from natural substances like limestone and iron oxide. Estimates suggest that the ancient art in the Pachmarhi region dates as far back as AD 500.

The grasslands along the route are sites of relocated villages. Nature has reclaimed these former settlements and now chital and other deer species graze peacefully here. Along the way we spot a serpent eagle and a tiny mouse deer, an agile monitor lizard and two stoic wild boar.

On the return, as the sun lowers, we cross paths with a massive bison, or gaur,  with huge curling horns. The bison watches us for a while, before turning and bolting into the foliage at an alarming speed that belies his immense girth. James Forsyth spotted these very creatures on his explorations of Pachmarhi and named the town’s Bison Lodge Museum after the gaur. I’m glad to see they roam wild and free after all these years. 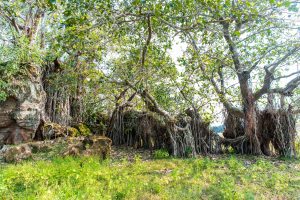