In the first week of October, Bandhavgarh’s bamboo and sal forest is unrecognizable to even those who know it best. Right after the monsoon, I’m on the first morning game drive of the season with Anshuman Shah and Vijaybhan Singh—naturalists at Samode Safari Lodge. They greet the forest like an old friend, their conversation revealing their familiarity with these wooded tracts. We drive past a thriving watering hole, full of jumping frogs and lazy cormorants, bone-dry just a few months ago. At a slender-trunked sal tree, we stop to admire three neat, equidistant oval hollows. “Woodpeckers are the architects of the wild,” says Anshuman. On their last foray into the park, he recalls there were only two hollows on this tree.

I’d felt an initial pang of disappointment at not getting tickets to any of the park’s core zones. As home to one of the world’s highest concentrations of tigers, the 1536-sq-km Bandhavgarh National Park is among the most popular destinations for visitors hoping to catch a glimpse of the striped cat. Safari tickets are booked out much in advance, especially for popular zones like Tala.

A wild boar at Bandhavgarh National Park is trailed by her cubs.
Abhinav Kakkar

Red-wattled lapwing near a stream in the park.
Abhinav Kakkar

As we admire nature’s artistry in the Panchpadi buffer zone, my disappointment fades quickly. Humungous spider webs stretch from the forest floor into the canopy, dazzling in the mild sunlight. Red-wattled lapwings stick their heads out of the tall grass to survey our passing jeep. Two little wild boar piglets chase after their busy mother, her tail working overtime to swat away insects. The naturalists keep up a constant dialogue, sharing tales of animal coexistence, and interesting facts about the forest.

We hear the babblers before we spot them in the branches. Alongside them, orioles and a drongo flit about. I’m intrigued to learn that this is a mixed hunting party—different species of birds foraging for food together.

The morning mist rises, and the dew rolls off the leaves. Every corner of the forest begins to stir. We spot a long white tail-feather overhead. The stunning Asian paradise flycatcher, with white plumes and a blue-black head, is Madhya Pradesh’s state bird.

The morning is flush with rare bird sightings. Within the hour, we spot the grey Indian hornbill with its magnificent curved casque, a speckled painted spurfowl, scaly-breasted munias nesting in the grass, and the tiny green bee-eater. From afar, I catch sight of a massive, nearly four-foot tall bird on the ground. Wings spread, it takes flight within seconds, but not before I catch sight of its bald head. “That’s the lesser adjutant stork; a scavenger bird,” Anshuman says.

The lush jungle thrives with more than 250 bird species and a rich variety of fauna. Bandhavgarh was once the hunting ground of the Maharajas of Rewa. There is no doubt that the mighty striped cat is the flagship species here, but a healthy availability of prey is essential to its survival.

At the Jamuntara talab, we see a herd of chital stop for a drink of water. A stately sambar with magnificent antlers stops feeding to give us the once over. Bandhavgarh is also home to sloth bears, dhole, and gaur. The gaur or Indian bison is among the top ten largest land animals, weighing up to an impressive 1,000 kgs. From the late ‘90s, gaur were extinct in Bandhavgarh. In 2011, the bison were reintroduced in the park in a formidable relocation exercise from Kanha National Park. Today, gaur are a common sight on game drives through Bandhavgarh.

Commonly known as the ghost tree, for its luminous white colour, the trunk of the kulu tree peels off in papery layers, and has a distinctive glow.
Abhinav Kakkar

The business of tiger-spotting is stressful for naturalists, park guides, and most of all, the forest. “There is no such thing as a 100% guaranteed tiger sighting,” Anshuman says. To mitigate some of this pressure, the naturalists at Samode try to pique visitor’s interest in the forest’s smaller species. Anshuman points to depressions in the ground, made by ant lions. “The insect is one of Bandhavgarh’s “Small Five,” he says. The others are the rhino beetle, tree shrew, flying squirrel, and dung beetle.

By now, it is clear to me that the jungle’s residents do not differentiate between core and buffer zones. In this contiguous forest, the entire landscape thrives with life.

GPS coordinates are marked at certain spots in the park, for tracking purposes and ease in communication.
Abhinav Kakkar

As if on cue, a jungle fowl’s surprised squawk pierces the air. “Alarm call!” Anshuman says. In the forest, these two little words are the surest sign that drama is about to unfold. The jungle fowl spooks easily, and will call out for everything from a tiger to an eagle. We wait few seconds, until a single langur’s grunt breaks through the canopy. The jungle’s theatre plays out in a matter of moments. Anshuman spots fresh pugmarks on the safari trail. The langurs begin to traverse the canopy, all the while signalling the presence of a predator. “Langurs are the eyes of the forest,” he says, as we attempt to follow the primates from the safari trail. A herd of chital emerge in a rush from the thicket, crossing our path. Langurs and chital share a symbiotic relationship, jointly signalling the presence of predators from the canopy and the forest floor.

The trail of pugmarks disappears into the undergrowth. The big cat is most definitely metres from us, but after several months of the monsoon, the thick bramble of lantana and the impenetrable forest provide adequate cover. We have no tiger sighting that morning.

Grey langurs, also known as Hanuman langurs, are quite a common sight in the park.
Abhinav Kakkar

When the calls fade and all is still again, surprisingly, I feel no disappointment. Instead, I’m thrilled beyond words at the close encounter, and intrigued by how the naturalists and park guides interpret the clues of the forest. The magnificent buffer zone is exclusive to us that morning; we cross no other jeeps, there is no relay of information. And yet, we were metres from an apex predator. Never before had I understood the workings of the forest in such intimate detail.

A sculpture of a tiger, under a tree near Dhamokhar post.
Abhinav Kakkar

Here, in one of the last great refuges of the striped cat, I understand that the forest marches to its own rhythm. Time functions differently, as the pace of activity either slows to a crawl or quickens to a flash. Every creature, from the teeniest bug to the mightiest bison, has its own amazing story of survival. It is truly impossible to return from the forest unaffected.

Getting there: The airport nearest to Bandhavgarh is at Jabalpur (225 km/4 hrs). The closest railhead is at Umaria (35 km/40 minutes).

Although most visitors choose to book safaris through their lodge it is possible to book independently.

Entry: Permits per jeep cost ₹1,550 for the core zones and ₹1,250 for the buffer zones. Each jeep seats six. Vehicle and guide charges are extra and payable at the gate, shared by all occupants of the jeep. Carry government-approved photo ID. 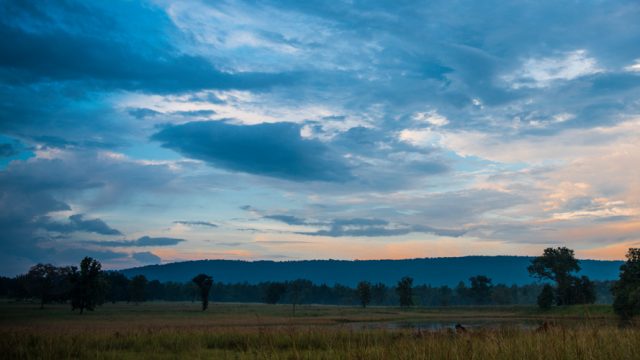 The Lucid Landscapes of Madhya Pradesh

With more than a quarter of its land under forest cover and... 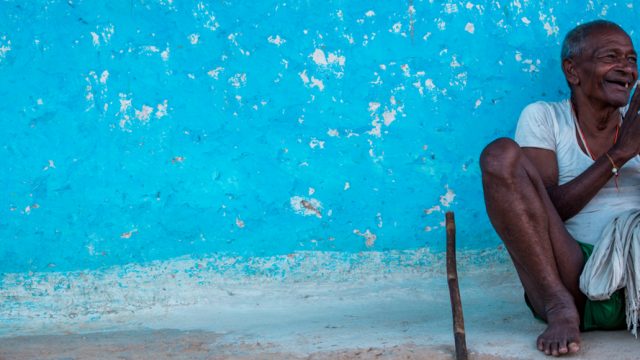 A peek into the rich culture and traditions of the... 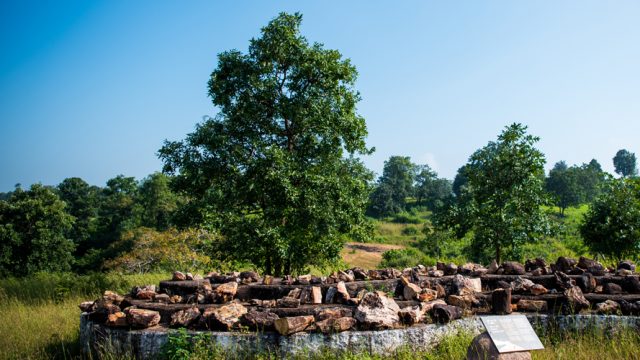 A short road trip to discover ancient fossils, learn about...