Orchha is like a fossil. Cut it laterally and it reveals a slice of history that should not have been there… something that should have crumbled or been stamped down by newer eras, but somehow, still stands due to its extraordinary perseverance.

As a settlement, its history is not very old – only going as far back as four centuries. It was so overrun with impregnable, thick forests that when it was discovered, it was called ‘Orchha’ meaning ‘hidden’. It was only in the earlier part of the 16th century that the Bundela Rajput chief Rudra Pratap Singh founded his capital here, on the western stretch on the banks of the river Vetravati.

The monuments, a blend of the Rajput and Muslim architectural styles, are scattered everywhere in this town, which explains why it is on UNESCO’s tentative list of world heritage sites. Marking the limits on the city in every direction are many fortified gates or darwazas: on the Jhansi Road, the Bhanderi Darwaza was equipped with guard rooms and weaponry, and there are the Chanderi Darwaza, Gundrei Darwaza, Hathi Darwaza as well as a Pramukh Dwar, the main portal into the city from the north. 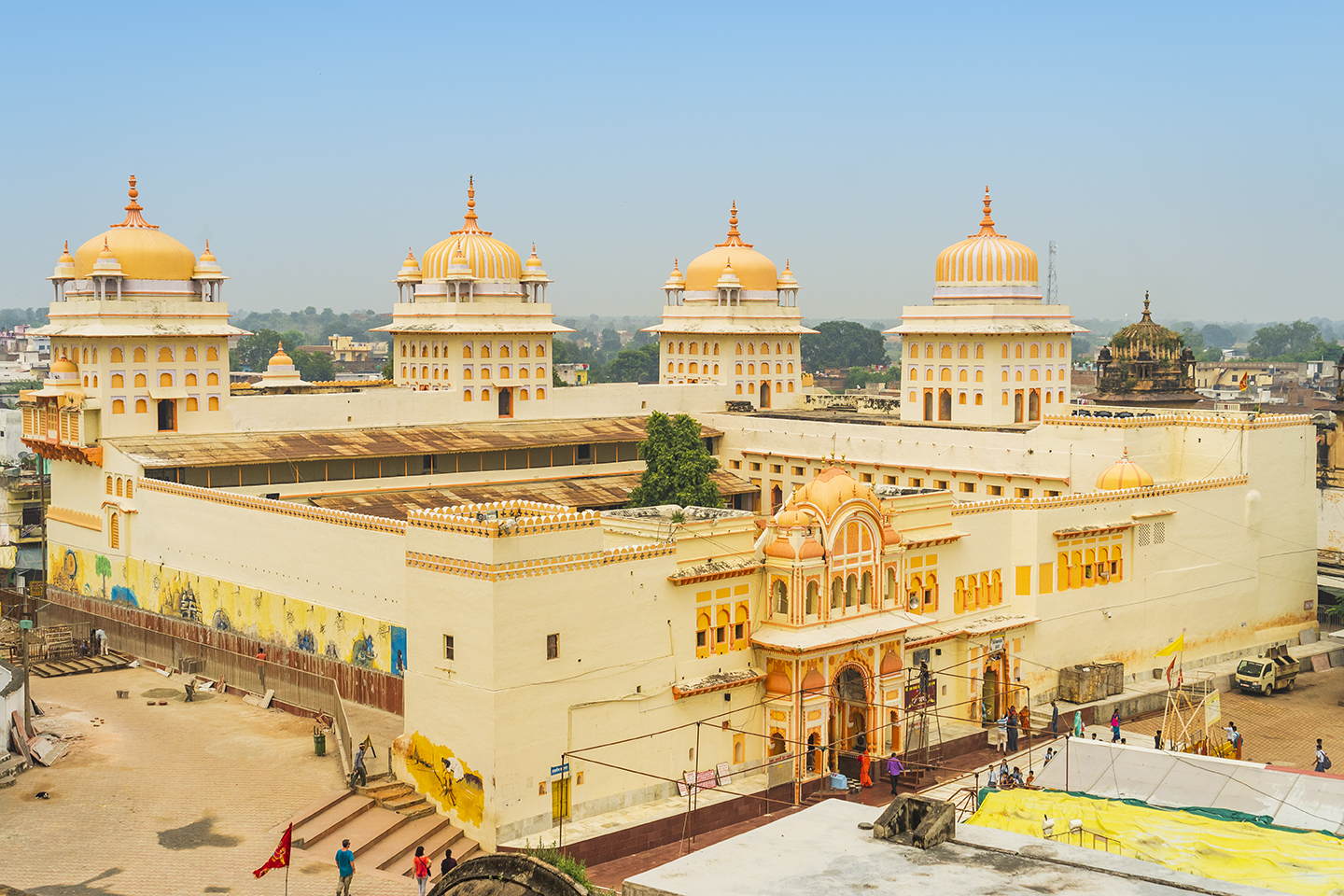 Even a list of Orchha’s main structures – Raja Mahal, Sheesh Mahal, Jahangir Mahal, Rai Parveen’s Mahal, the royal chhatris, Chaturbhuj Mandir, Raja Ram Mandir, Lakshmi Narayan Mandir – is difficult to rattle off in one breath. And that is not even describing the host of smaller temples and monuments that dot the town. Ideally, Orchha should be experienced in two or three days. After you have done the touristy thing by rushing from one monument to another, raising your camera at every cornice and jaali-window, you settle in and begin to experience the erstwhile Bundela capital in a different way.

While the fort is no doubt fascinating, what draws the eye is the towering Chaturbhuj Temple. Built on a high plinth with spires of varying heights, this is the keeper of Orchha’s soul. It was built to house Lord Rama but the shrine was never used for the purpose it was made for. The legend goes that Rama, before agreeing to accompany Rani Ganesh Kunwari to Orchha, laid down the condition that once he was set down, he would not move again. However, the grand temple meant for him was still being built, and so Rama was installed temporarily (or so they thought) in Rani Mahal, the queen’s quarters. However, the deity stayed put, taking over the palace for himself, and leaving the adjacent temple vacant. 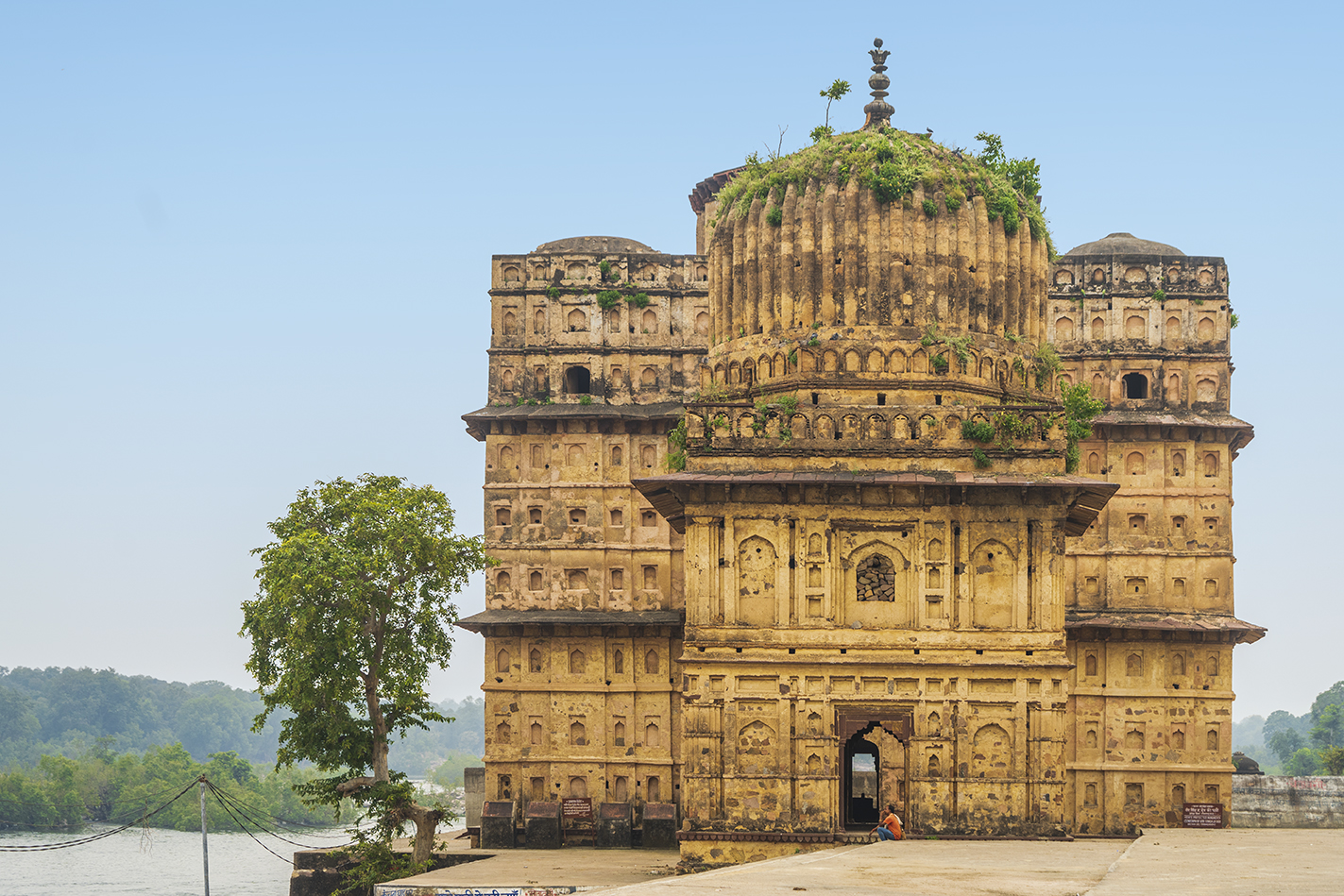 Situated on the banks of Betwa river, the cenotaph of Raja Vir Singh Deo is the most elaborate and remarkable

There is no doubt that Ram Raja Mandir is the moral centre of the city. Devotees come from far and wide, the market springs up around the temple, there are restaurants, tourist lodges, mishthan bhandaars, stalls with curios and, if you needed more evidence of liveliness, there is chaat too. Ram Raja, you will slowly realise, is the real monarch of Orchha; this is the only temple in India where Rama is worshipped as a king, and the only place where the police – designated to guard the temple – give a daily gun salute to the deity.

Adjacent to the temple you will find two pillars which locals will tell you that are Saawan Badho, an ingenious Persian system of cooling. The two pillars are perforated with apertures to catch the wind, while they are connected underneath to a water reservoir, keeping the palace cool. Phool Bagh, or the surrounding formal gardens and pavilion, were built as a memorial to Dinman Hardaul, Prince of Orchha. Hardaul was falsely accused of having illicit relations with his brother’s wife, and in order to protect her reputation as well as his own honour, he willingly consumed poison and died at the young age of 24.

Rai Parveen Mahal is dedicated to the inimitable poetess and musician Rai Parveen. It is said Raja Indrajit was so fascinated by her that he built a three-storeyed palace for her. Also known as the Nightingale of Orchha, Rai Parveen’s reputation reached the Mughal court of Emperor Akbar, who summoned her to Delhi. A light and sound show organised in the fort narrates this tale of romance.

To the south of the Chaturbhuj Temple, near Kanchan Ghat on the River Betwa, you come to a spectacular sight: the royal chhatris, or cenotaphs, of the Bundela royals. There are 15 of these large, impressive monuments built in the Panchaytan style. These are memorials to departed rulers and include those of Madhukar Shah, Jaswant Singh, Udait Singh, Pahar Singh and many others. The most distinct of these belong to Bir Singh Deo, the most illustrious and influential of this line.

As dusk falls, the river glints golden in the setting sun. The Indian Long-Billed Vultures that roost in these edifices fly back to their nests. Night falls and Orchha still stands as a testament to the bygone era. 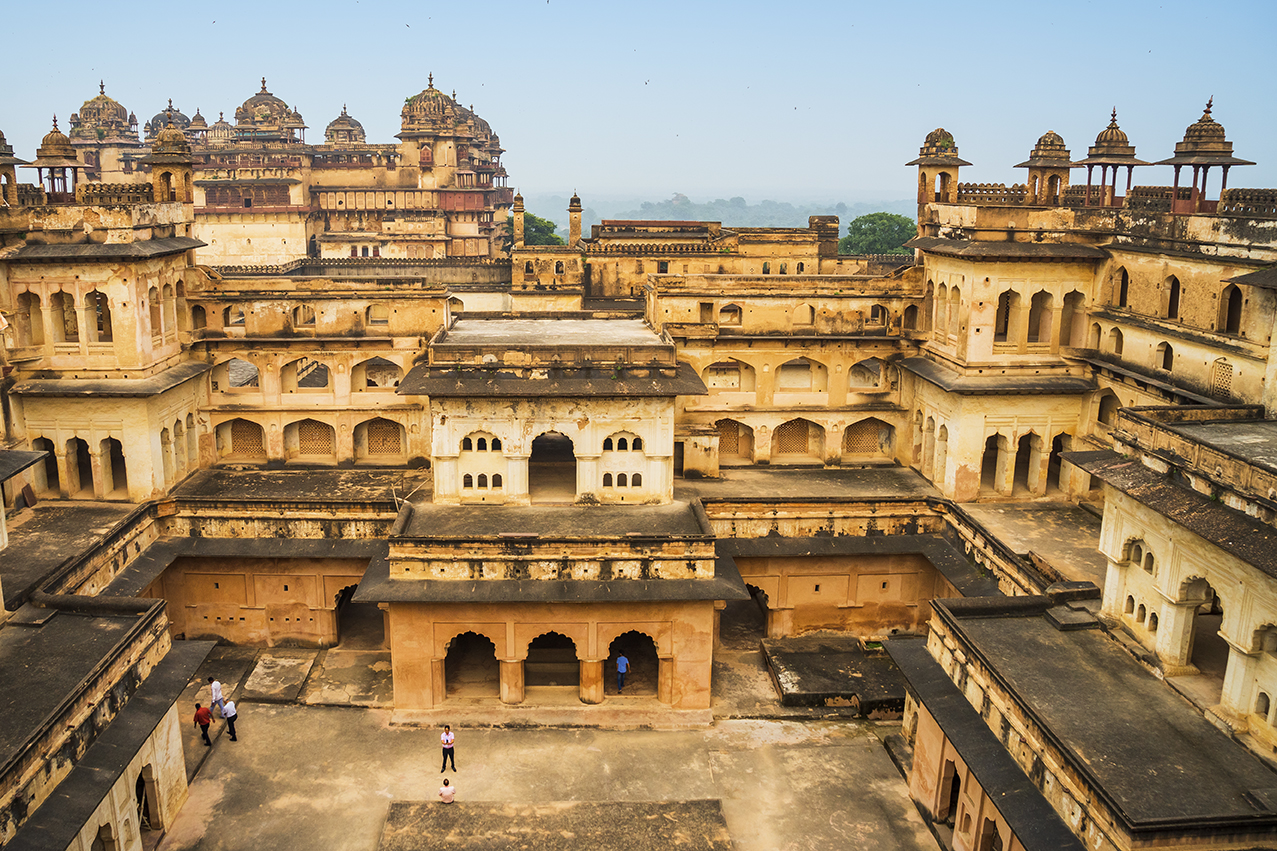 The ticket also covers the royal chhatris, the Chaturbhuj Temple and Lakshmi Narayan Temple, and is valid only on the day of purchase.

For these smaller monuments, garner the services of an official guide, who can be hired from the ticket office at the entrance of the fort complex. Rates will depend on the number of persons in the group, monuments you wish to see as well as the time taken for your customised tour. A small pamphlet about the heritage walk (INR10) is available at the office as well.

The area around Ram Raja Mandir is dotted with several eateries that offer both snacks and meals. There are many eateries that cater to the western tourist as well. Jharokha at Betwa Retreat (Betwa Retreat, Orchha Bypass Road, Orchha; Tel: 07680-252618) has a reliable range of dishes, both Indian and Continental. In the lane behind Ram Raja Mandir, Rimjhim Hotel (Bypass Road, Orchha; 09755492116) offers excellent vegetarian Indian fare.

There are many stalls around Ram Raja Temple selling colourful skirts and fusion wear, bags, shoes and much more. In the vicinity of Chaturbhuj Temple, look out for some fabulous bell metal ware and handicrafts that the region is known for. Some of these pieces are sand-cast, making them one-of-a-kind. You will also find many wooden blocks with engraved designs like simple flowers and traditional motifs used for block printing. Just pick up any that you like, and make your own dupattas and stoles! The blocks cost INR35 and upwards. Bundeli artists, in the nearby cluster, carve out beautiful images by using a sharp device on a spread of red clay or handmade paper.

Carry a torch when you go to explore these monuments as you will be going through many dark, narrow staircases and tunnels.