On the way back from Sanchi to Bhopal, an unassuming signboard reads ‘Satdhara Tourist Place – 7km’. On a whim, we veer off the highway and drive through fields and forest to arrive on a forested hilltop just before sundown. The location is stunning with the placid and deep green Halali River, flowing far below. The land rises sharply on the other bank, covered in forest as far as the eye can see. A fireball of the setting sun paints the sky orange. In this impossibly scenic location, lies a cluster of ancient Buddhist relics estimated to date back to the 2nd century BC or even earlier.

Satdhara is a relatively lesser-known Buddhist site in Madhya Pradesh – a sharp contrast to the nearby UNESCO World Heritage Site of Sanchi. Just an hour earlier, I shared space with tourist hordes as we looked at Sanchi’s Great Stupa and other Buddhist structures, well-preserved and marked with signboards. Here, at Satdhara, the tourists are conspicuous in their absence, the structures lie in varying states of preservation by the Archaeological Survey of India, and signboards too are noticeably missing. 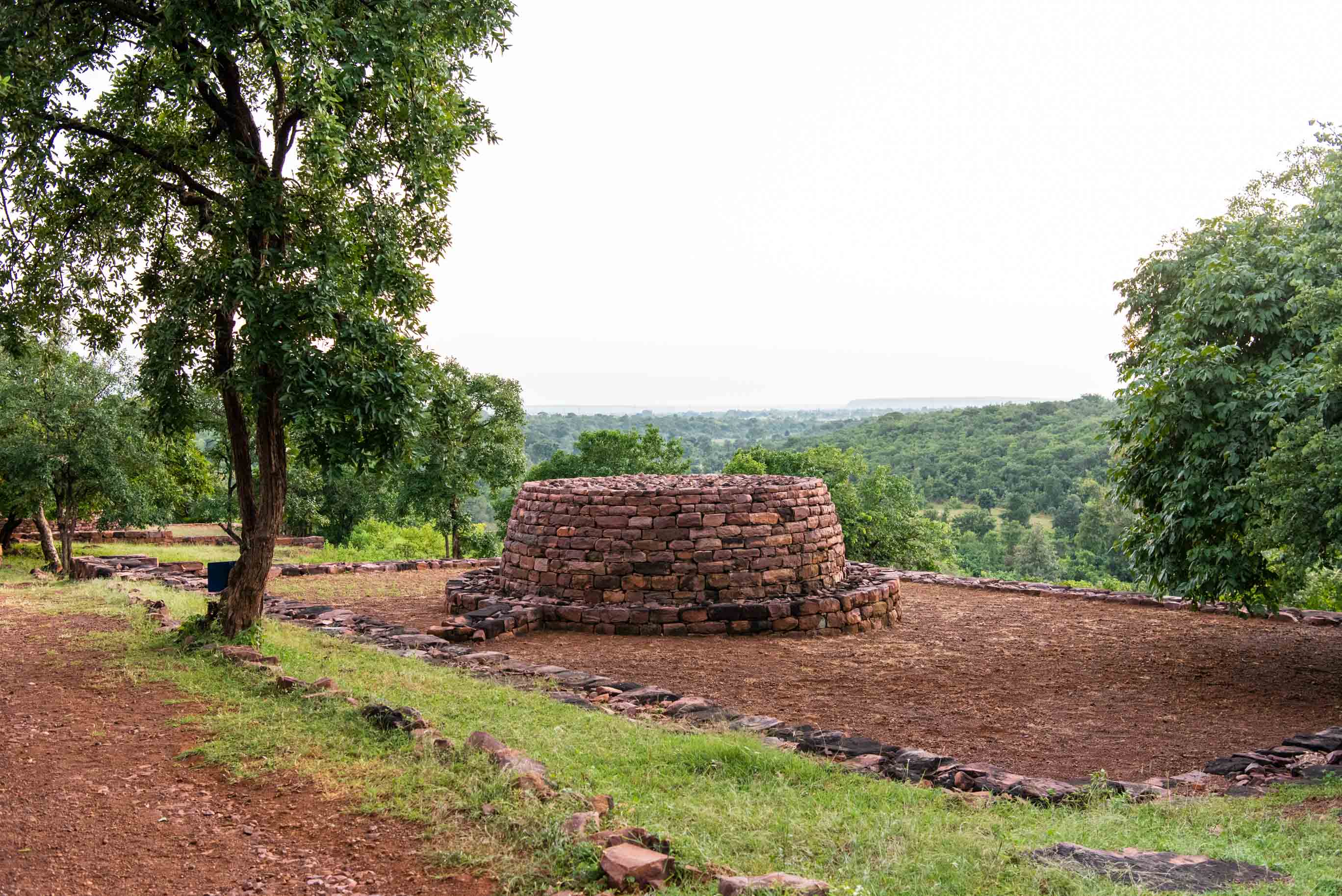 The Satdhara site was discovered by Alexander Cunningham in 1854 and is now being excavated under a UNESCO grant.

I walk the narrow trail that runs along the hilltop, lined by teak forest on the one side, and by brick structures on the other. Numbered from one to eight, there are small stupas and remnants of monasteries. A series of dilapidated stone steps lead to the roof of a monastery, where nature has taken its course and the grass now springs wild from within the stone. From here, I have a sweeping view of the river, valley, and Satdhara’s pièce de résistance – Stupa No. 1. A large and rather magnificently preserved dome in three tiers rises from a patch of green, surrounded only by forest and centuries-old relics.

In 1854, Alexander Cunningham, a British army officer and an archaeologist, excavated the site and reported that this stupa was similar in scale to its famous counterpart in Sanchi, measuring more than 30 metres across and 12 metres high. I climb the steps midway up the stupa and circumambulate in a clockwise direction, as is customary in the Buddhist culture. A glorious full moon rises behind the great brick dome, even as the sun sets behind me over the Halali. In this wild, ancient place, with only crickets and birds for company, it is easy to see why monks would have settled in this slice of serenity.

Getting there: Satdhara is 13km/30 minutes west of Sanchi