For a glimpse of Sanchi’s Great Stupa, open your wallet and fish out the orange-tinged Rs 200 note. The motif on the reverse is of the ancient Buddhist structure, built by Emperor Ashoka in the 3rd century BC. Along with this well-preserved stupa, a cluster of Buddhist monuments atop a hill near Bhopal in Madhya Pradesh, makes up the UNESCO World Heritage Site of Sanchi. Among the most important Buddhist sites in the world, Sanchi’s monuments are a testament to the thriving Buddhist colony that existed here till 12 century AD.

When Emperor Ashoka converted to Buddhism, he commissioned a Buddhist enclave on the Sanchi Hill. Over the centuries, stupas, monasteries, temples, and columns defined the area as a centre of Buddhist art, culture, and architecture. Today, these are preserved in a well-maintained complex visited by thousands of tourists and devotees.

At the base of Sanchi Hill, the Sanchi Archaeological Museum holds excavated finds from Sanchi and around, dating back to the Mauryan and Gupta periods. Occupying pride of place is a massive Lion Capital of Ashoka, which dates back to the 3rd century BC, but the chunar sandstone still gleams. 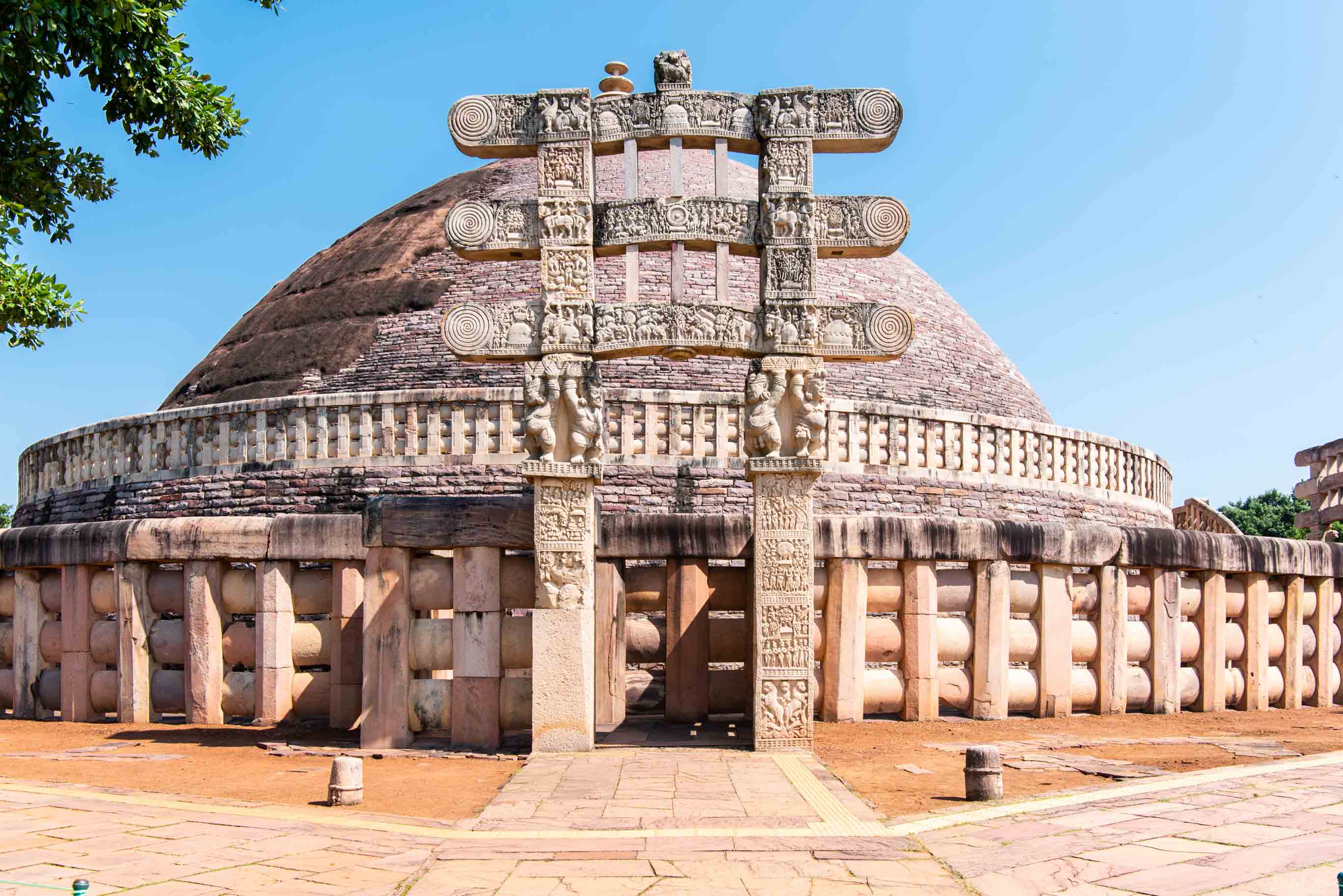 Exploring the green grounds on the hilltop, I walk amidst temple ruins from the Gupta period, smaller stupas, and the remnants of a monastery complex. The largest crowds congregate at Stupa 1 or the Great Stupa, and it is easy to see why. Flanked by four ornate gateways, or toranas, and with a three-tiered umbrella atop the dome, the grand structure is definitely the centrepiece of the complex. The dome symbolizes heaven enclosing the earth, which is surmounted by a squared railing (harmika) representing the world mountain. A central pillar (yashti) symbolizes the cosmic axis and supports a triple umbrella structure (chattra), which is held to represent the Buddha, the doctrine, and the community. A circular terrace (medhi), enclosed by a railing, surrounds the dome, where devotees circumambulate in a clockwise direction. The entire structure is enclosed by a low wall (vedika), which is punctuated at the four cardinal points by the gateways.  Meanwhile, each torana is made up of two squared posts topped by capitals of sculptured animals or dwarfs, surmounted by three architraves. Further additions to the stupa were done subsequently in the Sunga and Satavahana periods (2nd century BC onwards), when the gateways were added in each direction.

Climbing to the circumambulatory path built midway up the Stupa, I have a close-up view of each gateway’s intricate motifs: elephants, the Bodhi tree, and lotus flowers feature prominently. The carvings depict scenes from Gautama Buddha’s life and Jataka legends. Most visitors choose to circumambulate at the base of the stupa, but the upper level is far more serene, providing almost a bird’s eye view of the forested valleys, stone relics, and the quiet monastic enclave that Emperor Ashoka once envisioned.

The excavation and conservation of Sanchi was a laborious process. Much of the efforts are credited to Sir John Marshall, DG of the Archaeological Survey of India, who carried out conservation efforts from 1912-1919. Browse the photo gallery at the Sanchi Museum to learn more about the fascinating work he did. John Marshall’s preserved home is on the grounds of the museum.

Getting there: Sanchi is 50km/80 minutes from Bhopal by road

Museum: 9am to 5pm; Closed on Fridays

Entry Fee: INR40 per person for the museum and stupas; INR20 per car

A small souvenir shop near the View Point sells replicas of the Lion Capital carved from walnut wood and small Buddha sculptures.