The history of Bundelkhand is fascinating. Kingdoms, principalities and fiefdoms changed and morphed from period to period, sometimes being held for dynasties, at others changing hands with each ruler. Here you find struggles for power and impressive bursts of empire-building but equally, the pages of history are filled with personal stories of the royals who occupied centre-stage at one time or the other. Here, we are charting out a few trails along the repositories of history…

Day 1: Gwalior
The Gwalior Fort complex is famous for holding many monuments including palaces, temples and baolis (stepwells) within its fold. Each palace here – Man Mandir, Jahangir Mahal, Karan Mahal and Shah Jahan Mahal, the Assi Khambha Baoli, and the fascinating Gujari Mahal – all of them have their own tales to tell. But, by far the most romantic episode has to be the story of the Rajput ruler Man Singh Tomar, who ruled Gwalior for over 30 years, and the tribal Gujjar beauty, whom he married and named Mriganayani. His ninth queen, she was a feisty lady, and he built the beautiful Gujari Mahal for her. Raja Man Singh was a great patron of music and Mriganayani is said to have learnt music from the celebrated court musician Haridas. The Raga Gujari Todi was named in her honour. Gujari Mahal, at the eastern gate of the fort, is a particularly beautiful palace.

Jai Vilas Mahal, a stunning 19 th century palace, offers a glimpse into the world of the Scindias, the Maratha dynasty that ruled Gwalior. It is a museum that houses various artefacts of the Scindia royals, with tableaux of the various rooms once occupied by the royal family. It is interesting to see the level of luxury once enjoyed by the rich and powerful. 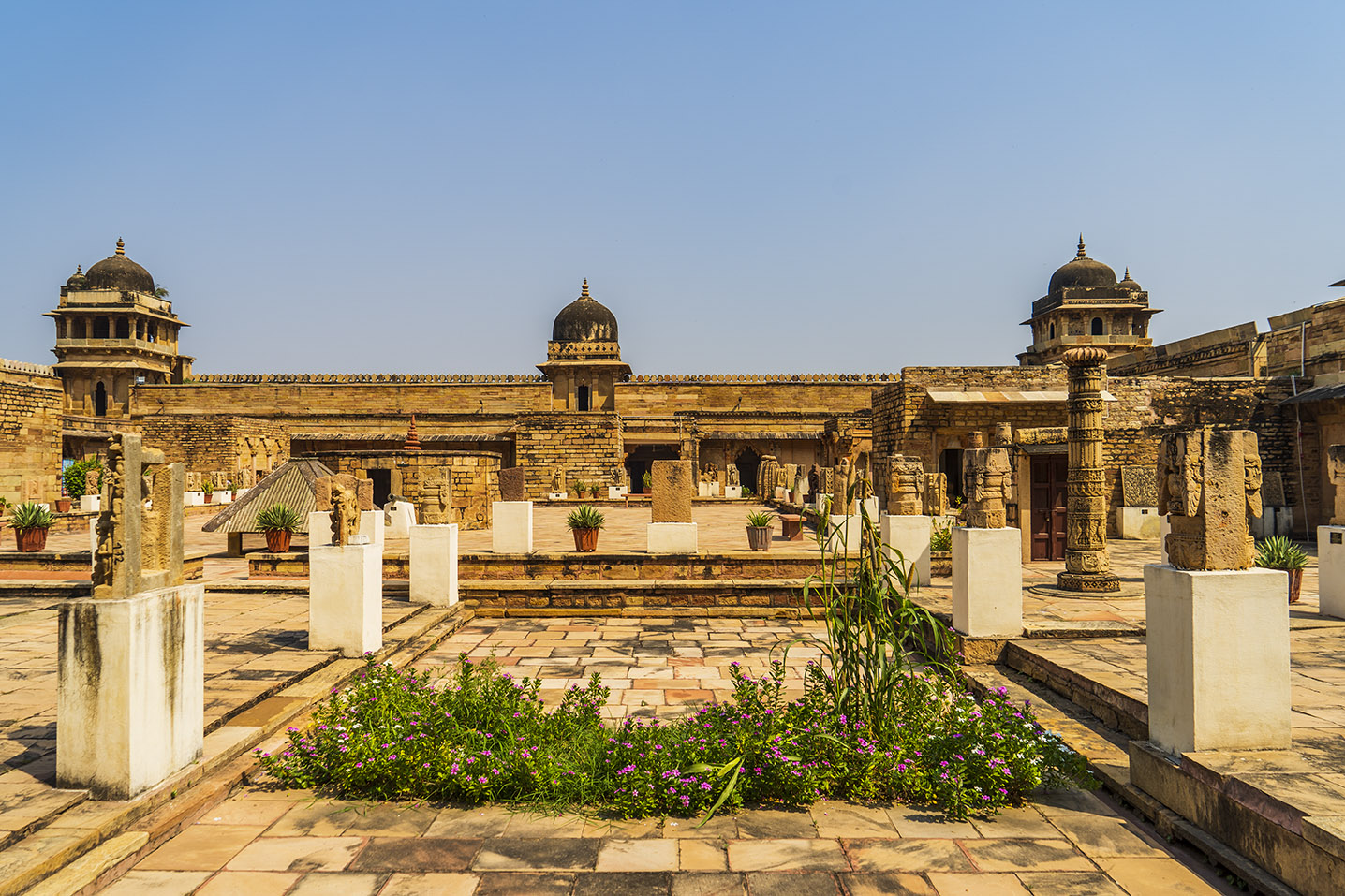 Inaugurated 1922, the Gujari Mahal Archeological Museum
housed in a palace, which was built by king Man Singh for his beloved queen Mrignayani

Day 2: Orchha
Next day morning, make your way to Orchha. However, spend a better part of your day in the wonderful town of Datia. Referred to in the Mahabharata as Daityavakra, this ancient city had many temples of antiquity and was a prominent spiritual centre: for this it was nicknamed ‘Laghu Vrindavan’ or ‘Small Vrindavan’.
The most imposing structure here is the Datia Palace, one of the finest specimens of Bundela architecture. It was built in 1620 by Bir Singh Deo in honour of his friend and ally Jahangir. The friendship that cropped up between the Bundela and the Mughal prince makes for a riveting tale. The building is stunning in its geometry as also in the intricacy of design and embellishments. A blend of Mughal and Rajput influences, the seven storeys altogether house 440 rooms and cost the king a sum of 23 lakh rupees. The emperor and his troops, it is said, only spent one night in this palace before proceeding to Orchha. 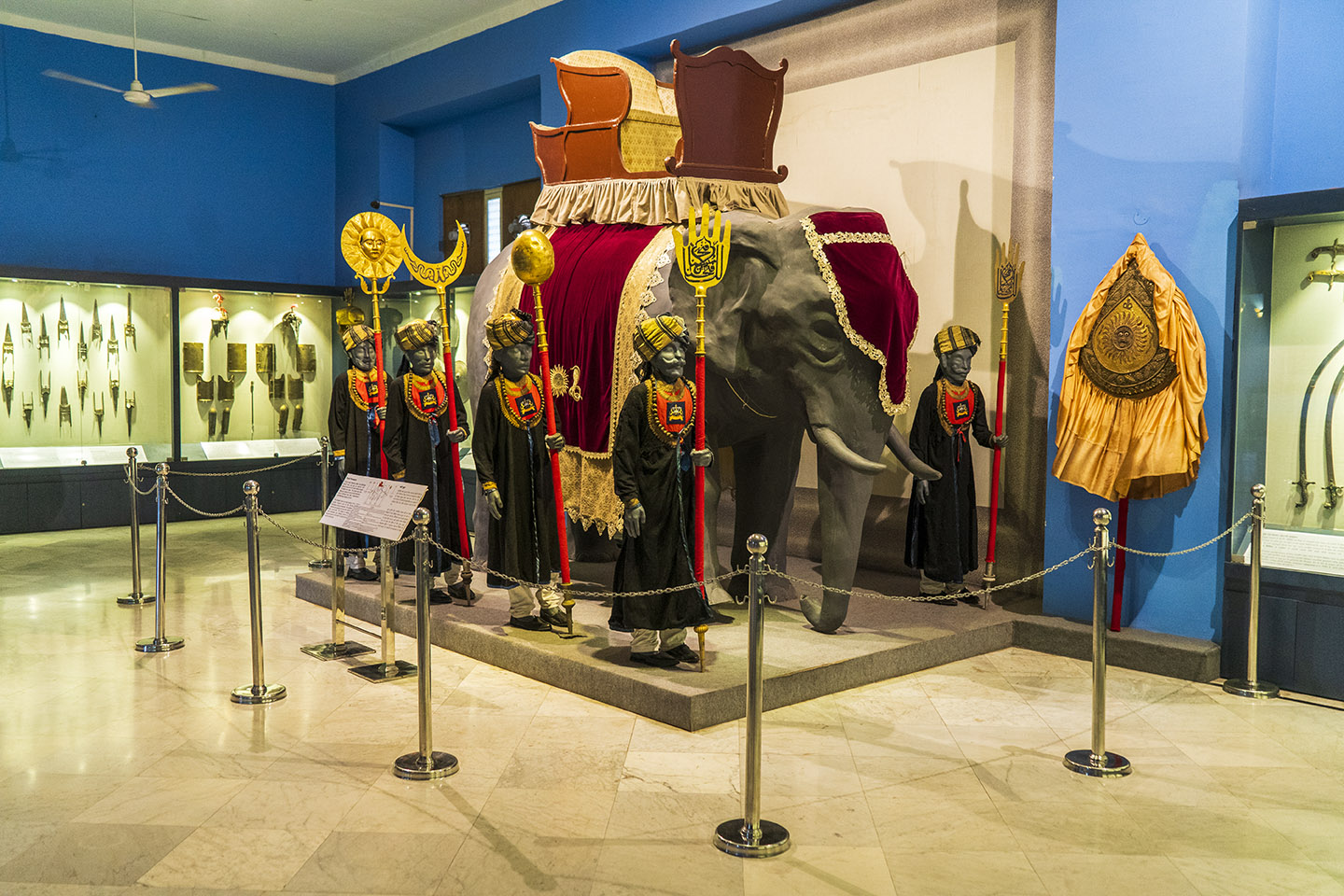 Model of the royal procession at the Jai Vilas Mahal, Gwalior

Day 3: Orchha
In Orchha, every monument has a story to tell. You carry on in Emperor Jahangir’s footsteps to the fort-complex to the even grander palace that Bir Singh Deo built to receive his ally. Like Datia Palace, Jahangir Mahal also hosted the emperor and his retinue only for a brief while but it is no less impressive for that. There are 236 chambers laid around a vast central courtyard with more than half of them being underground. The adjacent Raja Mahal was built by Bir Singh’s father Madhukar Shah – the painted walls and ceilings, the stunning darbars, the labyrinths of chambers, arches and latticed windows are gorgeous. Madhukar Shah and his wife Ganesh Kunwari are also the principal characters of the famous legend involving Ram Raja who occupied the Queen’s Palace, leaving the magnificent Chaturbhuj Temple standing empty. The Bundela Chhatris by the riverside also
collectively speak of the might and the influence of this once-powerful royal family. 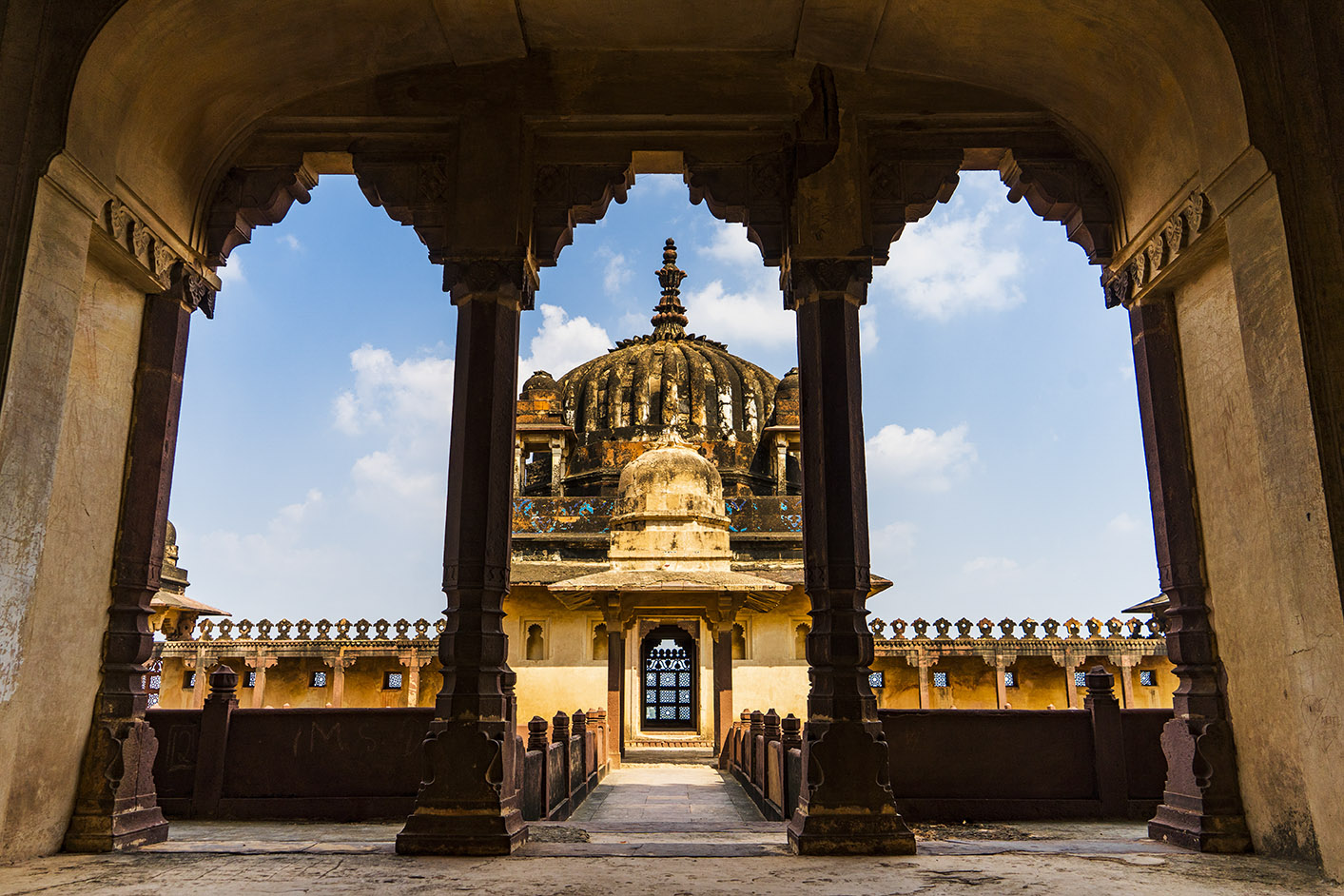 Day 4: Alipura
Move on next to the small former princely state of Alipura. Here you have the privilege of staying at the very palace that you are rummaging. The Alipura Palace was converted into a heritage hotel in 2008 by its owner, Rao Bahadur Raja Manvendra Singh Judeo, the Raja Saheb of Alipura. Although some sections are over 300 years old, the structure itself is about 150 years old.
The family hails from the Parihar clan of Agnikula Rajputs, and the state was founded in 1757 by Rao Achal Singh. Titled Rao, the Alipura rulers were granted the additional title of Bahadur by the British. The present-day Raja Saheb of Alipura, Rao Bahadur Raja Manvendra Singh Judeo is an active politician and lives in his own quarters in the palace.
The whole palace, and even the Dhanushdhari Temple opposite are redolent with echoes of the past. Look around the restaurant and the billiards room which display several photographs and memorabilia of the family. 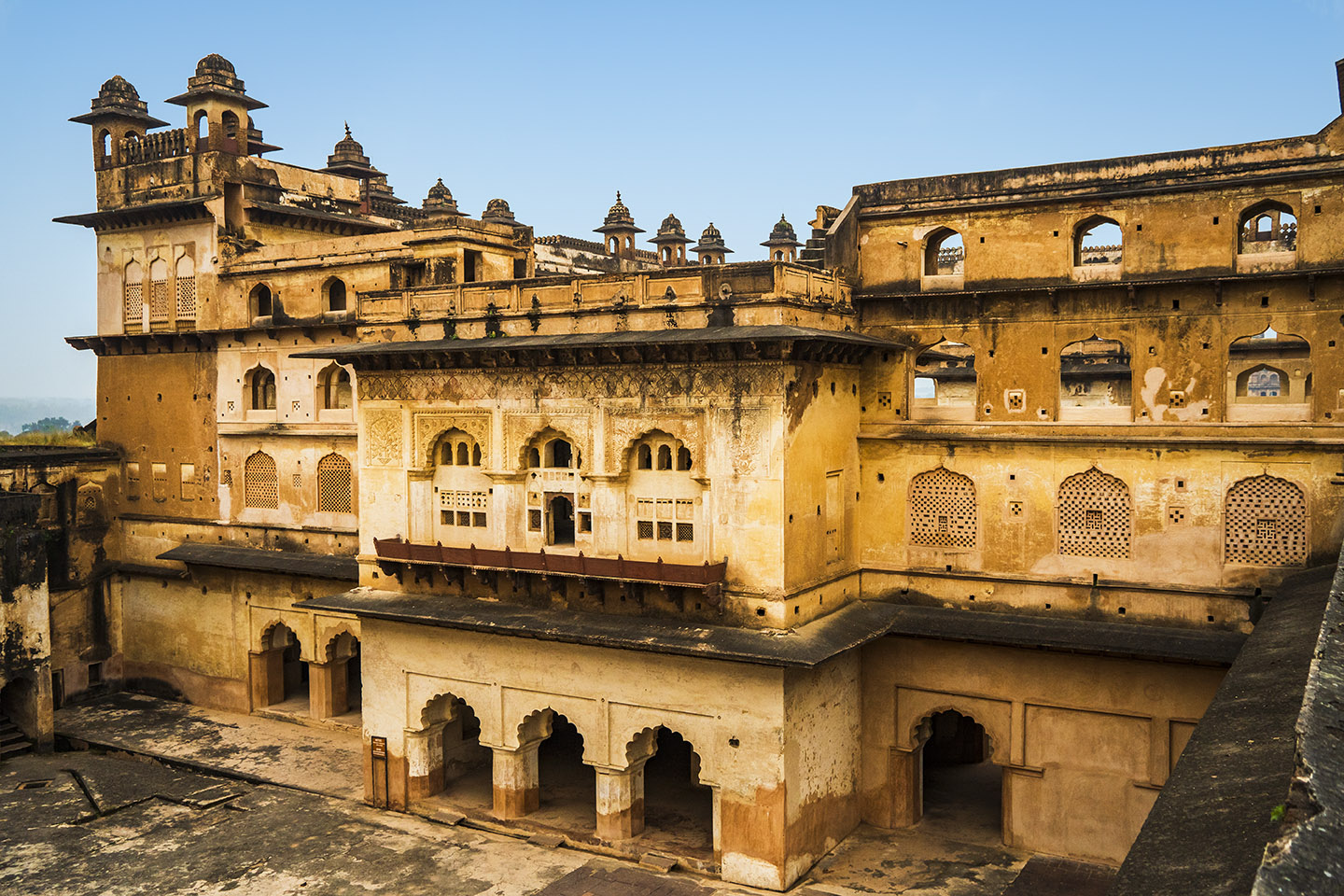 Built in 16th century, the Raja Mahal in Orchha has intricate
murals of social and religious themes of gods, mythical animals, and people

Day 5: Alipura/Dhubela
With Alipura still as your base, take a day trip to Dhubela, 26km away. One name that you will come across repeatedly in Bundelkhand is of Maharaj Chhatrasal. A great warrior who took on the Mughal emperor Aurangzeb, this much-loved king is often referred to as Bundelkhand Kesri (‘lion’) Veer Chhatrasal as he carved out a large dominion for himself in central India. Another point of interest is that he is the father of Mastani (made famous by the 2015 movie Bajirao Mastani) from his Persian mistress Ruhaani Bai. When he was well into his seventies, Maharaja Chhatrasal sought the help of the brave Maratha Peshwa Baji Rao I to tackle the Mughals in 1730, and gave his beautiful daughter Mastani as a bride to Baji Rao. The Maharaja Chhatrasal Palace is now a museum that offers great detail and depth to the history. While here, do look out for the central sculpture of the king and portrait of Mastani.
Next to the palace-museum is Mastani Mahal that he built for his beautiful daughter. Also in the vicinity is the palace of Hridaya Shah, Raja Chhatrasal’s son. A little further, by the Dhubela Lake, is the cenotaph of the king’s first wife, Rani Kamlapati. 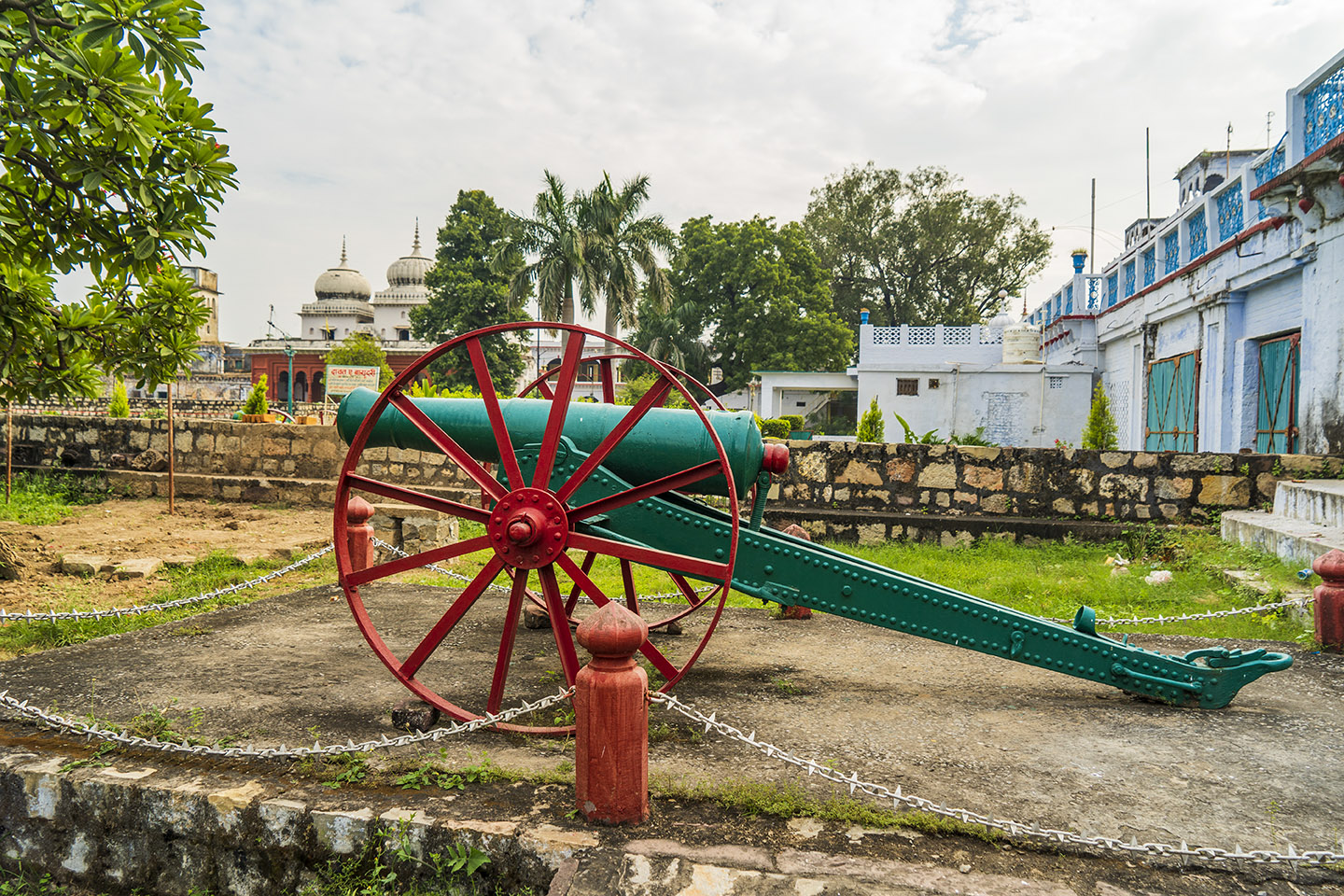 A royal canon at the Rewa Fort

Day 6: Baghelkhand
Make your way to Baghelkhand, to the former princely state of Rewa. The construction of the fort here was started by Salim Shah, but was finished by the Baghel ruler Vikramaditya in the early 17 th century. The royal family still stays here and there is a small museum with many artefacts, weapons, and stoneware. There are numerous pictures and documents of Maharaja Pushparaj Singh, the present king as well as the rest of the royal family.
About 19km from here is the beautiful Govindgarh Palace, which was commissioned by Raja Raghuraj Singh in 1857, right on the banks of the picturesque Raghuraj Sagar Lake. A desolate sight as it stands abandoned now, many parts of it are in ruins.