Deep in the jungles of Ratapani, tucked into the fold of the Vindhya Hills, live elephants with magnificent upward curving tusks and a massive wild boar taller than an adult man. Observe these animals of gargantuan proportions up-close at the Bhimbetka Rock Shelters. The UNESCO World Heritage Site preserves the rich and ancient history of Madhya Pradesh in its rock shelters, adorned with cave art featuring prehistoric animals and humans.

Occupied by early humans from the Paleolithic to the Medieval ages, the shelters date back about 100,000 years, but were discovered only recently in 1957 by archaeologist Vishnu Wakankar.

The craggy sandstone rocks of the Vindhyas in Ratapani have more than 700 rock shelters in five major hill clusters. Bhimbetka is one such cluster on a hill with 243 rock shelters of which 133 have cave art. Well developed with pathways and signboards, 15 of Bhimbetka’s rock shelters are open for public viewing. The art is estimated to date as far back as 15,000 to 30,000 years, but much of the cave art on display is between 4,000-6,000 years old. 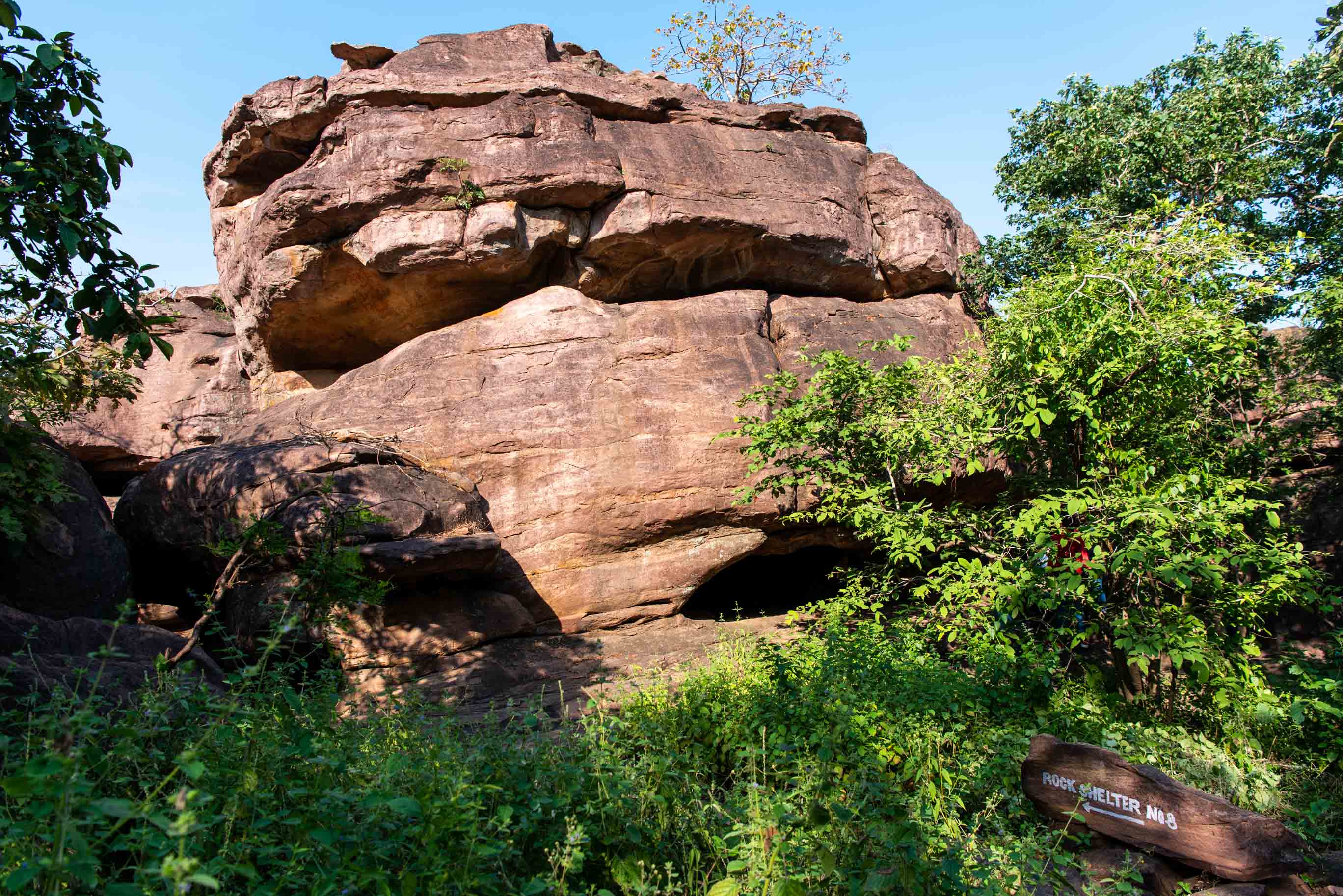 Similarly, a group of over 700 sites of prehistoric rock art of the Iberian Mediterranean Basin, in Spain, also known as Levantine art, were collectively declared a World Heritage Site by UNESCO in 1998. The sites contain rock art dating to the Mesolithic Period of the Stone Age. Lascaux, in France, is another complex of caves near the village of Montignac, Dordogne, with over 600 parietal wall paintings covering the interior walls and ceilings of the cave.

A walk through Bhimbetka rock shelters is a walk through the pages of time. The considerable social and cultural changes in early human society and significant developments in the course of history are  etched to be eternally preserved in the cave art – like an open-air history book with pictures! Excavations led to the discovery of ancient tools, implements, and pottery, and explorations of the rock shelters uncovered art featuring the hunting of animals, battles, as well as scenes depicting celebration with music and dance.

Great towers of sandstone rise majestically from the ground, and in their cracks and crevices, ancient art offers a peek into the lives of our ancestors.

A Class in Art History

The cave art predominantly features animals and hunting scenes, as well as friezes of community life. Group dances, war processions, and musical instruments are also commonly seen in Bhimbetka’s paintings. The art reveals itself in layers. Sometimes, the same rock surface was used several times by artists of different historical periods. Without destroying the older art, they superimposed their own creations on the same canvas. As many as 15 layers of art have been discovered at Bhimbetka. 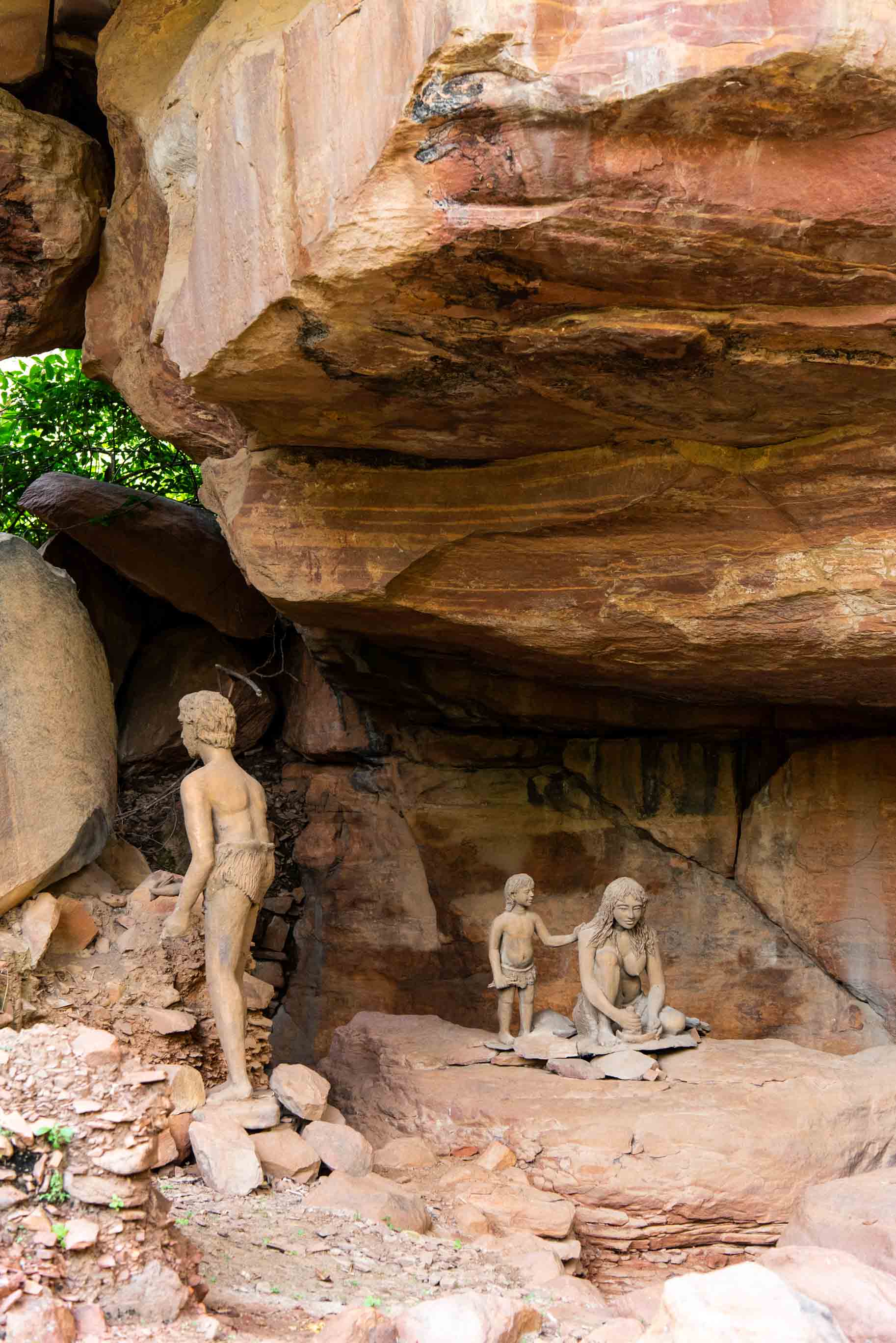 Portable installation of ‘Bhimu and his family’ at Cave number 1

Unlike modern day art, cave paintings were done on bare rock surfaces without any prep on the surface. In the absence of any plastering or smoothening of the rock, it is fascinating that the colours are still intact on the rocks after millennia. Sandstone is a sedimentary and highly absorbent rock, able to retain colours that seep into its surface. To paint, natural soft fibres and hair were used as brushes, and in some cases paint was applied using fingers.  Mostly white and red colours were used with the rare appearance of green and ochre. To make these mineral colours, the artists of yore turned to the elements, using white clay, iron ore, stones, vegetable dyes, and plant products to create the palette they needed.

Some shelters and spots in Bhimbetka stand out in particular. Take a walk to these stunning sites and marvel at the beauty.

Zoo Rock: In a semi-circular gallery of sandstone rock, see 252 animals across 16 species, including elephants, deer, and bears. The Zoo Rock is an aptly named shelter and immensely popular for its clear depictions of prehistoric wildlife. Apart from white line drawings of many animals, there is a singular bird, as well as 90 humans. Estimates suggest that the art spans multiple periods, from the Mesolithic Age to the Chalcolithic Age. There is also a depiction of a royal procession with soldiers wielding weapons like swords and shields and riders on horses. 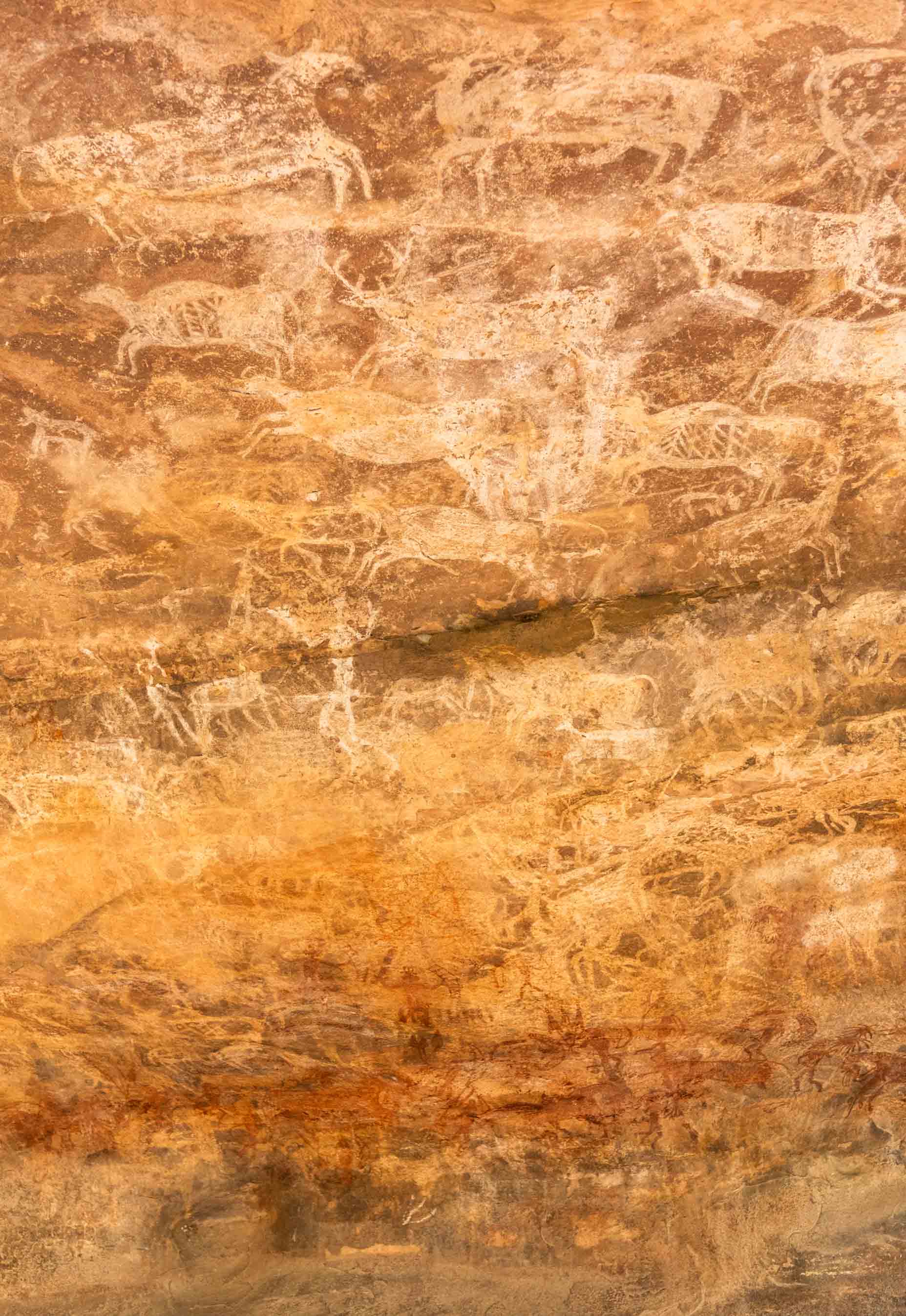 A group of animals on large flat ceiling at Cave number 5, popularly known as the zoo rock

Boar Rock: Shelter 15 is a little way off the main path but remains one of the most important sites in Bhimbetka. A huge mushroom-shaped rock is the canvas, and painted on it is a fearsome creature of immense proportions. A massive wild boar, with curved horns and a large snout with bristles, chasing a human, a fraction of its size. In front of the human is painted a large crab. It is fascinating to imagine the events that must have inspired this scene, at the same time, it is a frightening insight into what kind of life the early settlers here must had. Painted high above the ground and shaded from above by an overhanging rock, the boar painting is among the best preserved art at Bhimbetka. The deep-red colour of the boar and the fleeing man still retains its lustre, protected from human elements because of its height, and protected from the elements by a natural rocky shelter. This particular site is also fascinating because of the role reversal that it portrays. While much of the other art features men -hunting animals, here, an animal of unreal proportions hunts a human.

Turtle Rock: From an elevation, get a sweeping view of forested valleys, the plains of the Betwa River, and Bhojpur in the far distance. Over millions of years, the elements have weathered the sandstone into fantastical formations. The ‘Turtle Rock’ is one such vantage point, where a weathered stack forms a distinct turtle shell-like structure.

Survival of the Fittest

Sculpted by the elements, the natural rock shelters were formed after years of erosion, providing a safe haven for the early dwellers. Rock Shelter 9, for instance, is a massive cave with a natural roof and good cross ventilation, where up to a 100 people could take shelter. The dense forest surrounding Bhimbetka was a rich source of sustenance with mahua, tendu, and jamun trees, several medicinal plants, as well as edible flowers and fruits. Along with the Betwa River to the north of Bhimbetka, there are streams, as well as the Narmada River to the south, which continue to be water sources for the region today.

Getting there: Bhimbetka is 45km/100 minutes from Bhopal by road