From its source at Amarkanta, to the temple towns of Maheshwar and Omkareshwar, the ghats of the Narmada reverberate with prayers, chants, and the heartfelt thanks of millions who depend on it.

At Maheshwar, boat rides along the Narmada are great for sunset views

The fifth longest river on the Indian subcontinent, it flows for 1,312 km in a rift valley between the Satpura and Vindhya ranges. The Narmada was traditionally considered the boundary between North and South India. It was on the Narmada’s banks that Chalukyan emperor Pulakeshin II of Karnataka defeated Harshavardhana of Kannauj. At Raverkhedi, where Peshwa Baji Rao died in 1740, the spot is marked by a chhatri (memorial) built by the Scindias.

Unlike the Ganga, Yamuna, and other Himalayan-born rivers, the peninsular rivers Narmada and Tapti flow west and are much older. From the earliest of times, they have held deep religious and social significance. According to the Vedas, the merit you accrue by taking a dip in the Ganga is the same as having a darshan of Narmadaji. And the merit gained by looking at the Narmada is the same as just remembering the Tapti.

Baneshwar temple sits on a tiny islet midstream on the Narmada river, and is accessible
only by boat

Many pilgrims do a Narmada parikrama, starting at its source in Amarkantak, to its mouth at Bharuch, Gujarat, and back up along the northern bank—an incredible journey of 2,600 km. The Narmada is so sacred that to cross it while circumambulating it is unimaginable. This river is revered so much that it is believed that even the holy Ganga assumes the form of a black cow, to take a dip here to wash away her sins.

Narmada arti on the ghats of Maheshwar

At Maheshwar, we witness the serene evening arti by the Narmada. After the ritual, the priest of the Narmada Mandir tells us fascinating stories about the river. Born from the sweat of Shiva, she is hailed as Shiv-putri, the daughter of Shiva. “Some say she is both nar (male) and mada (female); others contend she is called narmada because she is narm (soft), bestowing a feeling of peace on the beholder. She is also called Rewa after her leaping motion through a rocky bed,” explained panditji. “She has other names too” piped in others in the group. “Sonsursa, Mahti, Krapa,…” The list went on; the names flew thick and fast.

Another Narmada legend relates to Maheshwar, which was once Mahishmati, capital of the thousand-armed king Sahasrarjun. The king once blocked the mighty river with his arms so his 500 queens could play in the waters. Downstream, on seeing a dry riverbed, Ravana had stopped and built a sand shivalinga for his daily prayer. Once his wives had finished, Sahasrajuna allowed the river to flow again, which swept away Ravana’s shivalinga. Furious, he challenged Sahasrajuna, who pinned him to the ground, imprisoned him and placed lamps on his heads and hand. Even today, the Sahasrarjun temple at Maheshwar lights 11 lamps in memory of the event.

Local guide Ghanshyam Malviya or Guruji, narrates legends of river Tapti at the Baradari
in Burhanpur

Miles away in Burhanpur, we felt similar peace on the banks of the Tapti. Viewing it from Shahi Kila and Baradari, our guide Ghanshyam Malviya explained that Surya, the sun god created the river, because he was unable to bear the heat of his own body.  Our guide asks us to call out “Jai Tapti Maiyya” and we obey. With that powerful invocation, we had performed the equivalent of a holy bath in the Ganga!

The painted exterior of Balaji Mandir in Burhanpur, is famous for its three-day Balaji ka
Mela, held on the banks of the Tapti river

Narmada Jayanti is celebrated in February with a grand maha arti at Maheshwar and a 1000 m long chunri (dupatta) drawn in boats across the river from one bank to the other. For seven days prior to the event, a katha (puranic lore) is related, which traces the Narmada’s route from its source to its mouth. In Burhanpur, the ancient Balaji Mandir’s idol is taken on a procession through the streets end-September, culminating in a three-day mela at Satiyara Ghat on the banks of the Tapti. 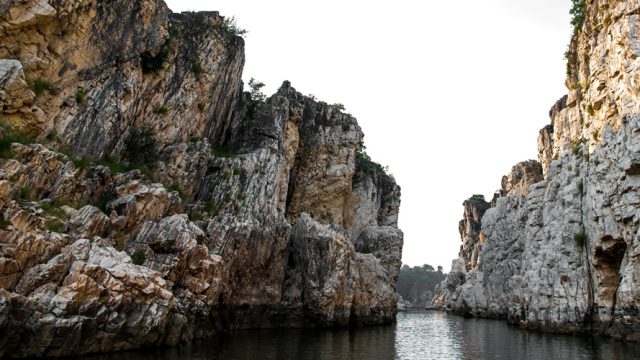 Serene boat rides down the Narmada River, between towering... 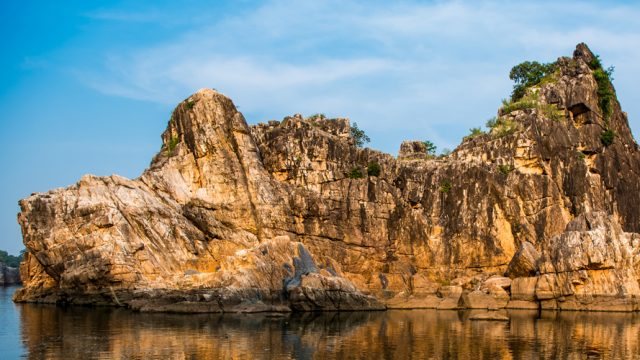 ﻿On the River’s Edge

Towering marble cliffs and a cable car ride above a... 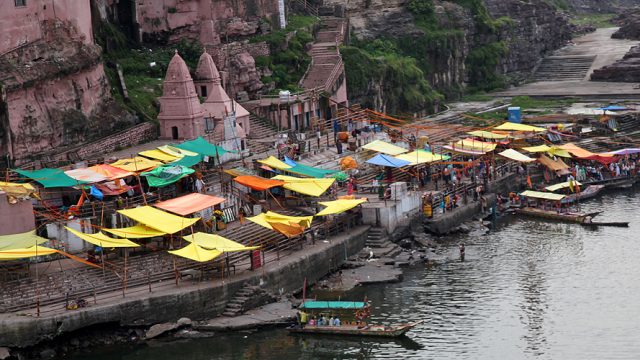 From source to sea and back, a river pilgrimage along the...