A famous Kannada writer's launch of a new political party, some say, is reminiscent of the excitement of Neruda's involvement in Chilean politics in the '60s. Would it fulfil what Rammanohar Lohia and Ambedkar dreamt together? 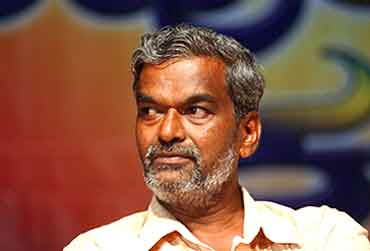 outlookindia.com
-0001-11-30T00:00:00+05:53
It is on a rickety old moped that he crisscrosses Mysore, attending functions and meeting his people. His unkempt hair, untrimmed beard and crumpled cotton shirt of nondescript colour will clearly tell you that he is not into image management of any sort. He often walks away from a group to take a lonely drag of cigarette and joins them back for half-a-cup of tea after staring lost into the sunlit noon sky. When he talks, he thinks, it is never a prepared speech of platitudes, and it is full of metaphors and from the depths of intensity.

This description, well, suits Devanur Mahadeva, a writer par excellence in the Kannada language; the author of the classic novel Kusumabale; the winner of the Sahitya Akademi award; a former writer in residence at Iowa University who has been translated into English by none other than the legendary A K Ramanujan. But would this description also suit the president of a political party, when simplicity and ideation have become anachronistic in our political culture? Mahadeva hopes the ground rules will change in the state with the political party, Sarvodaya Karnataka, that he has helped found less than a month ago.

Mahadeva's new party claims the legacy of Buddha, Basavanna, Gandhi, Ambedkar, Lohia, Devaraj Urs and Gopala Gowda. "Ours will be a Democratic Socialist party in the true sense," he says. The low-key launch of this party was a contrast to the launch of Mulayam Singh's Samajavadi Party around the same time in Bangalore. This new party is also about the fulfilling of the dream of a political party that Rammanohar Lohia and Ambedkar together dreamt of launching around 1956, but aborted due to the death of Ambedkar. 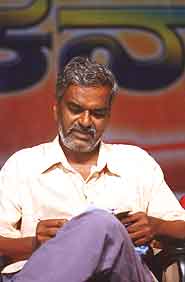 The constituency that Sarvodaya party tries to primarily address is that of Dalits and farmers, but will include all the marginalised and socially disabled (in the context of globalisation) sections of the society, including women. Some factions of the Raitha Sangha and the Dalit Sangharsha Samithi, which have some previous electoral experience, have come together to form this party, while serious efforts are on to bring all the other Dalit and farmers organisations in the state together. "This party will help Dalit and farmers' organisations to come out of their trade unionist mindset and think of forging alliances with a larger interest."

In some ways, the bringing together of farmers and Dalits, who have traditionally had the relationship of landlords and bonded labourers, is seen as a social revolution, a simulation of the 12th century Veerashaiva movement in Karnataka. "In a rural setting, socially and culturally a Dalit and a farmer are the same, it is just the artificial varna caste line that separates them and we want to blur that permanently," says Mahadeva and adds:

"At the moment we are standing one above the other in a pyramidal structure, in this structure the one at the bottom is seen as the sinned. To keep this structure we have misused the names of gods. In Christianity, if a black man enters the fold, the white man does not think that the god will be angry, but here we think we have enraged the gods when a Dalit enters the Hindu fold. We want to change this, we want to make people stand next to each other. By removing the static pyramid we make social relationships dynamic and we want to achieve this without violence."

But what with the fact that caste politics in post-Independent India has always had a militant approach? Mahadeva, who is himself a Dalit, says that the anger and hurt needs to be converted into a constructive programme.

So what's the constructive programme of the Sarvodaya party? Mahadeva highlights two things from a big list: One, is to teach and encourage farmers to follow the methods of natural farming, "by this we will ensure that the multinational companies that sell pesticides and genetically engineered seeds will commit suicide instead of our people." Two, to tap knowledge and other resources of people who have migrated out of villages under the 'Do your bit for your village' programme. "At no point do we want to tell people to emulate the Mahatamas, on the other hand we want to recognise little Buddhas and Gandhis among them," says Mahadeva. 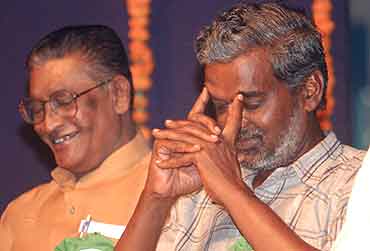 Mahadeva's Sarvodaya party has also consciously decided to give up the culture of erecting cutouts, burning effigies, shouting 'murdabad' and calling for a bandh. "We want to bring in a new constructive political culture, we want to go to the people with not the idea of protest but with a programme that will ameliorate their daily living," he says.

But when we ask Mahadeva for a pragmatic analysis of his party's chances at the hustings, he says:

"We are not afraid of failures, all that we want to do is to to provide a robust opposition party in Karnataka, because all major political parties are eternally waiting to share the spoils of power. We also do not want parties with obstinate ideological positions to rule the state. The ones who either give primacy to God or violence in their ideologies, I mean the BJP and the Naxals. These people would have disastrous consequences on our social fabric. Ideally, ideology should be like grammar, something that should be forgotten after the language is learnt."

The Sarvodaya Karnataka party and Mahadeva's involvement in politics has generated such positive vibes and intellectual curiosity in the state in the last couple of weeks that it is reminiscent of the excitement of Neruda's involvement in Chilean politics in the '60s. But the last word came from Kannada cultural icon Rajkumar. In a private conversation he said: "I always thought that politics was about girding your loins and throwing muck at each other. If I only knew that politics can be practiced in this simple, straight and sincere fashion, I would have entered it long back."

The only word of criticism being heard about the new party is "Naïveté". But then the same people agree that hope should be given a big chance.

In Search Of The Razor's Edge