The Army and security forces continued flag marches in Guwahati city, a day after two persons were killed in police firing during the violent protests. 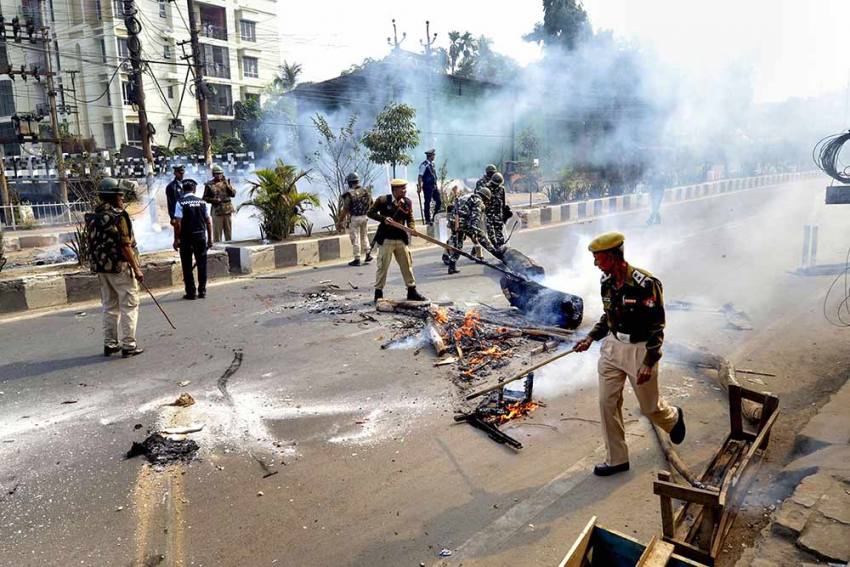 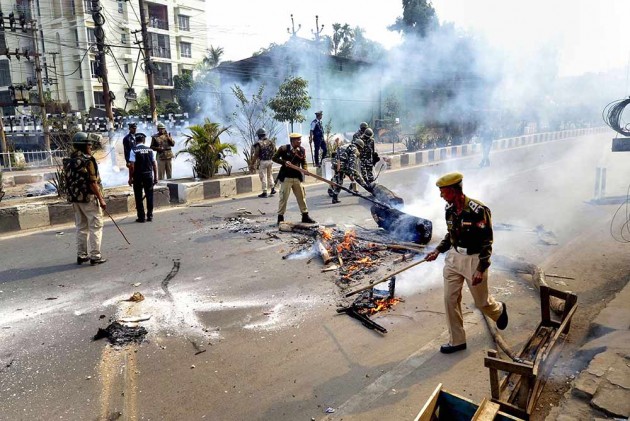 The protests against the Citizenship (Amendment) Bill, now an Act, have spread tovarious parts of the country, including the national capital which witnessed sme violent scenes on Friday.

The controversial bill that will grant Indian citizenship to non-Muslim migrants from Pakistan, Afghanistan and Bangladesh, was passed by the Rajya Sabha on Wednesday and given assent to by President Ram Nath Kovind on Friday.

Despite a curfew in place, protesters marched to Raj Bhavan in Meghalaya’s capital city, Shillong where they clashed with the security forces. The police fired tear gas shells and lathi-charged to quell the protesters.

The state government had imposed curfew in parts of Meghalaya on Thursday and snapped mobile Internet and SMS services for 48 hours across the state.

In Guwahati, people continued to pour out on roads, defying the curfew that is in place since Wednesday, to protest against the Act. The tensions rose high in the capital city where two civilians were killed in police firing on Thursday during protests. However, no major violent incident was reported from the capital city.

Meanwhile, the Army and security forces continued flag marches in Guwahati city. Given the uncertain situation, long queues were seen outside grocery stores, shops selling poultry items and fish. Many said they were stocking items for at least three-four days in case the curfew is extended.

Meanwhile, Japanese Prime Minister Shinzo Abe's visit to India for an annual summit with his counterpart Narendra Modi in Guwahati was cancelled in the wake of violent protests.

Diplomatic sources said the Japanese government clearly conveyed to New Delhi that it would not be possible for Abe to travel to Guwahati in view of large-scale protests in the northeastern region.

They said the summit is now expected to take place next year.

Several cultural personalities and civil society members are sat on a 10-hour fast for following a call given by the All Assam Students Union (AASU), which is spearheading the protests.

AASU chief advisor Samujjal Bhattacharya said, "We will not succumb to any pressure and our agitation will continue."

People of Nagaland, who had been busy all of last week celebrating Hornbill Festival, were seen rushing to goods stores on Friday to hoard essential items, amid tension that curfew in neighbouring Assam might hit supplies.

As Assam happens to be the lifeline of Nagaland when it came to supply of essential commodities, people were skeptical they might have to face food and medicine shortage in the days to come, official sources said.

Long queues were also witnessed at fuel outlets in state capital Kohima and commercial hub Dimapur, with most of the pumps drying up by noon.

In Arunachal Pradesh’s Itanagar, thousands of agitators, led by Rajiv Gandhi University Students' Union (RGUSU) and Students' Union of NERIST (SUN), marched from the varsity to Raj Bhavan, covering a distance of around 30 km on the hilly terrain.

Local people, along with those belonging to the Assamese community, also joined the rally here to protest against the controversial law, most of them raising slogans against the BJP-led government at the Centre.

While normal life appeared getting back on track in the northeast, West Bengal singed with protests in Muslim dominated areas of rural Howrah, Murshidabad, Birbhum, parts of Burdwan and North Bengal.

"Several parts of the station, kisoks of RPF and tracks were set on fire. Train services have come to a halt here," a senior RPF official said after arson at Beldanga railway station.

Rail and road traffic was disrupted in several parts of West Bengal.

Chief Minister Mamata Banerjee has announced statewide protests from Monday, saying that she will lead a rally from the base of B.R. Ambedkar's statue here.

The Jamia Millia Islamia University turned into a battlefield after police and students, who wanted to march to Parliament House to protest the Citizenship Act, clashed with each other.

Fifty students were detained following a clash between police and students after the protestors were stopped at the varsity gate and prevented from carrying out their march.

Aligarh district administration blocked internet services in Aligarh since midnight in view of the protests planned against the amended Citizenship Act.

However, hundreds of Aligarh Muslim University students and teachers went ahead and organised separate protest marches and handed over two memorandums to authorities, demanding immediate withdrawal of the amendments made to the Citizenship Act.

Chief Minister Mamata Banerjee, one of the foremost opposition voices against the citizenship act and national register of citizens (NRC), declared the amended law will not be implemented in West Bengal.

The chief ministers of Punjab and Kerala echoed the same, saying they will not allow the Act to be implemented in their states. It was followed by Madhya Pradesh CM Kamal Nath who also appeared set to reject the amended act. He asserted in New Delhi that it was part of the Centre's "politics of distractions" to deflect people's attention from economic slowdown.

Opinion | CAB Not Based On Religious Intolerance, Has Nothing To Do With India’s Muslims