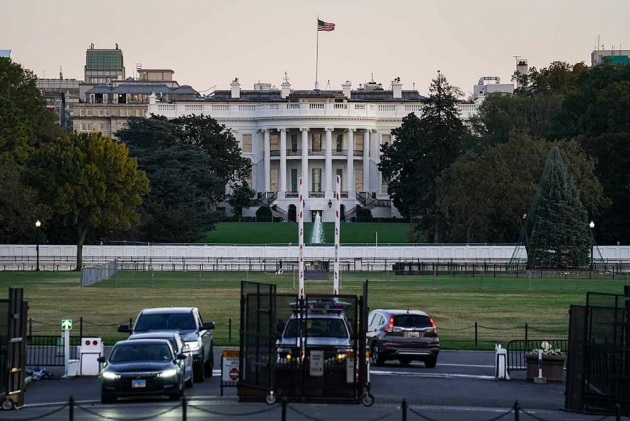 Security has been tightened at the White House and at major commercial avenues across the US, with retailers safeguarding their stores, as America is bracing for possible unrest and violence as the country goes to polls today.

Vital government installations are on high alert while the Secret Service has fortified the White House. A "non-scalable" wall has been temporarily erected around the sprawling presidential complex ahead of the voting on Tuesday. About 600 National Guard troops have also been kept on stand-by in case protests break out across the country.

On election eve, contractors were seen busy boarding up major stores and businesses all across the country including in places like New York, Boston, Chicago, Washington DC and San Francisco.

Explained: What's 270? The Math Game Behind The US Election

Stores along the posh 5th Avenue in Manhattan as well as across New York city boarded up and workers were seen drilling plywood onto the stores’ facade late in the night, amid fears that election day could bring violence, looting and clashes, similar to the chaos seen in the summer during protests over the death of George Floyd.

New York City Mayor Bill de Blasio on Monday said that he has spoken with Police Commissioner Dermot Shea and claimed that there is no specific reports or threats of violence at this point.

“Everyone, of course, is concerned about the election results and what plays out after. But I want to emphasise, at this moment, we don't see a specific challenge. We are ready for all sorts of challenges. A lot of preparation has been happening over the last few weeks,” de Blasio said during a press conference.

However, he added that everyone should be prepared for any eventuality and condemned Trump for expressing doubts over the outcome of the presidential elections. “And, right now, we're all very troubled, seeing the President of the United States question in advance the validity of the election. We've never seen that before from a president. We've never seen a president encourage voter suppression and harassment in this kind of fashion. The American people are going to have the final say here,” de Blasio said.

The mayor added that over 95 million Americans have voted early but “we are in an unprecedented time, there's a reason people are so worried, but I want folks to know this city is prepared. I want folks to know that for those who want to express themselves about the results, the way to do that is peacefully. That will always be honoured.”

After looters ransacked luxury stores in Manhattan in June, during protests over George Floyd’s death, some businesses in New York City are on edge and are bracing for any potential instances of violence.

The 2020 US Presidential Election is being touted as the “election of a lifetime” and is seeing an unprecedented level of anxiety and fear across America in the wake of a bitter election campaign.

Supporters on both sides, including the groups involved in the "Black Lives Matter" agitation, have announced to take part in a gathering in downtown Washington DC on Tuesday night as the results start to trickle in after the counting of votes.

Washington DC, also saw exaggerated security activity. “Retailers have already sustained an estimated USD 1 billion in insured losses from property damage and theft this year, according to early estimates from the Insurance Information Institute, making this year's protests the costliest civil disorder in US history," the Washington Post reported.

In Chicago, a number of stores along its famed Magnificent Mile have downed their shutters and boarded up the windows. Similarly, shops at the Rodeo Drive in Los Angeles and midtown New York City have taken ample precautions. Rodeo Drive houses the world's top designer labels, including Armani, Chanel, Dolce & Gabbana. Walmart, earlier in the week, had removed guns and ammunition from its outlet.

The police chief of Beverly Hills, California, has warned about election-motivated violence. On Monday, he told CBS News that officers were working on 12-hour shifts with no off days. "Basically what we are doing is preparing for the worst and hoping for the best," Chief Dominick Rivetti told the news channel.

Late on Monday evening, President Donald Trump tweeted that the Supreme Court's decision on counting of votes in Pennsylvania will incite violence.

“The Supreme Court decision on voting in Pennsylvania is a VERY dangerous one. It will allow rampant and unchecked cheating and will undermine our entire systems of laws. It will also induce violence in the streets. Something must be done!” Trump tweeted. Twitter has flagged the tweet.

The top court has allowed ballots to be counted up to three days after Election Day in Pennsylvania.