School In These States Will Reopen; Check Full List

Keeping preventive measures in mind, many states across the country have decided to reopen for certain classes. Check out if schools are reopening in your state. 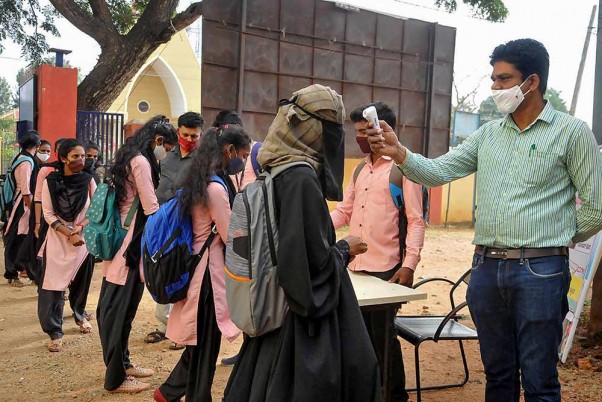 In view of the pandemic, all schools and colleges were closed across the country. However, with the falling number of Covid-19 cases and the beginning of the nationwide vaccination programme, several states have opened their gates for physical classes. Most schools have been reopened only for classes 10 and 12 but many others have started physical classes for junior classes as well.

Regular sanitisation, ensuring social distancing through CCTV cameras, staggered timings: several precautions have been planned out for the reopening of schools after months of waiting. m:

DELHI: The Delhi government has decided to reopen schools outside containment zones for classes 10 and 12  from January 18. However, physical attendance has not been made mandatory for students and they shall not attend school without their parents' consent. The Directorate of Education (DoE) has directed school authorities to follow all safety guidelines.

Schools in Delhi have planned out various initiatives to ensure the safety of their students, including placing sanitiser consoles in the corridors, conducting temperature checks, allowing 15 students at since in a classroom and deploying volunteers to ensure social distancing. Further, plans are also being made to ensure that the students who cannot attend their classes physically, do not miss out on anything.

TAMIL NADU: Schools in Tamil Nadu are all set to reopen from January 19 for classes 10 and 12, in view of the board exams. The state health department has directed its officials to screen students and staff members for COVID-19 within a week.

The Directorate of Public Health and Preventive Medicine has also mandated cleaning of school premises by school management besides the creation of sufficient hand washing facilities and following the SOPs without any deviation. It has also mandated giving students Vitamin C, multivitamin tablets and other immuno-boosters.

RAJASTHAN: Schools and other educational institutions in Rajasthan have been reopened for classes 9 to 12 from January 18. Preventive measures such as mandating the wearing of masks, making COVID-19 tests mandatory for outstation students and ensuring a 30 minutes gap between two batches in coaching institutes and the classrooms, during which they will be sanitized.

After the reopening of educational institutions in the state on Monday, however, the turnout has been recorded to be significantly low. "The turnout of students was quite low today, particularly in classes 10 and 12. Hopefully, it will increase over the next few days. Parents are in a wait-and-watch mode before allowing their wards to attend regular classes," said Sanjay Parashar, spokesperson of Subodh Public School, Rajasthan.

MIZORAM: According to the new unlock guidelines issued by the state government, schools and hostels in Mizoram shall open for classes 10 and 12 from January 22. The new guidelines also said any student intending to join his or her hostel must produce a COVID-19 negative certificate obtained within 96 hours before entry into the hostel.

MADHYA PRADESH: The state government decided to reopen schools for classes 9 to 12 from December 18. Each class has been directed to be conducted on alternative days with 50 per cent capacity. However, according to an official, at least 10 students in from Government Girls Excellence School in Shahpur have been tested positive for COVID-19.

The reports of these students came out positive for the infection on Saturday adding that reports of 25 more students are awaited, said Principal Virendra Namdeo. The school has been shut for a week now and the infected students have been told to isolate themselves.

WEST BENGAL: Schools in the state have not been reopened for any classes yet. West Bengal Education Minister Partha Chatterjee shared earlier that schools shall reopen when students and teachers will have no risk of getting infected.

" There have been instances of people getting infected after the resumption of classes in another state, where schools had to shut again. We don't want to have the same experience in Bengal. We will take the decision of reopening of school campuses at the appropriate time", shared Education Minister Chatterjee.