The Aam Aadmi Party (AAP) on Tuesday pulled off a repeat of its 2015 performance, winning 62 of the 70 seats in the Delhi Assembly. 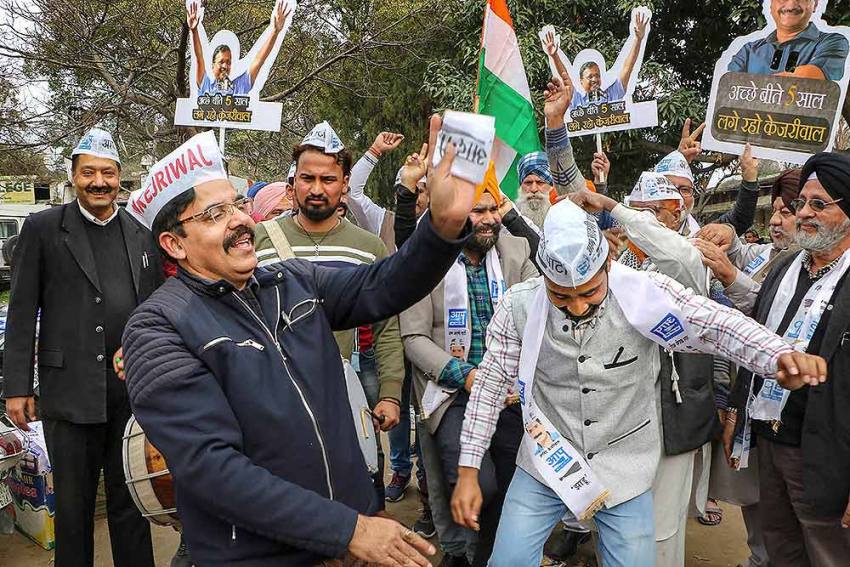 Aam Aadmi Party workers celebrate the party's victory in the Delhi Assembly polls, in Jammu.
PTI
IANS February 12, 2020 00:00 IST AAP Swept Delhi Election And These Candidates Brought A Tsunami Of Their Own 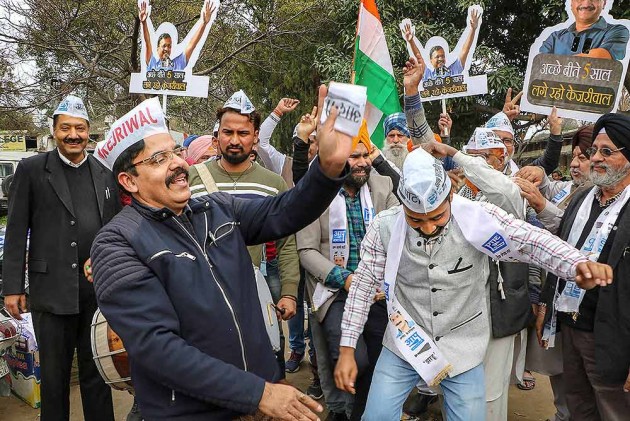 With Aam Aadmi Party repeating the 2015 feat and sweeping Delhi assembly elections, voters of Delhi gave a clear mandate to the youngest party in contest with 62 of the 70 assembly seats in Delhi. However, apart from the party, there were some candidates who swept the polls with their dominant run, and registered a victory with a margin of over fifty thousand votes.

Here is a look at these candidates and their constituencies.

Burari, one of the most populated and a Purvanchali-dominated assembly constituency, has several illegal colonies and is often referred by Delhi residents as a hotbed of crime, bad roads and lack of water and sewerage system. AAP had nominated Sanjeev Jha as its candidate, who in return proved worthy for the belief as he registered a massive victory with a margin of 88,158 votes. Jha received 1,39,598 votes with 62.81 per cent vote share while his nearest opponent Shailender Kumar from the BJP got only 51,440 votes with 23.14 per cent vote share. Of the 3,57,331 voters, only 1,58,218 are females and the constituency has a sex ratio of 795, below the state's gender ratio of 824. Purvanchalis -- people from the eastern UP and the western Bihar -- accounted for around 44 per cent of the population and thus played a crucial role in elections.

Okhla, with Shaheen Bagh becoming an epicentre of anti-Citizenship Amendment Act protests and scores of politicians making a beeline to express solidarity with the protesters there, the Congress was eyeing a comeback on this seat with considerable Muslim voters by riding on the protest wave. However to Congress' disappointment, the party slipped to the third place while the AAP candidate Amanatullah Khan clinched the seat with a huge margin of 71,827 votes over his nearest rival Braham Singh from the BJP who could get only 58,540 votes with a vote share of 29.65 per cent. Khan received 1,30,367 votes with a vote share of 66.03 per cent.

Matia Mahal assembly Constituency had witnessed a lot of improvements during Arvind Kejriwal's five-year term, but people were claiming that the government's inability to complete the pending projects may not go down well with the voters this time. However the election results proved them wrong, with AAP's Shoaib Iqbal winning the elections with over 50 thousand votes. Iqbal defeated his nearest rival BJP's Ravinder Gupta by 50,241 votes as he got 67,282 votes with a massive vote share of 75.96 per cent, while Gupta managed only 17,041 votes with 19.24 per cent vote share.

Seemapuri's border location makes it a hub of criminal activities like pick-pocketing, chain snatching, mobile snatching, murders as the criminals can easily hop over to the other side to escape jurisdiction. It encompasses Nand Nagri, Sundar Nagri, GTB Enclave, New Seema Puri, Dilshad Garden and others, a mix of well-developed colonies, like the Dilshad Colony - inhabited by salaried and high-income people - as well as the slum areas.