From the South Pacific, to the Caribbean, to Southern China, to the heart of Central Asia, to the capitals of the major Western states, a previously unknown group of Muslims from a remote corner of China have captured the world's attention. 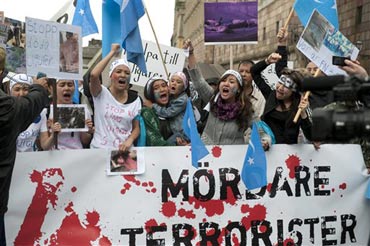 It took just a few minutes for news of the attack on Muslim migrant workers that left at least two dead in a toy factory in Southern China to travel 3000 miles to their homeland, the Uighur Autonomous Region known as Xinjiang. Ten days later, the ensuing riot in Urumqi, the capital of Xinjiang and largest city in all of Central Asia, led to 156 dead and over 1500 arrested. Iranian-style, the Chinese government not only reacted swiftly and harshly to the protesters, but also attempted to seal off the region and shut down all international communications and access to global media. They did, however, cover much of the uprising on their own state-run television stations and allowed foreign journalists into the riot zone.

Sympathy protests have not only spread to the traditionally restive southern oasis towns of Kashgar and Khotan, but also as far away as the Netherlands, Munich and Istanbul, where large numbers of Uighurs have staged protests in front of the Chinese embassies.

The Chinese government has blamed a female Muslim American émigré Rebiya Kadeer, as well as international organizations based in Washington, DC, Munich and London, for "masterminding" the uprising from afar. At the same time, in Washington, the US government is preparing for the release of the remaining 17 Uighurs from Guantánamo, Cuba to the tiny island country of Palau (after previously resettling several others in Bermuda and Albania). From the South Pacific, to the Caribbean, to Southern China, to the heart of Central Asia, to the capitals of the major Western states, a previously unknown group of Muslims from a remote corner of China have captured the world’s attention. The new media of Twitter, Skype, YouTube, video- and text-messaging have linked these disparate peoples and places like never before, contributing to perhaps the world’s first "ethnic pandemic." Spreading across China and around the globe almost instantaneously, the events in Urumqi have brought attention to a minority Muslim people of whom most had never heard. 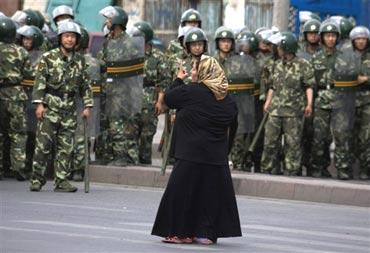 An Uighur woman faces off with Chinese paramilitary police in Urumqi

After decades of civil war, the region known as Eastern Turkestan was brought firmly under Chinese control when it was "peacefully liberated" by the PLA in 1949. At that time, the Han population was approximately five percent of the total, with the Uighur population in the vast majority. The unchecked migration into the region of the Han, who have often received preference for both skilled and unskilled jobs, has further marginalized the indigenous Uighurs, especially the younger male working population. Not finding work at home, and prevented from travelling abroad, many of these Uighur men have been forced to look for work across China, leading to ethnic rivalry of the kind seen recently in the Xuji toy factory in Shaoguan, Guandong.

Some believe this contagion could have been stopped at the border. Resembling less the Tibetan unrest of 2008 than the Rodney King riots of 1990s Los Angeles (when a brutal beating of an African-American man by the police triggered widespread violence), this uprising is the worst violence in Xinjiang since the founding of the People’s Republic (which will celebrate its 60th anniversary this year); and it has nothing to do with separatism, terrorism or the Islamic religion. Yet China makes little distinction between separatists, terrorists, and civil rights activists – whether they are Uighurs, Tibetans, Taiwanese or Falun Gong members. This "mass incident" was precipitated by fatal attacks on Uighur workers, mentioned above, due to an "unintentional scream" of a female Han Chinese worker who now admits being startled when she mistakenly walked into a male Uighur workers’ dormitory. This led to the spread of a false rumor that the Uighurs had raped two Han Chinese women, disseminated by Han workers disgruntled by over 800 Uighurs from Xinjiang receiving priority for jobs in the factory. (There are now approximately 1.5 million ethnic minorities working in Guangdong alone through a state-sponsored preferential employment program.) Yet the underlying ethnic tensions in Xinjiang that provided fertile pre-conditions for such an angry response suggests that a cure might not be easily found.

For the past 50 years, the Chinese government has tried through minority affirmative action policies and strict controls to integrate the region known as Eastern Turkestan into a "harmonious" part of the People’s Republic. The last census taken in the Xinjiang Uighur Autonomous Region revealed that though the nearly 8.4 million Uighur residents maintain a bare majority in their own land, the resident Han Chinese population has risen to 38% (the Uighur population stands at 42%). Nevertheless in terms of education, health and mortality, the Uighur lag far behind the Han in quality of life, and even behind most other Muslim groups in the region. (There are seven other official Muslim minorities in Xinjiang, including over 1 million Kazakhs and 500,000 Hui, as well as Kyrgyz, Uzbeks, Tajiks, and others).

Despite the extraordinary transformation of the region due to economic investment and infrastructural development, with the goals of harvesting its vast mineral and oil deposits and further integrating the region into China, the Uighur people believe they have not benefitted as much as have the masses of Han migrants living in "their" homeland. The viral dissemination of this conflict suggests that global communications not only foster greater awareness of this region, but may even exacerbate its underlying problems.

The tensions between Han and Uighur in Xinjiang have been simmering for decades, but the downturn in China’s economy as part of the global fiscal crisis has caused further pressure, as the Uighurs feel discriminated against in their own region. The fact that protests took place initially in Urumqi, where Uighurs are only 12.8 percent of the population and Han are 75.3 percent, is significant in that previously most of the violent incidents took place in the southern oasis towns such as Kashgar, Khorla, and Khotan, where Uighurs are much more numerous. Due to the rural nature and inaccessibility of these towns, separated by vast deserts and high mountains, news rarely reached the outside world. Now, thanks to the widespread availability of electronic media, especially in urban centers like Urumqi, the Uighurs can give voice to their anger and seek world sympathy.

All pandemics have three aspects: the initial virus, the vector transmission and an available host. The viral pre-conditions for this epidemic include severe unemployment, unequal opportunities, uneven distribution of wealth and ethnic discrimination. The new media that allow for rapid global dissemination provide many different vectors for transmission of information as well as dis-information. The available hosts are now dispersed worldwide through an active and increasingly connected Uighur diaspora, who are concerned for their people and seek to effect change in their homeland. Some estimate that there are nearly a million Uighurs outside of China, with the majority of them dispersed across Central Asia, Turkey, Saudi Arabia, Europe, Australia, Canada and the United States. Increasingly, the Uighur community in Washington, DC, led by Rebiya Kadeer, is speaking with a more unified voice. Following the example of the Tibetan Government in Exile, it has disavowed independence, supported greater autonomy and peaceful resolution of conflicts, and rejected violence and radical Islam.

After the riots in Tibet last year, the world is beginning to see that Xinjiang faces many problems related to sovereignty and Chinese rule, and that these problems have less to do with religious conflict than with social justice, ethnic relations, and equal opportunity. Given the ubiquity of the new media, it will be impossible to quarantine the ethnic pandemic spreading across China and indeed the world. News and popular expression have continued to Twitter out of China despite the government’s efforts to halt its spread. A remedy needs to be found not in shutting down these new media, but in addressing the complaints and general well-being of its populace.

Dru Gladney’s most recent book is Dislocating China: Muslims, Minorities, and other Subaltern Subjects. He is President of the Pacific Basin Institute at Pomona College. Rights: © Copyright 2009 Yale Center for the Study of Globalization. YaleGlobal Online