The troops of India and China are locked in a standoff in several areas along the Line of Actual Control in eastern Ladakh since May 5. The situation deteriorated last month following the Galwan Valley clashes that left 20 Indian Army personnel dead. 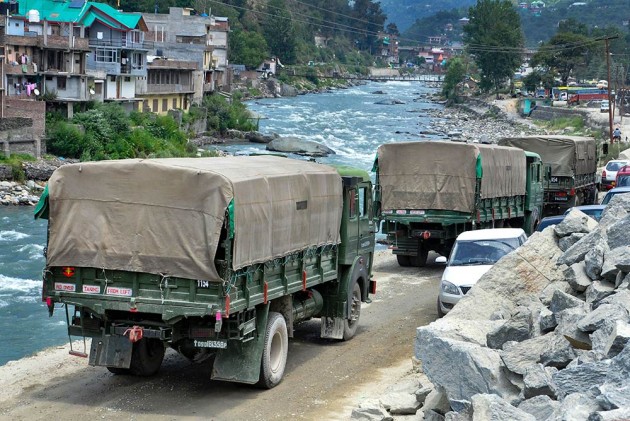 The US House of Representatives has passed a bipartisan legislation, urging China to peacefully de-escalate the situation with India along the Line of Actual Control.

The legislation on Tuesday came a day after the House unanimously passed an amendment to the National Defense Authorization Act (NDAA), slamming China's aggression against India in the Galwan Valley and its growing territorial assertiveness in and around disputed areas like the South China Sea.

The troops of India and China are locked in a standoff in several areas along the Line of Actual Control in eastern Ladakh since May 5. The situation deteriorated last month following the Galwan Valley clashes that left 20 Indian Army personnel dead.

The resolution, sponsored by Indian-American Congressman Raja Krishnamoorthi along with eight others, was passed by the House along with National Defense Authorization Act (NDAA) for the fiscal year 2021 and condemned Chinese aggression towards India along the Line of Actual Control.

“Through the passage of today's bill, the House has sent a clear, bipartisan message that the government of the People's Republic of China must peacefully de-escalate the situation along the Line of Actual Control with India,” Krishnamoorthi said in a statement.

“China's military provocations of India are unacceptable, and the peaceful resolution of their border standoff will help restore greater security to the Indo-Pacific region,” he said.

Through this vote, the US House of Representatives has reaffirmed the readiness of the US to stand with its allies and partners like India against Chinese military aggression, Krishnamoorthi said.

In the months leading up to June 15, along the Line of Actual Control, the Chinese military reportedly amassed 5,000 soldiers; and is trying to redraw long-standing settled boundaries through the use of force and aggression, the Congressional resolution says.

Noting that India and China have reached an agreement to de-escalate and disengage along the Line of Actual Control, the resolution says that on June 15, at least 20 Indian soldiers and an unconfirmed number of Chinese soldiers were killed in skirmishes following a weeks-long standoff in Eastern Ladakh, which is the de facto border between the two countries.

“The Government of the People's Republic of China should work toward de-escalating the situation along the Line of Actual Control with India through existing diplomatic mechanisms and not through force,” it said.

It is the sense of the Congress that there is significant concern about the continued military aggression by China along its border with India and in other parts of the world, including with Bhutan, in the South China Sea, and with the Senkaku Islands, as their aggressive posture towards Hong Kong and Taiwan.

China claims almost all of the South China Sea as its sovereign territory. China has been building military bases on artificial islands in the region also claimed by Brunei, Malaysia, the Philippines, Taiwan and Vietnam.

China has impeded commercial activity like fishing or mineral exploration by countries like Vietnam and the Philippines.

Ties between China and Japan have been strained by a territorial row over a group of islands in the East China Sea, known as the Senkaku islands in Japan and the Diaoyu islands in China.

A day earlier, the House had passed a similar NDAA amendment moved by Congressman Steve Chabot and Indian-American lawmaker Ami Bera which said that India and China should work towards de-escalating the situation along the LAC and also expressed concern about Chinese aggression in an around disputed territories like the South China Sea.

The resolution comes days after the House of Representatives Caucus on India and Indian-Americans in a letter to India's Ambassador to the US, Taranjit Singh Sandhu, said that over the last few months, the Chinese authorities have been acting with impunity and have attempted to transgress on the LAC, which resulted in diplomatic discussions to implement a process for de-escalation along the LAC on July 6.

It was led by Congressmen Holding and Brad Sherman and signed by seven other lawmakers.