Seven days from now, we are going to win this state and we are going for more incredible years in the White House: Donald Trump 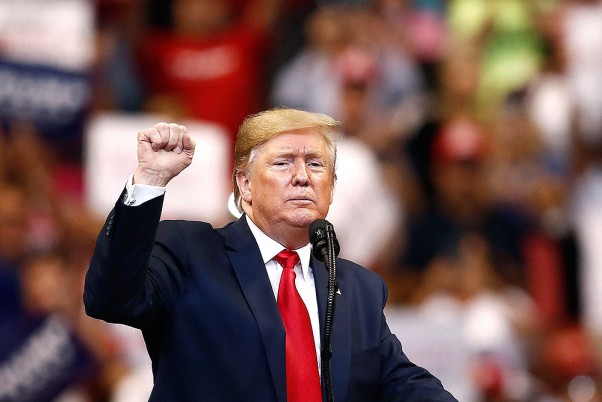 US President Donald Trump has said that the 2020 presidential election is a choice between a "super" economic recovery led by his administration or a "Biden depression" as he targeted his Democratic challenger Joe Biden.

With just seven days left for the most crucial American presidential election in recent memory, Trump intensified his campaign by having as many as three rallies on Tuesday, with one of them being in rain and freezing cold.

“Seven days from now, we are going to win this state and we are going for more incredible years in the White House,” Trump said in identical speeches in three battleground states of Michigan, Wisconsin and Nebraska.

“This election is a choice between a Trump super recovery or a Biden depression. That's what you are going to have with the raise of taxes, the biggest tax increase in our history. It's ridiculous. It's a choice between a Trump boom or a Biden lockdown. Let's lock it all down and by the way speaking of lockdowns, let's get your governor to open it up. Let's get them to open it up,” Trump said.

Seeking his second four-year term, Trump is currently trailing in latest polls against Biden. However, Trump looked confident of his electoral victory on November 3, asserting that he is experiencing a wave-like situation across the country.

“We have a campaign that's actually more enthusiastic and I would say that had to be number one in history four years ago but you know what this is going to be the most important election in the history of our country because you see what is happening. The radical left and you are going to defeat Biden and dark money donors and corrupt special interest.

“On Tuesday, you're going to see a red wave like they've never seen before and they saw a very big one. I will tell you what they got a glimpse of four years ago... they said where did these people come from?” said the president.

They are great Americans, they do not want anything but a level-playing field and they came out and voted... This is going to be bigger and they know it. They see what is happening, he said, adding that one of the most important issues in the election is law and order.

In all the three rallies, Trump made fun of Biden at times, saying that he is weak, and does not want to be the president.

“Biden is soft and weak and too scared to be pres(ident) -- he doesn't want to be president, let's face it. You know, you got his bad body language… That's a lot of bad body language from Joe,” Trump said amidst applause from his thousands of supporters who chanted ‘Four More Years’ and ‘We Love You’.

At all the three rallies, Trump showed clips from Biden’s past speeches and interviews in which he is seen to be contradicting his own speeches and views on issues like oil, fracking, taxes and China.

In Nebraska, Trump said that Biden has pledged the biggest tax hike in the history of the country. On the other hand, he said that he has given working families record-setting tax cuts. “And in my second term, I will cut middle-class taxes very substantially more,” he said.

“I will deliver record prosperity, epic job growth, and a safe vaccine that eradicates the virus and quickly ends the pandemic, and we are making that final turn. They don't want to hear it. We are making that turn. We're going to have a vaccine anyway. With or without it, we are making the turn. Normal life will fully resume; that's all we want. We want a normal life.

“We want normal life, the next year will be the greatest economic year in the history of our country. That's where we are headed… Biden doesn't even respect you enough to campaign,” he said.

“The business partner made clear that Biden's denial of involvement in his son's corrupt business dealings was a blatant lie with proof. He stated with firsthand knowledge that vice president Biden was directly and personally involved in establishing corrupt business dealings with China and getting money for it. This all happened at the same time as Biden was letting China steal American jobs and plunder American wealth. You saw that for eight years.

“If Biden wins, China wins and China will own the USA. If Biden wins, he will do bad things. By the way, he's not a good guy, just so you understand,” he told his supporters.

In Omaha, Nebraska, Trump said: “I’m standing here freezing. I ask you one little favour: get the hell out and vote”.

In Lansing, Michigan, light rain fell on a large uncovered crowd. Many of them said they had been waiting for five hours.