Passengers recounted a terrifying ordeal that began to unfold shortly after the plane full of vacationers took off. 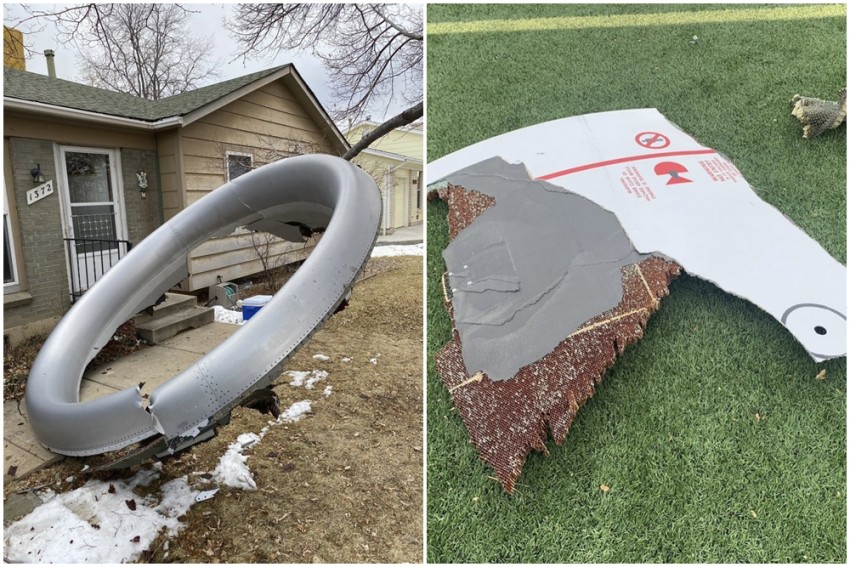 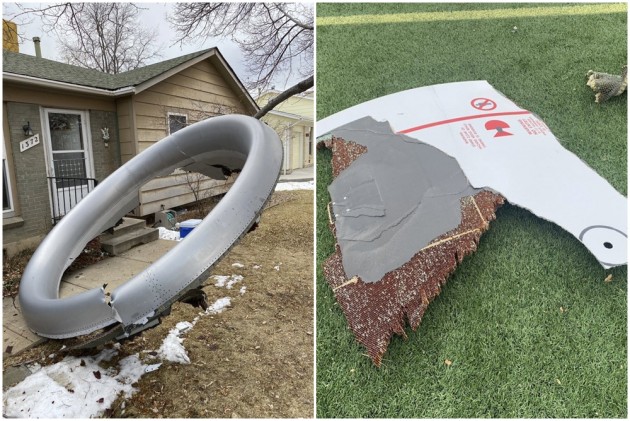 Debris from a United Airlines plane fell onto Denver suburbs during an emergency landing Sunday after one of its engines suffered a catastrophic failure and rained pieces of the engine casing on a neighborhood where it narrowly missed a home.

The plane landed safely, and nobody aboard or on the ground was reported hurt, authorities said.

The Federal Aviation Administration said in a statement that the Boeing 777-200 returned to the Denver International Airport after experiencing a right-engine failure shortly after takeoff. Flight 328 was flying from Denver to Honolulu when the incident occurred, the agency said.

United said in a separate statement that there were 231 passengers and 10 crew on board. All passengers were to be rebooked on a new flight to Hawaii, the airline said. 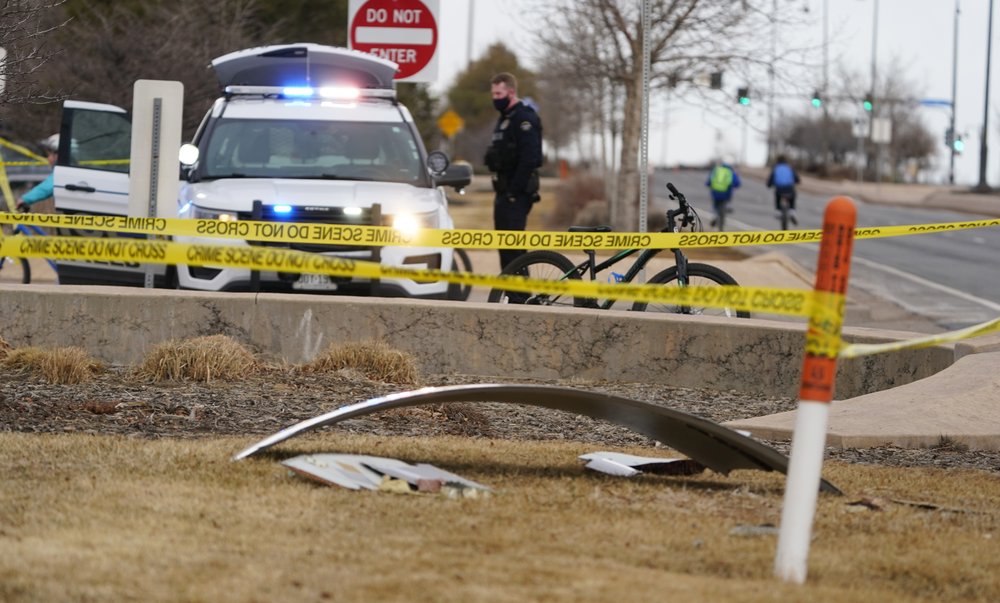 A piece of debris from a commercial airplane is marked off by police tape where it landed along Midway Boulevard in Broomfield, Colo., as the plane shed parts while making an emergency landing at nearby Denver International Airport Saturday, Feb. 20, 2021. Credits: AP

The Broomfield Police Department posted photos on Twitter showing large, circular pieces of debris leaning against a house in the suburb about 25 miles (40 kilometers) north of Denver. Police are asking that anyone injured come forward.

Passengers recounted a terrifying ordeal that began to unfold shortly after the plane full of vacationers took off.

The aircraft was almost at cruising altitude and the captain was giving an announcement over the intercom when a large explosion rocked the cabin, accompanied by a bright flash.

“The plane started shaking violently, and we lost altitude and we started going down,” said David Delucia, who was sitting directly across the aisle from the side with the failed engine. “When it initially happened, I thought we were done. I thought we were going down."

Delucia and his wife took their wallets containing their driver's licenses and put them in their pockets so that “in case we did go down, we could be ID'd," said Delucia, who was still shaken up as he waited to board another flight for Honolulu. 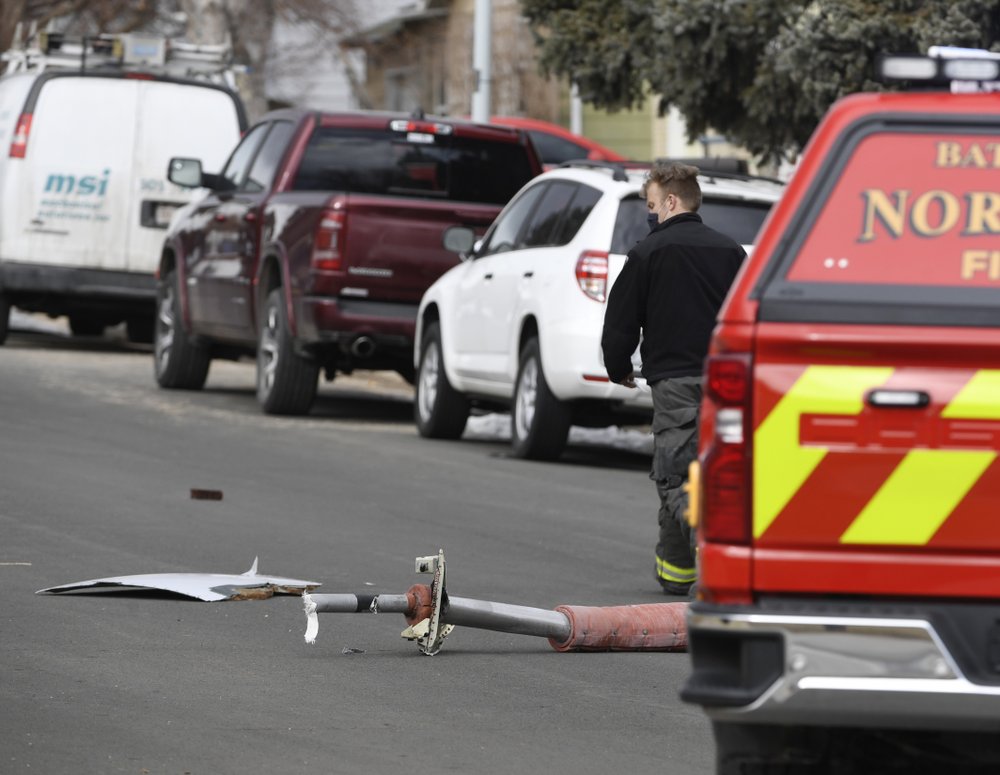 A North Metro firefighter walks past airplane debris on Elmwood St. near E. 13th Avenue, Saturday, Feb. 20, 2021, in Broomfield, Colo. Debris from a United Airlines plane fell onto Denver suburbs during an emergency landing Saturday after one of its engines suffered a catastrophic failure and rained pieces of the engine casing on a neighborhood where it narrowly missed a home. Credits: AP

On the ground, witnesses also heard the explosion and were scared for those on board.

Tyler Thal, who lives in the area, told The Associated Press that he was out for a walk with his family when he noticed a large commercial plane flying unusually low and took out his phone to film it.

“While I was looking at it, I saw an explosion and then the cloud of smoke and some debris falling from it. It was just like a speck in the sky, and as I'm watching that, I'm telling my family what I just saw and then we heard the explosion,” he said in a phone interview. “The plane just kind of continued on, and we didn't see it after that.”

Thal was relieved to learn no one was injured or killed from what he saw.

Video posted on Twitter showed the engine fully engulfed in flames as the plane flew through the air.

Kirby Klements was inside with his wife when they heard a huge booming sound, he said. A few seconds later, the couple saw a massive piece of debris fly past their window and into the bed of Klements' truck, crushing the cab and pushing the vehicle into the dirt. 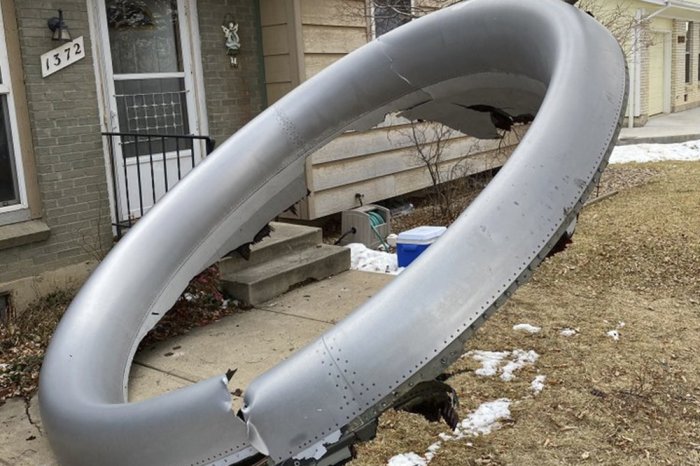 This photo released by Broomfield Police Department on Twitter shows debris from a commercial airliner that narrowly missed a home as it fell onto Denver suburbs during an emergency landing Saturday, Feb. 20, 2021, in Broomfield, Colo. Credits: AP

He estimated the circular engine cowling at 15 feet (4.5 meters) in diameter. Fine pieces of the fiberglass insulation used in the airplane engine fell from the sky “like ash” for about 10 minutes, he said, and several large chunks of insulation landed in his backyard.

“If it had been 10 feet different, it would have landed right on top of the house,” he said in a phone interview with the AP. “And if anyone had been in the truck, they would have been dead.” The National Transportation Safety Board is investigating.

“That unbalanced disk has a lot of force in it, and it's spinning at several thousand rotations per minute ... and when you have that much centrifugal force, it has to go somewhere,” he said in a phone interview.

Pilots practice how to deal with such an event frequently and would have immediately shut off anything flammable in the engine, including fuel and hydraulic fluid, using a single switch, Cox said.

Former NTSB Chairman Jim Hall called the incident another example of “cracks in our culture in aviation safety (that) need to be addressed.

Hall, who was on the board from 1994 to 2001, has criticized the FAA over the past decade as “drifting toward letting the manufacturers provide the aviation oversight that the public was paying for.” That goes especially for Boeing, he said.

Despite the scary appearance of a flaming engine, most such incidents don't result in loss of life, Cox said.

The last fatality on a U.S. airline flight involved such an engine failure on a Southwest Airlines flight from New York to Dallas in April 2018. A passenger was killed when the engine disintegrated more than 30,000 feet above Pennsylvania and debris struck the plane, breaking the window next to her seat. She was forced halfway out the window before other passengers pulled her back inside.

In that case, the breakdown was blamed on a broken fan blade in an engine of the Boeing 737. The Federal Aviation Administration ordered airlines to step up inspections of fan blades on certain engines made by CFM International, a joint venture of General Electric and France's Safran S.A.