A string of powerful blasts ripped through three churches and as many luxury hotels frequented by foreigners in Sri Lanka on Easter Sunday, killing 321 people and injuring more than 500 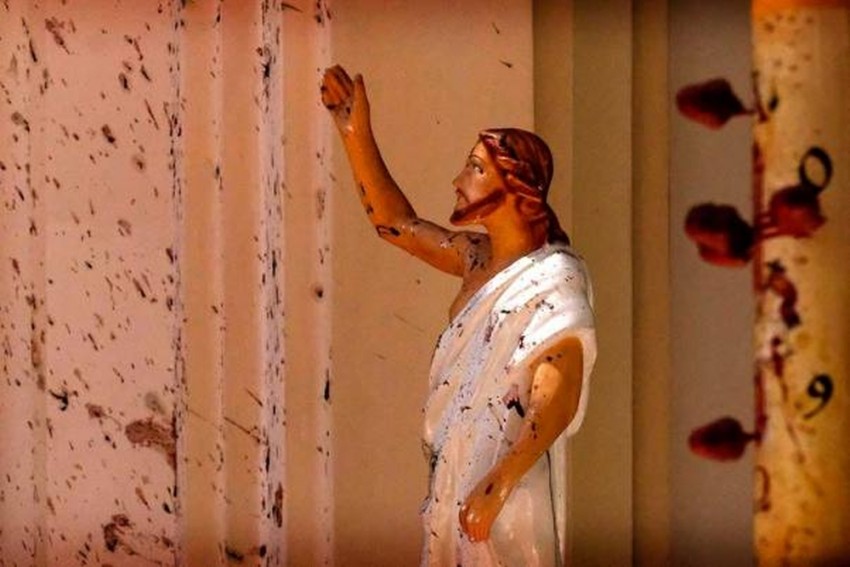 Blood stains are seen on the wall and on a Jesus Christ statue at the St. Sebastian's Church after blast in Negombo, north of Colombo, Sri Lanka
AP Photo
Outlook Web Bureau 2019-04-23T14:21:34+05:30 Sri Lanka Blasts In Revenge For Christchurch Attack, Says Minister; Motion To Ban Burqa Introduced In Parliament 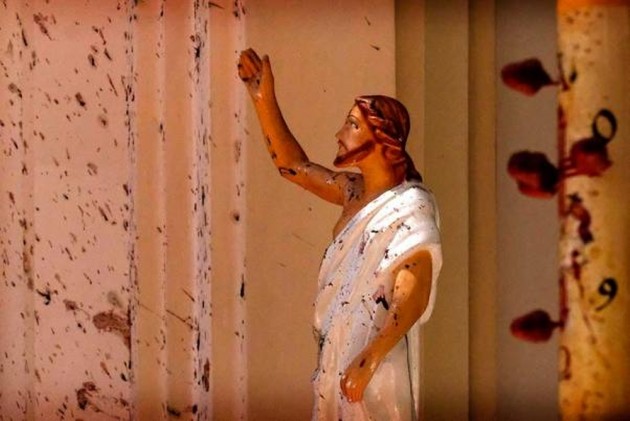 The terror bombings on Easter Sunday in Sri Lanka were in retaliation for the mosque attacks in Christchurch, New Zealand, a minister said on Tuesday, even as a motion has been introduced in Parliament to ban the burqua for national security.

A string of powerful blasts ripped through three churches and as many luxury hotels frequented by foreigners in Sri Lanka on Sunday, killing 321 people and injuring more than 500 others, shattering a decade of peace in the country following the end of the brutal civil war with the LTTE.

Wijewardene said that the early findings of the  probe found that the suicide bombings were in revenge for the deadly shootings at two mosques in Christchurch on March 15, during Friday prayers,  which left 50 people dead.

Wijewardene said of the 500 injured,  375 are still being treated in hospital.  38 foreigners are among those killed.

Meanwhile, a Private Members’ Motion has been submitted to Parliament by Member of Parliament Prof. Ashu Marasinghe to ban the burqa in Sri Lanka for national security.

In the motion Marasinghe states that the ban should be imposed as the burqa is not a part of traditional Muslim attire and is used around the world to carry out acts of terrorism, themorning.lk reported.

The interrogation of suspects and other evidence has pointed to the involvement of a large number of women in Easter Sunday attacks, according to dailymirror.lk.

The daily, quoting highly placed official sources, said the government is planning to implement the burqa ban in consultation with the mosque authorities. On Monday, several ministers had spoken to President Maithripala Sirisena on the matter.

It has been pointed out that burqa and niqab were never part of the traditional attire of Muslim women in Sri Lanka until the Gulf war in the early 1990s which saw extremist elements introducing the garb to Muslim women.

Defence sources had revealed that a number of female accomplices of the incidents in Dematagoda  had escaped wearing burqas.

In another development, an  improvised explosive device was detected inside a vehicle near the St. Anthony’s Church, Jampettah Road, Kochchikade, and was disposed in controlled explosion at site by the Bomb Disposal Unit today.

Prime Minister Ranil Wickremesinghe, making a special statement in parliament,  said the government would eradicate terrorism with the assistance offered by the international community.

He said the country has been offered assistance by many countries and international organisations including the UN to combat terrorism.

“We should seize this opportunity and utilise international assistance to eradicate terrorism,” he said.