Home  »  Website  »  International  »  'Sit Back, Behave, Wash Hands And Be Proud Of Your Country': Trump Advises Kids In US

'Sit Back, Behave, Wash Hands And Be Proud Of Your Country': Trump Advises Kids In US 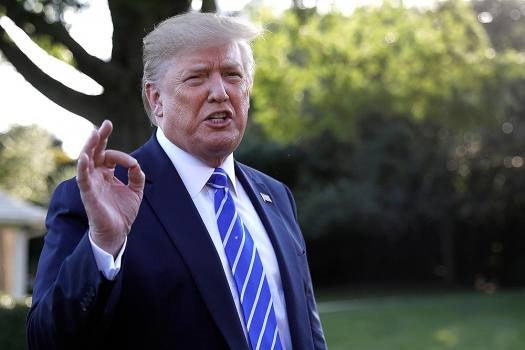 or millions of American kids staying indoors with their parents due to coronavirus shutdown in the US, President Donald Trump has a word of advice: sit back, behave, wash your hands and be proudof your country.

Much of life in America, and across the globe, has ground to a near halt as the coronavirus pandemic spreads, resulting in closing of schools, thwarting travel, forcing employees to work from home and shutting institutions.

The authorities now believe that the rapidly-spreading disease could fundamentally upend life for months.

Speaking to reporters on Friday, President Trump was asked what would he say to millions of school kids across the county who are staying at home.

"I would say that they have a duty to sit back, watch, behave, wash their hands, stay in the apartment with mom and dad," Trump told reporters at a White House news conference.

Many of them are bored, restless, learning a little bit online, but it is better in the classroom. You know that, a journalist asked Trump.

"I would say that you are a citizen of the greatest country anywhere in the world and we were attacked like nothing that's happened possibly since 1917.

"Many, many years ago. We were attacked and we are winning the battle and we're going to win the war and it's not going to take, hopefully, not that much longer. But we have to win the war," Trumpresponded.

The kids should just sit back and be very proud of the country, the president said.

Referring to his Friday conversation with Chinese President Xi Jinping, he said both the leaders agreed that the young people were attacked to a much lesser extent by this pandemic.

He said he was happy that the immune system of youngsters was stronger.

"But they have been attacked. For instance, the Spanish flu and if you look at the H1N1, the spine if you take a look at the swine flu, which was, as you know, not so long ago, that attacked very
strongly young children, kids, middle-aged people, everyone. Age is a factor here. So your children should be in good shape. Just tell them to be very proud of the country," Trump said.

The novel coronavirus, that first originated in wuhan in December, has wreaked havoc across the globe, upending life and businesses.