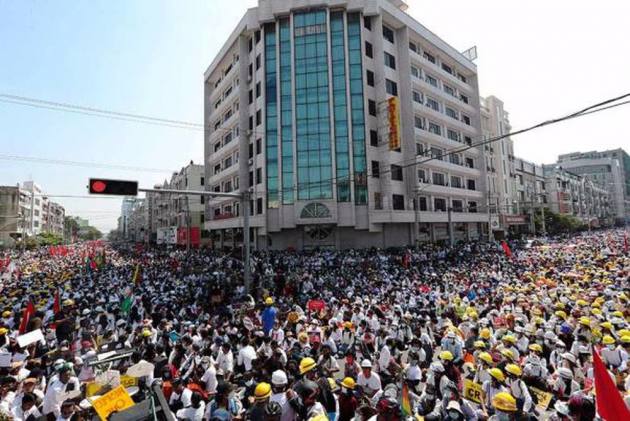 Police fired tear gas and water cannons and there were reports of gunfire Sunday in Myanmar's largest city where another anti-coup protest was underway with scores of students and other demonstrators hauled away in police trucks.

The violence erupted early morning when medical students were marching in Yangon's streets near the Hledan Center intersection, which has become the gathering point for protesters who then fan out to other parts of the city.

Footage showed protesters running away from police as they charged at them, and residents setting up makeshift roadblocks to slow their advance. Nearby, residents were pleading with police to release those they picked up from the street and shoved into police trucks to be taken away.

There was no immediate word on casualties. Sounds of gunfire could be heard and what appeared to be smoke grenades thrown into the crowds.

Myanmar's crisis took a dramatic turn on the international stage over the weekend at a special session of the United Nations General Assembly when the country's UN ambassador declared his loyalty to the ousted civilian government of Aung San Suu Kyi and called on the world to pressure the military to cede power.

Ambassador Kyaw Moe Tun declared in an emotional speech to fellow delegates Friday that he represented Suu Kyi's “civilian government elected by the people” and supported the fight against military rule.

MRTV, a Myanmar state-run television channel, broadcast an announcement Saturday from the Foreign Ministry that the ambassador was fired because he had abused his power and misbehaved by failing to follow the instructions of the government and betraying it.

Kyaw Moe Tun had urged all countries to issue public statements strongly condemning the coup, and to refuse to recognize the military regime. He also called for stronger international measures to stop violence by security forces against peaceful demonstrators.

There were arrests Saturday in Myanmar's two biggest cities, Yangon and Mandalay, where demonstrators have been hitting the streets daily to peacefully demand the restoration of the government of Suu Kyi, whose National League for Democracy party won a landslide election victory in November.

Police in Dawei, in the southeast, and Monywa, 135 kilometers (85 miles) northwest of Mandalay, also used force against protesters. Both cities, with populations of less then 200,000 each, have been seeing large demonstrations.

Nearly 800 people have been reported arrested since the coup.

The junta said it took power because last year's polls were marred by massive irregularities. The election commission before the military seized power coup had refuted the allegation of widespread fraud. The junta dismissed the old commission's members and appointed new ones, who on Friday annulled the election results.