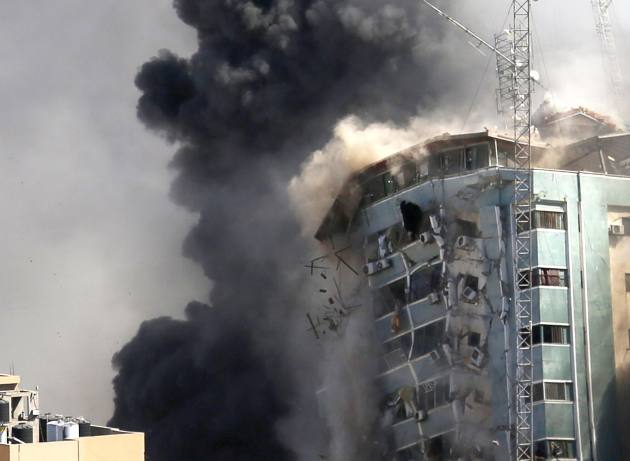 Hundreds of Hamas-backed activists launched what they said was the first in a series of nighttime protests along the Israeli border, throwing explosives toward Israeli forces who responded with live fire.

Organisers said the gatherings, which are to continue throughout the week, were meant to step up pressure on Israel to ease a crippling economic blockade on the Gaza Strip.

“The occupation will not enjoy calm unless the siege on our beloved land is lifted,” said Abu Omar, a spokesman for the protesters.

Israel and Egypt have maintained the blockade since Hamas, a group sworn to Israel's destruction, seized control of Gaza in 2007, a year after it won Palestinian elections.

The blockade, which restricts the movement of goods and people in and out of Gaza, has ravaged the territory's economy. Israel has tightened the closure since an 11-day war in May, demanding the return of the remains of two dead soldiers and freedom for two Israeli civilians believed to be in Hamas captivity.

Amateur footage and photos from inside Gaza showed hundreds of Palestinians protesters engaged in Saturday's gathering. Some appeared to be throwing explosives and chanting in celebrations as blasts sounded.

The Israeli military said troops responded to the explosives by firing live rounds toward the protesters. It said there were no injuries on the Israeli side.

Another Palestinian man, identified as a member of Hamas' military wing, was also killed in that protest, while an Israeli soldier was shot in the head from point-blank range by a protester. The soldier remains in critical condition.

Israel and Hamas are bitter enemies that have fought four wars and numerous skirmishes since 2007. Israel says the closure is necessary to prevent Hamas from gathering arms while critics say the blockade amounts to collective punishment.

Egypt has been trying to mediate a longer-term cease-fire that would ease the blockade and appeared to be making progress last week when it pressured Hamas to restrain a border protest on Wednesday.

The following day, Israel said it was easing some of the commercial restrictions on Gaza, allowing vehicles, goods and equipment for rebuilding projects to enter the Palestinian enclave. Israel said the easing could expand further if things remain quiet.

The Israeli government reached an agreement with Qatar on August 19 allowing the Gulf country to resume aid payments to families in Gaza, a move aimed at reducing tensions with Hamas. Israel suspended aid payments in May, saying the move was necessary to ensure Hamas did not benefit from cash injections.

At least 260 Palestinians were killed during May's Gaza-Israel war, including 67 children and 39 women, according to the Gaza health ministry. Hamas has acknowledged the deaths of 80 militants. Twelve civilians, including two children, were killed in Israel, along with one soldier.