Demonstrate Independence From China Or Face Permanent Funding Freeze: Trump To WHO

Trump said if WHO does not demonstrate major improvements within 30 days he will make the temporary freeze of US funding to the organisation permanent and reconsider the country's membership. 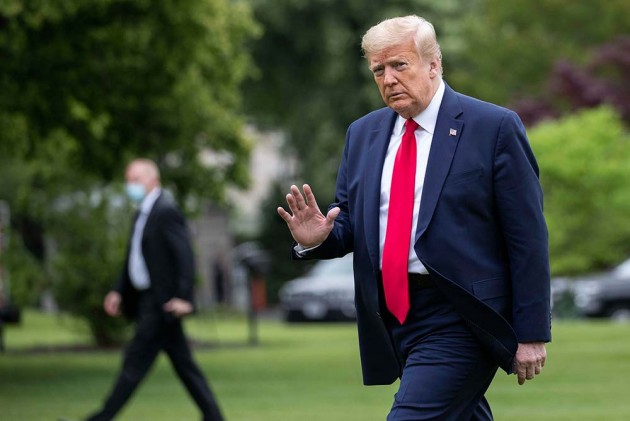 US President Donald Trump has warned the WHO that he would reconsider America's membership in the UN health body and "permanently freeze" the funding to it if it does not demonstrate its "independence" from China in the next 30 days.

On April 14, President Trump halted America's funding of up to USD 500 million annually to the World Health Organisation while a review is being done to assess its role in "severely mismanaging and covering up" the spread of the deadly coronavirus when it first emerged in the central Chinese city of Wuhan.

In a four-page letter to WHO Director-General Dr Tedros Adhanom, Trump said, "It is clear the repeated missteps by you and your organisation in responding to the pandemic have been extremely costly for the world. The only way forward for the WHO is if it can actually demonstrate independence from China."

“My administration has already started discussions with you on how to reform the organisation. But action is needed quickly. We do not have time to waste,” he wrote in his letter, which he tweeted on Monday night.

“That is why it is my duty, as President of the United States, to inform you that, if the WHO does not commit to major substantive improvements within the next 30 days, I will make my temporary freeze of United States funding to the WHO permanent and reconsider our membership in the organisation,” Trump said.

"I cannot allow American taxpayer dollars to continue to finance an organisation that, in its present state, is so clearly not serving America's interests,” he added.

In his letter dated May 18, Trump alleged that the WHO has failed to publicly call on China to allow for an independent investigation into the origins of the virus, despite the recent endorsement for doing so by its own Emergency Committee.

On Monday, Chinese President Xi Jinping dispelled the criticism of secrecy and cover-up, saying "all along, we have acted with openness, transparency and responsibility. We have provided information to WHO and relevant countries in a most timely fashion”.

Trump has accused China of covering up, while Australia and the European Union have called for more transparency in China’s COVID-19 control efforts including an independent inquiry into the origins of the virus.

The WHO's failure to do so has prompted its member states to adopt the "COVID-19 Response" Resolution at this year's World Health Assembly, which echoes the call by the US and so many others for an impartial, independent, and comprehensive review of how the WHO handled the crisis.

Last month, in response to President Trump's criticism, Ghebreyesus gave a strident defence of his agency's handling of the coronavirus pandemic and said that the COVID-19 pandemic should not be "politicised" as unity is the “only option” to defeat the disease.

The resolution also calls for an investigation into the origins of the virus, which is necessary for the world to understand how best to counter the disease, he wrote.

In 2003, in response to the outbreak of the Severe Acute Respiratory Syndrome (SARS) in China, Director­ General Harlem Brundtland boldly declared the WHO's first emergency travel advisory in 55 years, recommending against travel to and from the disease epicentre in southern China, he said.

“She also did not hesitate to criticise China for endangering global health by attempting to cover up the outbreak...,” the president said.

Trump alleged that the WHO has repeatedly made claims about the coronavirus that were either grossly inaccurate or misleading.

On January 14, the WHO gratuitously reaffirmed China's now-debunked claim that the coronavirus could not be transmitted between humans, stating: "Preliminary investigations conducted by the Chinese authorities have found no clear evidence of human-to-human transmission of the novel coronavirus (2019-nCov) identified in Wuhan, China." This assertion was in direct conflict with censored reports from Wuhan, he said.

“On January 28, after meeting with President Xi in Beijing, you praised the Chinese government for its "transparency" with respect to the coronavirus, announcing that China had set a "new standard for outbreak control" and "bought the world time."

"Even after you belatedly declared the outbreak a Public Health Emergency of International Concern on January 30, you failed to press China for the timely admittance of a WHO team of international medical experts,” Trump charged.

As a result, this critical team did not arrive in China until two weeks later, on February 16. And even then, the team was not allowed to visit Wuhan until the final days of their visit, he said.

Trump alleged that as of February 3, China was strongly pressuring countries to lift or forestall travel restrictions.

“This pressure campaign was bolstered by your incorrect statements on that day telling the world that the spread of the virus outside of China was "minimal and slow" and that "the chances of getting this going to anywhere outside China (were) very low," he said.

“By the time you finally declared the virus a pandemic on March 11, it had killed more than 4,000 people and infected more than 100,000 people in at least 114 countries around the world,” he said.

More than 300,000 people have died due to the coronavirus pandemic and over 4.8 million people infected around the world. The US is the worst-hit country with over 90,000 deaths and over 1.5 million confirmed COVID-19 cases, according to Johns Hopkins University.