The National Health Commission (NHC) said that 105 new coronavirus cases, including 102 domestically transmitted ones, were registered in the country on Wednesday, mainly in the Muslim Uygur majority Xinjiang province which reported a sudden spike in cases. 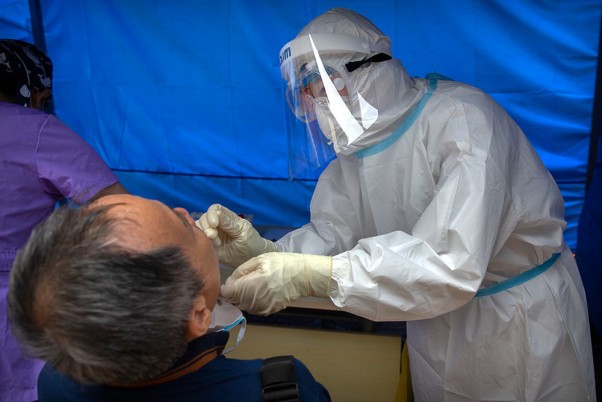 China's COVID-19 cases have crossed the 100-mark for the second consecutive day, belying the hopes that the country managed to contain the deadly contagion.

The National Health Commission (NHC) on Thursday said that 105 new coronavirus cases, including 102 domestically transmitted ones, were registered in the country on Wednesday, mainly in the Muslim Uygur majority Xinjiang province which reported a sudden spike in cases.

The NHC on Wednesday said that 102 cases were reported on Tuesday, crossing the 100 mark for the first time in three months after it was controlled in Wuhan where the virus first emerged in December last year, sparking fears of a second wave of the COVID-19 attack in the country.

It said on Thursday that 96 of the 102 domestically transmitted cases were reported in Xinjiang Uygur Autonomous Region, five in Liaoning province and one in Beijing municipality.

The commission said that 280 asymptomatic cases, including 90 from outside the mainland, were still under medical observation.

Asymptomatic patients, also known as silent spreaders, pose a problem as they are tested COVID-19 positive but develop no symptoms such as fever, cough or sore throat.

However, they pose a risk of spreading the disease to others.

No deaths related to the disease were reported on Wednesday.

As of Wednesday, the overall confirmed COVID-19 cases on the mainland has reached 84,165, including 574 patients who were still being treated, with 33 in severe condition.

Altogether 78,957 people have been discharged after recovery, and 4,634 died of the disease on the mainland, the commission said.

Provinces of Guangdong, Yunnan and Shaanxi each saw one new imported case on Wednesday.

India, China And Russia Don’t Take Care Of Their Air, US Does: Donald Trump