New Round Of Flooding In Belgium Causes Massive Damage 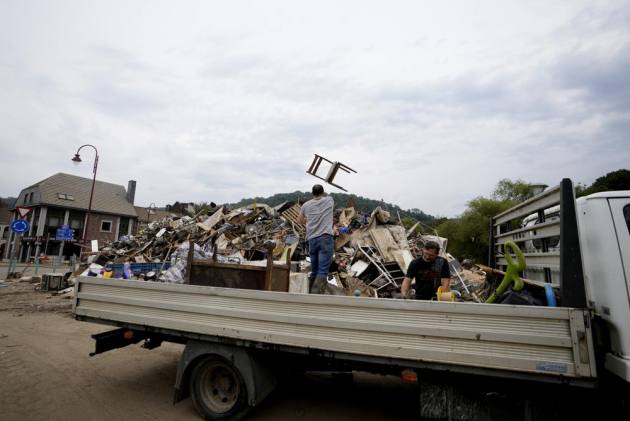 New floods have again swamped areas of Belgium and washed away cars as a wave of thunderstorms and heavy rain hit the country on Saturday.

The provinces of Namur and Walloon Brabant south-east of the capital city Brussels were particularly hit. They had already been impacted by the devastating floods that left 36 people dead and seven missings in the nation with 11.5 million inhabitants last week.

Belgium's crisis center issued a warning to the population as the bad weather is expected to last for several days.

Heavy rainfall caused significant damage in Dinant, where piles of cars were strewn across the town. Deputy mayor Robert Closset said firefighter were deployed to tackle floods he described as worse than last week.

“I've been living here all my life and I've never seen this before," he told The Associated Press, adding that no new victim had been reported.

In the province of Liege, which was badly hit last week, local authorities monitoring the situation said no significant overflows of rivers were expected over the weekend and decided that a global evacuation of the area was not necessary at this stage.

The confirmed death toll from last week's floods in Belgium and neighbouring countries passed 210 this week and the economic cost is expected to run into the billions.

The Walloon government, in charge of the executive power in the French-speaking region, has announced a €2 billion plan for the reconstruction.

To help citizens cope with the urgency before insurance companies take over, every household affected by the catastrophe will be granted interest-free loans of 2,500 euros to cover basic needs.

Experts say such floods will become more frequent and severe due to climate change, and countries will need to adapt, including by revising calculations about future flood risks, improving warning systems, and preparing populations for similar disasters.