Afghan Students In India Stuck In Limbo After Taliban Takeover

Students from Afghanistan living in India face a difficult choice: Go back home to Taliban rule or stay abroad and leave their families behind. And with their funds drying up, many are struggling to make ends meet. 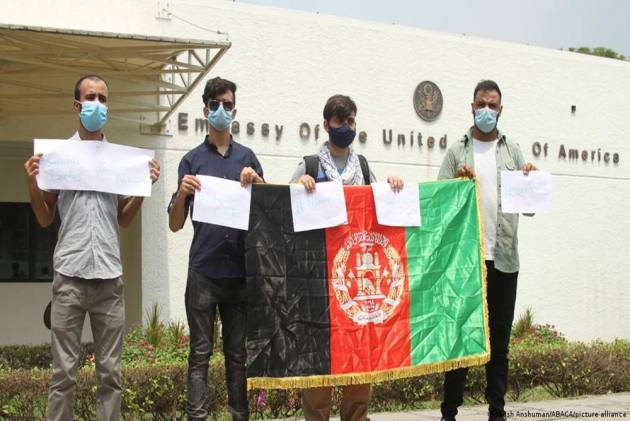 Farzana Amiri had her plans all mapped out in a thick diary. She would finish her degree in international business at an Indian university by next year, return to Afghanistan, and start a venture of her own.

But about a month ago, the 20-year-old student watched in horror as the Taliban rapidly gained territory in Afghanistan, wresting control of one district after another.

Finally, the fall of Kabul on August 15 buried Amiri's hopes and dreams, along with those of tens of thousands of young Afghans who face an uncertain future under Taliban rule.

Afghans abroad fear for their families

She is one of the estimated 14,000 Afghan students in India who must decide whether to return to Afghanistan and live under the Taliban regime, or start life anew in a foreign country, leaving their families behind.

In 2019, Amiri traveled from the Afghan province of Maidan Wardak to study at a university in the western Indian city of Pune.

Amiri's most immediate concern was getting her family out of Afghanistan.

"My father's life is at risk. He ran a government school in Wardak and still currently living there," she told DW.

As the eldest of her eight siblings, Amiri was the first female in her community to go abroad for her education. "It's a very big deal for my family," she said.

"I'm worried about what will happen if the Taliban find out that my father worked with the Afghan government and sent his daughter to study abroad," she said.

"They're going door-to-door asking everyone about their neighbors — that's how the Taliban are hunting down people," she added.

She also worries about her mother and siblings who are in Kabul. "My youngest sister is just two-years old. What future will she have in Afghanistan?"

The last time the Taliban were in power was before Amiri was born. "I'm glad that I've never seen their [The Taliban's] faces," she said. "But I still worry about my country, my family, and my generation."

Making a new home in India?

Staying in India also comes with many challenges for young Afghans, including securing asylum or a residence permit.

"I feel very safe here so I just hope I can stay in India," Amiri said. "I'm going to try and remain in this country, and eventually do a master's degree here so that I can get a decent job."

Hasan Hamta, an MBA student at Bangalore University, faces a similar situation. He was a mathematics teacher at a private school in Kabul before he decided to come to India.

While the Taliban were marching into provincial capitals of Afghanistan, and ultimately Kabul, the 29-year old was preparing for his semester exams.

"I was unable to concentrate on my studies after reading the news coming out of Afghanistan," Hamta told DW.

"I came here for a better education so that I could go back and rebuild Afghanistan," he said. "But now, if I go back, I will be targeted and killed by the Taliban."

Hasan too is torn between fear of the Taliban and concern for his family back home in Kabul.

"In the current situation, I've been calling my family two or three times every day," he said. "When I speak to my family, they tell me, 'Hasan, don't come back to Afghanistan. The situation is very bad, and our lives are in danger.'"

Hamta also has a younger sister who teaches in Kabul but is now too scared to go to school. "All schools are shut. My sister is afraid that if she goes out, the Taliban will kill her," he said, adding that the situation in Afghanistan is particularly bad for young people.

"Sometimes, it feels like we have lost everything. We had a beautiful country and now it's been captured by the Taliban. We are broken now," Hamta added.

He has been in India for about two years, and his studies are nearing conclusion.

"My visa had been extended for six months, and now only four months remain. I don’t want to go back in this situation," he said.

After his exams, he plans to go to New Delhi and register for asylum in third countries.

Afghan students cut off from funds

In addition to the emotional turmoil, many Afghan students are facing financial troubles as well. While some are in India on scholarships, students who self-financed their education find themselves struggling to meet daily needs.

Following the Taliban's takeover, businesses and banks in Afghanistan have shut, leaving millions without jobs.

Financial stress is particularly affecting students who have depended on their families for their tuition fees, accommodation, and other expenses.

Several NGOs have reached out to Afghan students, offering aid and assistance. One of the organizations is Pune-based Sarhad.

Last week, the NGO set up a helpline for Afghan students and nationals in the western state of Maharashtra, the Indian Express newspaper reported.

Maharashtra hosts the second largest Afghan student population in India, after New Delhi.The helpline provided students with counseling along with assistance in making arrangements that would allow them to continue their education in India or contact their relatives in Afghanistan with the help of the central government.

Sarhad also said it would "adopt" 1,000 Afghan students until the situation in their country stabilized.

"While we have announced that we would be providing for the education, upkeep, and livelihoods of 1,000 students, the task of selecting students lies with the central government," NGO founder Sanja Nahar was quoted as saying by The Hindu newspaper.

He added that he had written to Prime Minister Narendra Modi seeking permission and cooperation to expedite aid, the newspaper said.