On a pitch easy neither for stroke-making nor for blasting out the opposition, the Anil Kumble-led Indian attack bundled out Lara's men for 215, a deficit of 373, forcing them to follow-on. 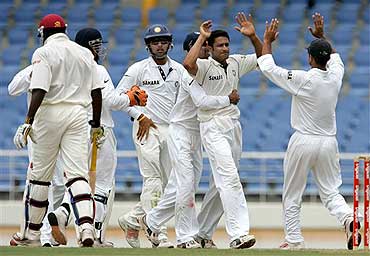 India were smelling blood after skittling out the West Indies for a modest total and amassing a huge first innings lead on the third day of the second Test on Monday.

The hosts cut a sorry figure as they were bundled out for 215, none of their batsmen crossed the half-century mark, to concede a potential match-winning lead of 373 runs at the Beasejour stadium.

Following on, Brian Lara's men were 43 for one in the second innings when bad light brought an early close to the proceedings.

Lara was holding fort on 15 and was accompanied by opener Daren Ganga on 24.

With two full days play left, only inclement weather and some special batting performance by Lara and Co. can save the match for the West Indies.

The first innings - which ended at the stroke of tea, lasting barely three sessions - would not inspire much faith in the home fans, though.

India's bowlers, however, deserved credit for the way they stuck to the task on a pitch which was easy neither for stroke-making nor for blasting out any opposition.

Anil Kumble (3-57) and Munaf Patel (3-51) were stand out performers with their accuracy and patience but the surprise package once again was Virender Sehwag (3-33).

Sehwag, who picked four wickets in the drawn first Test in Antigua, sliced through the tail to put a quick end to the lower order resistance.

Kumble started the rot in the afternoon after the sixth wicket pair of Dwayne Bravo (25) and Denesh Ramdin (30) had added 61 runs.

Bravo was induced into driving an edge into the hands of Rahul Dravid in the slips.

Close on the heels of this dismissal, Patel struck from the other end when Ramdin played a loose drive and edged a catch to wicketkeeper Mahendra Singh Dhoni.

Sehwag then rose to the occasion, performing the role of the fifth bowler with aplomb and claimed Jerome Taylor (23) and Pedro Collins (0) in his important spell after tea.

Taylor, playing aggressively, hoisted Sehwag for a six but then to fell to a catch at the deep square leg fence.

Collins became the ninth batsman to be dismissed, by Sehwag, when he played defensively and edged a catch to Dravid in the slips.

Sehwag then wrapped up the innings when he caught Ian Bradshaw (20) in his follow-through.

Both Gayle and Chanderpaul looked untroubled for the major part of first hour before both departed within four runs of each other.

Gayle, who had his moments of unease against Kumble, finally fell to the leg-spinner when he played back and edged a catch to the wicketkeeper.

Just before his dismissal, Gayle had been emboldened with a pulled six over mid-wicket and four byes that accrued in the same over.

Gayle in all batted for 107 balls and hit seven fours and a six.

But perhaps even more critical blow for the hosts was when Chanderpaul played across to Pathan and was ruled leg before wicket by umpire Asad Rauf - the fourth leg before decision of the innings.

Chanderpaul had done the bulk of scoring in the first hour before his dismissal plunged the West Indies to 106-5.

Chanderpaul in all batted for 79 balls for his 30 runs and hit three boundaries.