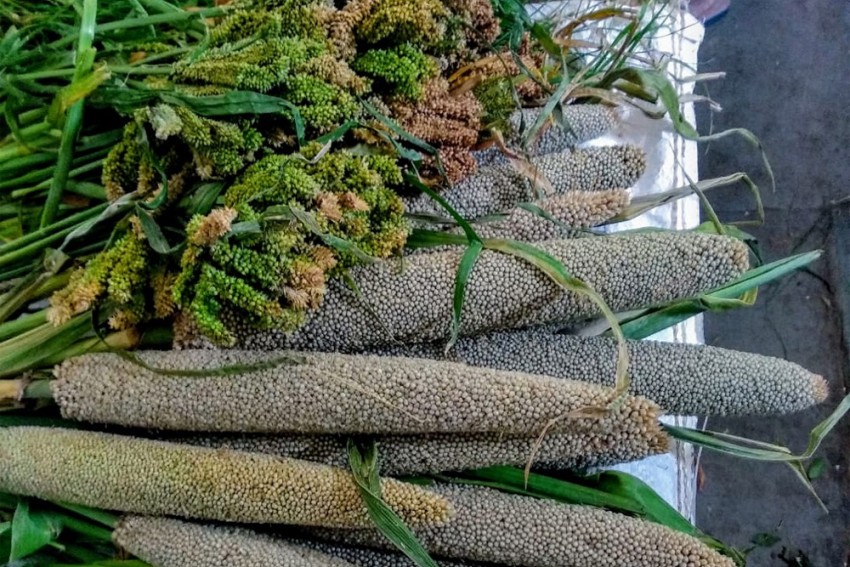 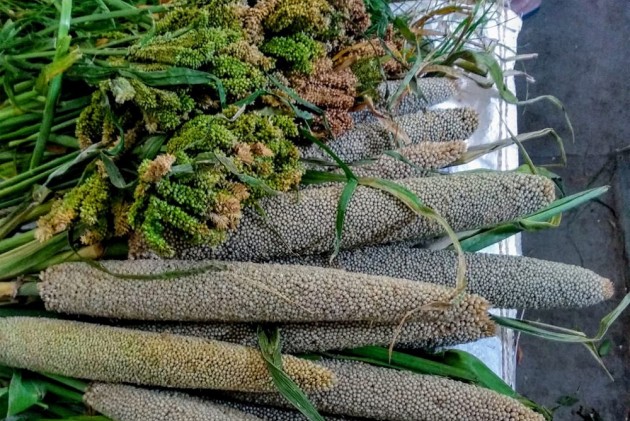 “Millets have been a part of the Indian diet for centuries and something our forefathers ate. Post-independence, the Green Revolution in the 60's popularised the production of wheat and rice and over the decades, millets have been grown lesser and lesser. Millets are called "super cereals" since they are rich in vit b, protein and fibre.”

What is a millet? It does not refer to a single grain, but range of grains bunched together under that general term millets to differentiate from the more familiar ones, like paddy or wheat. What is common to all millets are that they are hardy, usually rain-fed, and often grown as no-till crops. Traditionally, they are often grown as part of shifting cultivation practiced by the indigenous peoples. Even today indigenous peoples who lead a traditional lifestyle may grow 20-40 varieties of crops in just about an acre where half of them will be millets of various kinds. Today these crops are grown not only as part of shifting cultivation but still as hardy, mostly rain-fed crops. Though not all, several of them are dry land crops as well.

The Culture Of Growing Millets

Before we get to know what some of the more popular millets are or why they are considered healthy, it is essential to understand the cultural context of these grains. Humans while being hunter gatherers started practicing shifting cultivation centuries back. What they grew in these holdings nourished them by providing sources of carbohydrates, oil, fibres, and essential minerals. The grains they curated over time and grew, were a notch away from being wild – and held within them a high degree of genetic variations which allowed the crops to survive various environmental conditions and challenges, making them overall hardy, strong and resilient. These traits what made them strong also made them more nutritious as each grain contain a life-force that has grown naturally without the props of irrigation water, pesticide or other aids. These varieties or traits could continue to exist as seeds were saved, and sown over centuries. Debate arose over the benefits and adverse effects of shifting cultivation as land available to the indigenous peoples reduced, and the shifting cultivation cycles – i.e. time-gap between cultivations in a particular piece of land, reduced. As settled agriculture spread, it transitioned into cultivation of hybrid or ‘improved’ varieties of a handful of grains – that needed inputs like irrigation, fertilizers, pesticides etc. Simultaneously, efforts were made to wean people away from shifting cultivation practices as some believe that they have adverse effects on conservation of natural biota. However, some indigenous groups continued to practice shifting cultivation and grow among other things a wide range of grains or millets. Upon inquiring about the reason of their reluctance to stop such method of cultivation, one indigenous farmer from the Eastern Ghats had articulated this – several years back: ‘We, the tribal people, do not have scriptures, and structures that links us to our ancestors. We have our seeds – that are handed over to us from generations. They are our link to our ancestors, our history, and therefore our future’.

There are many types and varieties of millets. Some of them are listed here. To compare paddy and wheat are listed at the end: (Please see the bigger version in The Numbers section)

Even though paddy and wheat are mentioned in the table representing the crops that are most common - it is to note that there are several traditional paddy varieties still exist that are grown primarily as a rain-fed crops, then de-husked but not polished for consumption, are nutritionally closer to the millets.

Millets have always been part of mainstream culture too. Hence, we often see some types of millets are incorporated in our traditional festivals like harvest festivals, or like the recent one-Ganesh Chaturthi where in the south bajra (pearl millet), and ragi (finger millet) are part of essential offerings. While such symbolism exists barring exceptions, millets mostly came to be known as “cow-feed” to the mainstream population until more recently when the health benefits of these grain became known.

What And How To Eat

So, what makes them healthy – other than the nutritional properties listed in the table? It is important to explore this because it can help one make the right choice in accessing the nutrition and the health benefits that these grains offer. To understand we have to briefly delve into the strategies and structures of these grains. There are four primary components in the structure of a husked millet grain. As the diagrammatic representation shows, they are: the husk, bran, endosperm and the germ. 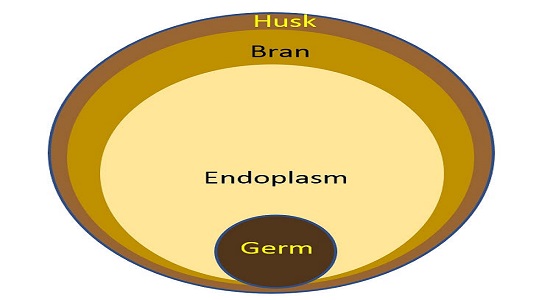 The husk shields the seed. The bran a layer provides the various nutrients needed for the fledgling seed to grow into a plant. The endosperm is the store house of energy and the germ being the tissue from which the seed germinates. So, in a field of the foxtail or kodo millet plants, only those that have sufficient protection for their seeds not to lose critical moisture to the dry winds, will survive a dry spell. This happens when the bran has the right mix of essential fatty acids working as a moisturiser. Additionally, it is the mineral and the salt in the bran that acts as a catalyst in the germination process as soon as the moisture is available. Finally, to keep all these together and to make them available at the right time, the fibre network in the bran becomes critical. It is therefore no wonder that unpolished grains where the bran layer is retained are both tasty and more nutritious to eat.

We have a range of millet products in the market, but we also have millet grains to make things like millet rice, khichdi/pongal, upma etc. We can mix several types of millets and even mix them with paddy to make rice or use a mixed-millet flours for various uses. These combinations make wonderful traditional Indian and international dishes such as tabbouleh or tabouli Salad with mixed millet rice instead of couscous, Job's Tears porridge, mixed-millet risotto are just a few examples. There is so much to explore and find out how to incorporate these grains in our diet as staples. When we purchase the unpolished grains to use as staples – we are not just using them as sources of carbohydrates but can access all the goodness of the entire grain including the resource-rich bran. Sure, we may like to eat or have the convenience of something like cornflakes in the morning or a bite of a cookie from time to time or have a craving for pasta. Nothing wrong in that. But if we think that just by choosing millet flakes, cookies, or snacks we are making a healthy choice, then it is time to think again. What we need to know is the percentage of millet used in such products – that are popped, flaked, baked, or otherwise processed and packaged. We may still want to eat them because we like them. However, it is good to be informed. The best way to consume millets is to purchase them as unpolished grains - and to incorporate them in our recipes to eat them as staples. If millets are grown in your region, may be make a trip to a local farm growing them. It is all part of knowing our food, eating smart and eating right.

Nina Sengupta is an ecologist with a doctorate in wildlife science. She lives in Auroville and works around the globe as an independent consultant, integrating biodiversity conservation and development options. She has worked in South and South-east Asia, Africa, Finland and the USA. She is passionate about food forest, food gardening and making the life sciences active andparticipatory for all. She has published a colouring book for adults, the first in India, on Edible Weeds

Dwiji Guru has a doctorate in Mechanical Engineering. He is an independent researcher, advocate and consultant for sustainable food systems with a focus on technology, and its politics. Based in Bengaluru, he works across India with social ventures to improve processing of produce from dry land farms. He is passionate about getting the right message out on how best to consume millets. He also maintains an online portal called The Millet Foundation.

With The Prime Minister’s Poshan Abhiyaan, As Nutrition Turned Into A Headline Issue, Outlook Picked Up The Scent Of The Story, Says Indranil Roy, Chief Executive Officer Of The Outlook Group