The build-up to the West Indies-India series was dominated by talks of a rift between Virat Kohli and Rohit Sharma, courtesy unwarranted social media posts and unconfirmed reports 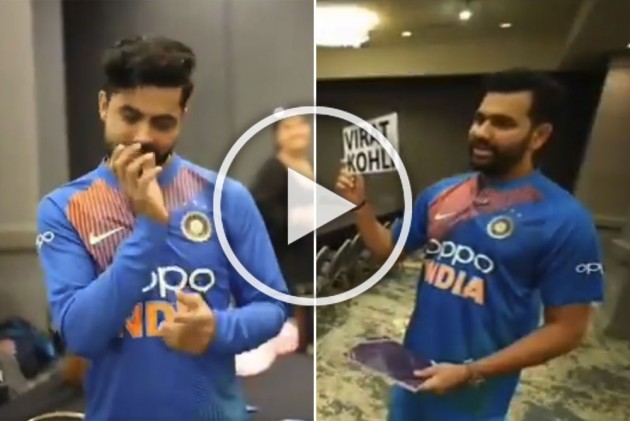 While the Indian cricket team was taking the field against the West Indies in the first T20I in Florida on Saturday, a video – featuring skipper Virat Kohli, his deputy Rohit Sharma and Ravindra Jadeja – did the rounds on social media to the delight of fans.

The emergence of the video, featuring both the protagonists and Jadeja, one of the most popular cricketers, indeed helped assuage the fear of rift. It sure looked like a deliberate act, following a pre-determined script with appropriate props. But the post from SPN-Sports, the official broadcasters of the West Indies-India series, was welcomed by fans.

In the video, Rohit and Jadeja play dumb charade with the later enacting on the vice-captain's cue. In one act, Rohit used a play card with Kohli's name on it. An impressed Kohli ended up blushing. And the caption read: "What do you think Ravindra Jadeja was trying to communicate with Rohit Sharma about Virat Kohli?"

What do you think Ravindra Jadeja was trying to communicate with Rohit Sharma about Virat Kohli? ðÂÂÂÂÂ¤ÂÂÂÂÂ
.
.
Let us know in our comments.
.
.
.#BlockbusterWeekend | #WIvIND | #SPNSports pic.twitter.com/TpRuLipKpF

The build-up to the series was dominated by talks of a rift between the skipper Virat Kohli and his deputy Rohit Sharma. Fuelled by unwarranted social media posts, rather activities from either camp and unconfirmed reports, the reported rift became a national concern which forced the Supreme Court-appointed Committee of Administrators to issue statements. Kohli also did his best to present a counter-narrative, but the skipper found himself feeding on the rumour mill by posting a 'squad' photo sans Rohit.

India registered a four-wicket win over the Windies to take a 1-0 lead in the three-match series.