Home  »  Website  »  International  » Opinion  »  Who's Winning The War On Terror?
View From pakistan

Who's Winning The War On Terror?

Two years after Sept. 11, the Taliban is thriving along the Pakistan-Afghanistan border. Like Osama bin Laden, in Afghanistan and Pakistan a victory over terrorism remains as elusive as ever. 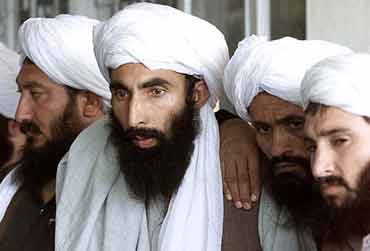 From the dusty bazaar of these border towns bristling with guns and jihadi fighters, the lightning victory achieved by the Americans in the wake of the September 11 attack two years ago seems like a distant past. It's as if September 11 never happened and the Taliban were never routed. In the last ten days of August, the Taliban, who were driven out of Kabul under withering US bombardment and ground assault, assembled some 1,000 troops in the two tribal provinces of Afghanistan to launch attacks on US and Afghan forces. A mix of Pashtun tribal passion and Islamic extremism, combined with political failure in Pakistan, lies behind the Taliban resurgence and explains why the American war on terror is faltering.

The war on terror has done little to address the issue of Pashtun desire for political autonomy. The Taliban's dramatic offensive in Afghanistan during the past few weeks has been fuelled by recruits, arms, money, and logistical support from Pakistan's two provinces of North West Frontier (NWFP) and Baluchistan, where Pashtun tribesmen and Islamic parties are sympathetic to the Taliban. Pakistan's Pashtuns find common ethnic and political cause with the Taliban, who are also largely Pashtun. Pashtuns on both sides of the border are bitterly opposed to the presence of US forces in Pakistan and Afghanistan. 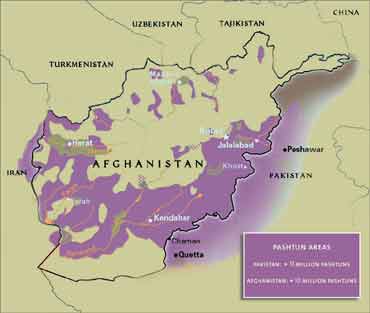 The sense of Pashtun brotherhood is even stronger in Pakistan's seven Federal Administered Tribal Agencies (FATA), which run north to south forming a 1,200-kilometer wedge between Afghanistan and the settled areas of NWFP. FATA are nominally under the control of Pakistan, but the tribes have been semi-autonomous since the British Raj. They have always carried arms and sold arms to everyone in the region, from Tamil Tigers and Kashmiri militants to the Taliban. These days the bazaars in FATA are filled with Taliban – both Afghan and Pakistani – looking to stock up before going into Afghanistan. ''The Taliban are clean, honest, believe in Islam, and will rout the Americans,'' says Shakirullah, a Mohmand shopkeeper. ''Anyone fighting the Americans is our friend,'' he adds.

The Mohmands are just one of dozens of major tribes that straddle the border, but their views are similar to most tribal Pashtuns. Isolated from mainstream Pakistan and the media, misinformation is rampant. After dozens of interviews it is apparent that most Mohmands refuse to accept that Al' Qaeda carried out the attacks of September 11, believing instead that they were perpetrated by ''the CIA and Jews.'' Most Mohmands also believe that the Americans and, in particular, President George Bush, hate the Pashtuns.

After the defeat of the Taliban in Afghanistan, the Pakistan army entered FATA agencies one by one at the request of US forces, who are patrolling the Afghan side of the border looking for Al'Qaeda militants. In August, at the behest of the Americans, thousands of Pakistani troops occupied the Mohmand Agency for the first time. But the army has been unable to stop the flow of guns and fighters to the Taliban. For the first time since their defeat nearly two years ago, the Taliban battling US and Afghan government troops in southern Afghanistan are not retreating under withering air bombardment by the Americans. Instead, they are standing their ground and bringing in more recruits from Pakistan, while at the same time trying to open up other fronts in eastern Afghanistan to broaden the attack against US forces.

The Taliban are now striking at Afghan and US positions all along the Pakistan-Afghanistan border. Just last weekend they launched an audacious attack a few miles outside Kabul. The Taliban aim is to humble the Americans and the government led by Afghan President Hamid Karzai and delay the political process – including the adoption of a new Constitution this December and general elections next June – all the while preventing reconstruction by aid agencies and ensuring that instability remains.

The Pakistani army's actions in FATA are designed to apprehend Taliban and Al' Qaeda leaders such as Osama Bin Laden, who is believed to be hiding out further south. With American funds, the army is building schools, hospitals and roads in FATA to try to win the tribesmen's support and glean intelligence from them as to the whereabouts of Taliban and Al' Qaeda leaders.

But the army's one hand is tied behind its back. General Orakzai promised tribesmen the army would not interfere in their main economic livelihood – the smuggling of goods (and drugs) between Afghanistan and Pakistan – trade which also provides the Taliban with supplies. The army has also not prohibited the sale of guns and ammunition in FATA, which supply the whole of Pakistan.

Meanwhile, US officials and Afghan leaders have charged that Pakistan’s powerful Inter-services Intelligence (ISI) is clandestinely providing its own support to the Taliban, a charge Pakistan vehemently denies. However, on August 31 army spokesman Major General Shaukat Saulat admitted that three to four officers had been arrested for links to Pakistani extremist groups who are also backing the Taliban – the officers were all posted near FATA. In Afghanistan, officials close to President Karzai say the officers were in fact captured in Zabul province while helping the Taliban and were handed over to US forces who took them to Pakistan for questioning. The army denies the charge.

The arrests come amidst rising concerns that as President Pervez Musharraf, who is also army chief, allies himself closely to the US in its war against terrorism and in Iraq, Islamic extremism is rising in the army's officer corps. The army backed extremist Islamic causes such as the Taliban regime in the past, but since September 11 Musharraf has been at pains to stress that Islamic fundamentalism has been eliminated in the army.

The army's failure to contain the growing and widespread support for the Taliban amongst Pakistani Pashtuns is not helped by the fact that the neighboring province of the North West Frontier is presently ruled by Muttahida Majlis-e-Amal (MMA), an alliance of six Islamic fundamentalist parties who are all allied to the Taliban.

The MMA came to power after winning a majority in last October's general elections. Its two largest component parties are the Jamiat-e-Ullema Islam (JUI) and the Jamaat-e-Islami (JI). The JUI has a long history of backing the Taliban with tens of thousands of Pakistani fighters. Peshawar politicians and bureaucrats say the JUI is directly supporting the Taliban insurgency in southern Afghanistan, and many Taliban leaders and their families have been given sanctuary in JUI-controlled madrassas, or Islamic schools.

JI, on the other hand, has a pan-Islamic agenda based on the ideology of the Muslim Brotherhood and is the best organized Islamic party across Pakistan. The JI is backing its former Afghan ally and Brotherhood pan-Islamicist, the Afghan commander Gulbuddin Hikmetyar, who is allied to the Taliban and is active in eastern Afghanistan.

The real danger for Pakistan and its American ally lies in the fact that the stepped up Taliban resistance in Afghanistan is likely to embolden Islamic parties and extremist groups in Pakistan itself to take on the army and government of this nuclear power.

President Musharraf has so far been unable or unwilling to create a modern, moderate Pashtun leadership which could be a real alternative to extremists, nor has he been able to curb extremism in the ranks of his own military. Like Osama bin Laden, in Afghanistan and Pakistan a victory over terrorism remains as elusive as ever.

Rights: © 2003 Yale Center for the Study of Globalization. YaleGlobal