India failed to redeem their pride on an easy-paced track and were thrashed by nine wickets that allowed South Africa to complete a 4-0 swamp and set the tempo for the Test series. 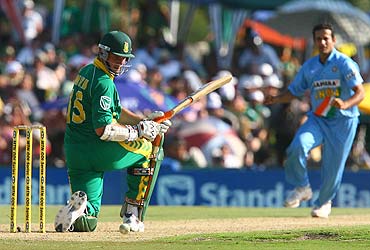 India failed to redeem their pride in the fifth and final one-day international and were thrashed comprehensively by nine wickets by South Africa who completed a 4-0 series whitewash today.

The Indians were outplayed by South Africa who restricted the visitors to 200 for 9 on an easy-paced track before overhauling the target in just 31.2 overs at the Supersport Park.

AB de Villiers, promoted to open for the first time in the series, remained unbeaten on 92 while skipper Graeme Smith finally struck form to score 79, making a complete mockery of the Indian bowling.

The show of these two batsmen overshadowed the efforts of Sachin Tendulkar who laboured to a 97-ball 55 and Mahendra Singh Dhoni (44) who ensured India touched the 200-run mark for the first time in the series.

The comprehensive win in the fifth and final match of the series, the first tie of which was washed out, means South Africa would go into the three-Test series, starting on December 15, with their confidence sky high.

Also boosting their morale would be the fact that all their four wins were facile with the victory margins being 157, 106 and 80 runs before today's humiliation.

Smith, so far a cold turkey against Zaheer Khan in the series, came on to his own in sunny conditions and a flat pitch by belting 79 runs from 85 balls with seven fours and three sixes.

The captain, who chose not to face the first ball by Zaheer, departed in the 29th over, hoisting Harbhajan Singh to long-on fielder but by then it was all over for the Indians.

It was De Villiers though who cut loose from the very beginning, driving and pulling Indian medium-pacers to desperation though he had a slice of luck when dropped by Mohammad Kaif at covers off S Sreesanth on 8 runs.

So cracking was the pace set by the home openers that 50 of the innings was raised in the 7th over.

Stand-in captain Virender Sehwag turned to his spinners as a last resort as early as in the ninth over. But both Anil Kumble and Harbhajan made little impression.

Smith was to find his feet soon and once came down the track to loft Harbhajan for a six, followed by two more during his entertaining knock.

De Villiers clobbered 12 fours and a six in his 98-ball knock.

Irfan Pathan was badly exposed on a slow batting wicket and was collared for 48 runs in his six overs. Only Zaheer in his seven overs threatened to take a wicket.

Put in to bat, India were reduced to 18 for 2 before being rescued by Tendulkar's gritty half century.

Tendulkar put on 85 runs from 149 balls with Dinesh Mongia (41) for the third wicket but that proved hardly enough.

In fact, the Indians could touch the 200-run mark, for the first time in the series, due to Dhoni whose 49-ball knock with two fours and two sixes gave some urgency to the innings.

Pollock was once again at the forefront with figures of 2 for 17 from his 10 overs and was well supported by the pace duo of Makhaya Ntini (3 for 32) and Andre Nel (1 for 34).

India were rocked early in their innings by Pollock who picked up Sehwag (11) and VVS Laxman off successive balls to reduce them to a shaky 18 for 2.

Sehwag, unable to make the most of an early missed chance against the same bowler, departed when he flashed a catch behind the stumps to Mark Boucher.

Laxman, brought in specially for this game, was out to a first ball duck when he tamely edged an out-swinger into the hands of Smith at first slip.

Tendulkar and Mongia then dropped anchor but the scoring dropped almost to a trickle with only one run coming between the 10th and 15th over of the innings.

Tendulkar blossomed with the introduction of left-arm spinner Robin Peterson and hit him for four fours in five overs. In between, there was a sharp blow on his left-forearm from Nel which needed medical attention on the field.

He was once again jittery when pacemen were introduced from both ends and was brilliantly caught in the covers by de Villiers after making 55 from 97 balls with eight fours.

Mongia dug in there but was dismissed in the 38th over after making 41 from 89 balls with three fours.

Dinesh Karthick (11) appeared innovative in his brief knock of 11 from 15 balls with two fours before slicing a catch to wicketkeeper Boucher off Nel.

Jacques Kallis then cleaned up Pathan (7) who backed away and found his stumps rattled by a straight delivery.

India were kept going at the other end by Dhoni who once straight hit Nel and later hooked Kallis for big sixes. However, he was out to an outstanding catch at widish long on by Nel who dived to his right after the batsman had a go at Ntini.

Zaheer hit an enormous six off Ntini in the final over to make the visitors touch the 200-run mark for the first time in the series.