When We Do It, Its A Riot. When Muslims Do It, It Is Terrorism

'Most of us do not see communal violence as terrorism. The massacre of Sikhs in 1984 is called a riot. The Muzaffarnagar violence against Muslims was a riot.' 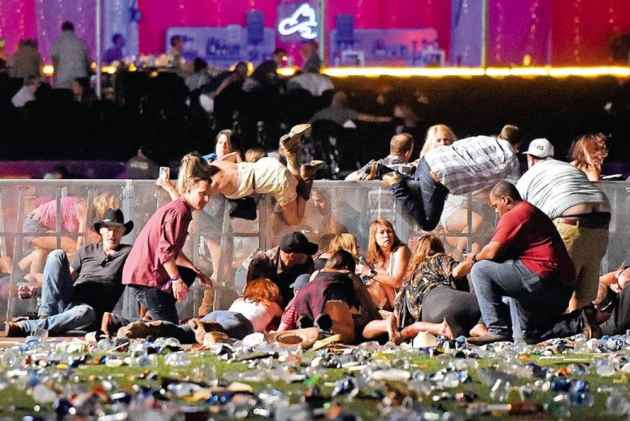 A few days ago a man in the American city of Las Vegas killed 58 strangers in a concert. He shot his machine guns into the crowd for over an hour, wounding over 500 people. The American police said that this was not an act of terrorism because he acted alone. The killer was a Christian. Would the police have said the same thing if he was Muslim? I don't think so.

Not much is known about the man or his motives and so this conclusion that this was not terrorism needs to be examined, along with the wider issue of how we understand terrorism.

My dictionary defines terrorism as "the unlawful use of violence and intimidation, especially against civilians, in the pursuit of political aims." If we look at this definition, many acts of violence can be defined as terrorism. Communal violence fits this perfectly because it is unlawful, aimed to intimidate, aimed at civilians and has political aims.

The second problem is the phrase "aimed at civilians". The majority of attacks in Jammu and Kashmir are against the armed forces and not civilians, but we consider them to be terrorist attacks. American law defines terrorism as "the unlawful use of force and violence against persons or property to intimidate or coerce a government, the civilian population, or any segment thereof, in furtherance of political or social objectives."

This definition aligns more or less with the one in the dictionary. As I have said before, not much is known about the Vegas shooter or his motives. Letting that lie, it is unclear how the police was convinced this was not a terror attack because his political or social objectives were unknown.

India's law against terror is called POTA and was legislated by the Vajpayee government in 2002. Like many laws in India, it is very poorly drafted and the language is all over the place. It defines an act of terrorism as: "Whoever (a) with intent to threaten the unity, integrity, security or sovereignty of India or to strike terror in the people or any section of the people does any act or thing by using bombs, dynamite or other explosive substances or inflammable substances or firearms or other lethal weapons or poisons or noxious gases or other chemicals or by any other substances (whether biological or otherwise) of a hazardous nature or by any other means whatsoever, in such a manner as to cause, or likely to cause, death of, or injuries to any person or persons or loss of, or damage to, or destruction of, property or disruption of any supplies or services essential to the life of the community or causes damage or destruction of any property or equipment used or intended to be used for the defense of India or in connection with any other purposes of the Government of India, any State Government or any of their agencies, or detains any person and threatens to kill or injure such person in order to compel the Government or any other person to do or abstain from doing any act."

This is not all, the law continues: "(b) is or continues to be a member of an association declared unlawful under the Unlawful Activities (Prevention) Act, 1967 (37 of 1967), or voluntarily does an act aiding or promoting in any manner the objects of such association and in either case is in possession of any unlicensed firearms, ammunition, explosive or other instrument or substance capable of causing mass destruction and commits any act resulting in loss of human life or grievous injury to any person or causes significant damage to any property, commits a terrorist act."

The crucial words are "unity, integrity, security and sovereignty". Our fear of Indian disintegration, a wholly unfounded fear, is what primarily drives the definition. Why such strange words like dynamite (which is a mining explosive never used in terrorism) were specifically included but not RDX or C14 or another modern explosive is not known. That is probably because the bureaucrat writing the law got his knowledge of explosives from watching Bollywood movies.

The POTA definition is at once wide and broad and very narrow, which is a good indication that not much thinking went into it. This does not surprise me because we have many laws that are poorly drafted and sweeping. All states have them. Without any crime being committed, Tamil Nadu can lock you up for a year without trial under the "Prevention of dangerous activities of bootleggers, drug-offenders, forest-offenders, goondas, immoral traffic offenders, sand-offenders, sexual offenders, slum-grabbers and video pirates Act".

To repeat, no crime needs to be committed, the government can jail you for a year if they suspect you will or may commit a crime in future. How does the government know someone is going to be a sand-offender or video pirate? Perhaps it has employed soothsayers and astrologers to do bhavishyavani.