In his new groundbreaking new book, 'A World of Three Zeroes', Yunus proposes a new form of capitalism where every individual is an entrepreneur and nobody is working for corpulent corporate 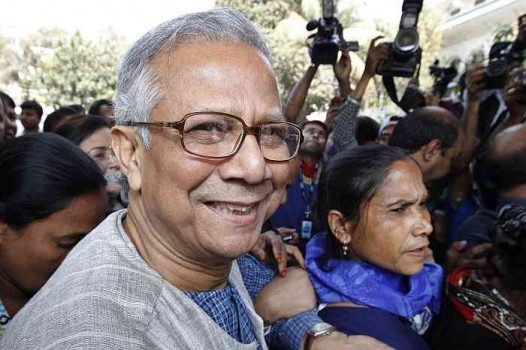 Muhammad Yunus, Nobel Peace Prize winner, who pioneered micro-credit with Grameen Bank in Bangladesh and invented social business, is out with his ambitious and groundbreaking new book, A World of Three Zeroes. Yunus proposes a new form of capitalism where every individual is an entrepreneur and nobody is working for a corpulent corporate. The three zeroes he expounds on are zero poverty, zero joblessness and zero net carbon emission. Yunus spoke to Satish Padmanabhan at the Jaipur Literature Festival. Excerpts from the conversation.

In your lifetime, ever since you embarked upon your mission to reduce poverty through microfinance and social business, don’t you think inequality in many countries has, in fact, widened?

Yes, inequality is getting widened every day, every minute, every second in the world. There was an Oxfam report recently which was reported in your press that 73% of the wealth in India is owned by 1% of people. And guess what will be the data next year? I can promise you that it will be more than 73%, it will be 80 or 85%. It won't go down. So, inequality is widening. All the wealth in this world is in the control of a handful of people.

We have come away from the Dark Ages, the medieval times, through tyrant kingdoms and cruel dictatorships, through fascism and communist excesses, to a liberal world, where more and more countries have embraced democracy. Isn't it then a contradiction that inequality is on the rise?

There is no contradiction because what we call democracy is not real. When so few people control all the wealth, they also control elections, they control politics, they control the media. They control everything. We are keeping a kind of a façade by saying look we are having elections, people are voting of their free will, but somebody is holding the strings to make people dance.

Yunus: They may be but there is nothing really to chose because the capitalist system is so entrenched. The capitalist system is like a machine whose only job is to suck up all the wealth. It's the only function it does and does it very efficiently. Why? Because the way the system is built, where it puts the human being, is done in a wrong way. The definition of a human being in this economic theory is that he is driven by a selfish motive, that he is driven by greed. Everybody is working for someone bigger to make him grow even bigger. People have been told that accumulating wealth is the only goal and they are going at it blindly.

Look at the jobs we do. A worker is like a mercenary. When I say I work for somebody, what does it mean? That I work very hard so that my owners can make more and more profit. But now the worker has got into the system, he is part of it. He is given a promotion, a raise and he works even harder to make the owner grow even richer.

What then is the way out?

We have to redesign the whole economic system. It is not a simple solution, it is not that a government passes a law and everything will be alright. First, you have to recognise that the system is wrong, then we have to go and change it. The whole idea that we are greedy is a wrong interpretation. Human beings by nature are not greedy, they are a combination of selfishness and selflessness. But the economic theory has pushed away selflessness.

Do you see such a change taking place anywhere?

When I started my micro credit, people said that it will never work. They said it's a crazy idea, how are poor people going to take the credit and pay you back? But we made it happen. Micro-finance is a reality now, it's globally done, in rich countries, in poor countries. So, new theories take some effort. I am convinced that this is the way to develop a new system and if you too believe in it, then we are already two. People who read my book, even if half of them believe that yes, it can be done, that is one more step. We have to talk about this to our children as they are the future. Since you and I are already half gone, our minds are already polluted by the things they have told us and we have believed them.

But young people are still figuring out what is right and what is wrong. We have to tell them, look, you have two options in life--either you can work for somebody or you can do something for yourself. We have to make it clear to them that either you can work for somebody, become a mercenary to make somebody else rich, or you can do your own business. We should then let young people decide.

I am saying in my book that all human beings are by nature all entrepreneurs. The economic theory has pushed us to become workers. In the entire human history, man has not worked for anybody. We were go-getters, we were hunters, we grew things on the field. But they have made us believe that our destiny is to get a job. And if you don't get a job, you do nothing. But there is so much to do. Why just sit around merely because I don't have a job. The system has put a spell on you and you have to snap out of it. If all of us become entrepreneurs then the concentration of wealth will not be in a few hands, nobody can become super rich because I am not working for him. Then you use your creative powers which you don't in a job.

The other point you emphasise is about carbon emission levels, but that is a controversial topic today, with the US backing out of the Paris climate agreement.

Look, if the planet doesn't exist then we don't exist. We have to reduced it below 2% and we have to do it very quickly because we may already be near the point of no return. Right now the idea seems to be to exhaust everything we have in quick time because we don't care what will happen to our next generation. This GDP growth we talk about, it's growth for whom? It's for the one percent of the population. The poor are not growing, or their growth is insignificant.

Apart from the environment we must also look at technology seriously. Now with this Artificial Intelligence human beings will be rendered even more useless. We must have a social watchdog for technology. The goal of technology should be the welfare of the people, not to fatten a few rich companies or countries. Technology should be for healthcare, sanitation, water management. It should be for a circular economy where nothing gets wasted and everything is reused. There has to be a social control over technology. People should be able to say that if they don't want driverless cars, that technology should not be developed. We should be able to say that first you prove that this technology is for the good of the majority of the people, only then will you be able to develop it. You cannot develop technology which will be harmful to the planet. To begin with, there should be some guidelines for developing technologies, and it could be adopted by the United Nations so that no country can violate them. So, the point I am making is in economic theory, in carbon emission, in technology development, we have redesign the whole system.

Have you thought of a term for what you are proposing...

No, no. No isms for me please.