What’s Special About Ramlilas Of Northeast And Odisha?

It’s time for Ramlila shows now, as Navaratri festivity starts today. The Assam and Odisha styles of the folksy ballet seek to retain individuality unlike those in north India. A look: 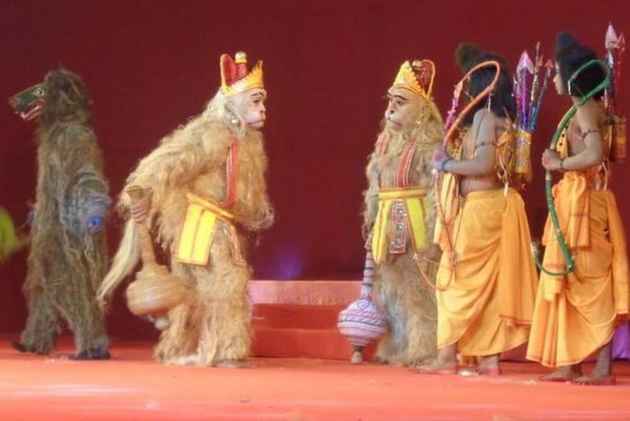 Stage adaptations of an epic as ancient and vibrant as the Ramayana can invite a variety of interpretations, but that isn’t something this folksy enactment of the Valmiki classic has tried much over the centuries. The Ramilila, in fact, portrays the dramatic life around the prince (and later the king) of Ayodhya pretty much on the mainstream lines of its narrative upcountry, but the rustic dance-drama tends to focus on episodes that are more in sync with the local landscape.

That is possibly why the Ramlila style of Assam features so full of trees, animals and birds. The northeastern state, green along the plains and thickly forested in its upper ranges, has engrossing scenes from jungle-centric chapters of the Ramayana. Portions such as the abduction of the protagonist’s wife Sita and Rama’s killing of the monkey-king Bali as well as the Lankan emperor Ravana have a theatrical flavour that is pleasantly distinct from the art’s more dominant schools that have thrived across the Gangetic plains of northern India. Take the case of the kidnap at Panchavati. The sylvan locale is the ashram where Rama lives in exile with his wife and his younger brother Lakshmana—it is along the banks of the Godavari in Nashik of present-day Maharashtra. The golden deer (which turns out to be Ravana’s uncle Maricha in disguise) entices Sita with its beauty—so much so, she wants to play with it. The cute animal is certainly a turning-point character in the story, but its size in Assamese Ramlila is surreal. The deer is quite big, tacitly implying its vitality by appearing as a larger-than-life creature.

Soon, as Ravana sheds his sage-like looks and snatches away Sita in his career Pushpaka that can travel by air, Jatayu seeks to obstruct the villain. The demigod in the form of an eagle does give a threat to the twenty-handed Lankan, but eventually the bird gets it wings chopped off—and falls to the ground (to later give a clue to Rama and Lakshmana about the abduction). Jatayu, too, comes in an imposing physique in the Assam style of Ramlila. Rama and Lakshmana, in their subsequent search for Sita and efforts to get her back, tie up with Sugriva, who is the estranged younger brother of powerful monkey king Vali ruling Kishkinda. The fight between the two siblings and the entry of bear leader Jambavan find such prominence in the Assamese Ramlila that the viewer is once more reminded of ways to look at a story through one’s own surroundings and endemic culture.

Ravana is also a masked presence, and lent a darkish blue hue that suggestive of the dark skin colour of Dravidians. Interestingly, his ten heads are not designed in a horizontal fashion as one sees in the other styles of Ramlila. The Assamese-style Ravana has his nine other heads encircling the actor’s face covered with a mask. The use of masks does dismiss the scope of facial emoting—something which is so advanced and stylised in classical group dances like Kathakali or Kuchipudi that have theatre as well. But, the technique comes as a “beautiful” suggestion of disguise that the so-called high-brown performing arts in India tend to avoid largely, notes Kathakali performer Sadanam K. Harikumaran. “In a way, it is sad that masks are getting lesser used in my form of the Kerala dance-drama,” he shrugs.

In the end, when the kingdom of Ayodhya celebrates Rama’s coronation after his return from exile and getting rid of the menacing Ravana, the lord’s countrymen join the celebrations in ecstasy. In the Assamese Ramlila, it is more of animals—characters like monkeys (including Hanuman) and the bear—that deck up the stage, outshining if not outnumbering the human presence. In eastern India, the Oriya style of Ramlila too has its individuality that is different from what exists with the art’s schools across Uttar Pradesh, Bihar and Madhya Pradesh. For one, its background vocal is virtually non-stop, making it look more like a ballet than opera. There is a jump-cut quality to certain melodramatic scenes—more so in the portrayal of scenes from Panchavati.

In the days of the Ramlilas of the northern Indian plains (and the hills of Uttarakhand) falling prey to slow loss of identity by incorporating a tinsel culture, their counterparts in the country’s east and northeast come across as refreshing Navaratra-time stage experience for art-lovers. Not surprisingly, and perhaps much to the relief of those seeking exposure to culture in forms less compromised to crass new-age antics, the Ramlila styles of Assam and Odisha come as richer representation of the art with a capacity to appeal people far beyond their geographical boundaries.