So is it time to let out whoops of unrestrained, unmitigated joy and jubilation at DoT's latest statement passing the buck on to 'erring ISPs' and celebrate that the blogs would be back in business "within 48 hours"? 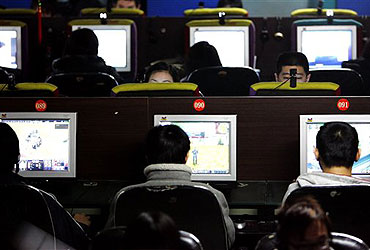 After such off-the-cuff dismissals as, "Somebody must have blocked some sites. What is your problem?" as one Dr Gulshan Rai, director of Indian Computer Emergency Response Team (CERT) was reported to have responded with, when first queried about the gag on the blockage of many blog sites, the latest statement from the Department of Telecommunications (DoT) today seems calculated to reduce us all to letting out whoops of unrestrained, unmitigated joy and jubilation.

To understand the detailed reasons, perhaps it is important to take a look at the official release put out by the Press Information Bureau:

The Department of Telecom (DoT) has instructed all the Internet Service Providers (ISPs) in the country to block only the specified website/webpages on the parent website. The DoT, in its letter issued to all the ISPs has mentioned that it had come to notice that in some cases the parent website had been blocked in contravention to what was stated in its earlier order dated 13th July 2006 whereby it ordered the ISPs to block certain websites/webpages.

As such the DoT has now directed all the ISPs to strictly comply with the order dated 13th July 2006 and provide unhindered access to Internet except for the websites/webpages which have been specifically mentioned in its orders issued from time to time.

The DoT has further sought explanation from the erring ISPs as to why action be not taken against them for blocking unintended websites/webpages.

We should presumably celebrate the prompt and swift manner in which the controversy finally came to "the notice" of the powers that be and be suitably grateful for the offered redressal? And while we are at it, perhaps we can also commend them for their stern, firm and no-nonsense warning to the "erring ISPs"?

Sir Humphrey Appleby must really be chortling at this classic response from our progressive sarkar and the sarkari babus: Pass the buck, shift the blame, act tough and demand explanation in the time-honoured traditions of a bully from those subservient, hoping in the process that the real issue would get forgotten with nary a whimper. Offence, obviously, is the time-tested mode of defence. To slightly paraphrase the great Faiz Ahmed Faiz, what is most offensive in the above is what it doesn't say at all. woh baat saare fasaane meN jis kaa zikr naa thaa woh baat unko bahut naa-gawaar guzree hai. It still doesn't tell us "erring ISPs" who ended up blocking entire domains -- officially, that is  -- as to which websites were -- are -- sought to be banned, nor offers any explanation as to why or on what basis.

And yet, given how arbitrary and whimsical bans stay on in place, perhaps it is a fit case for being thankful for small mercies and to acknowledge the collective might of the bloggers that atleast the unintended victims would get some redressal. But what is even more important is to emphasise that were it not for the "erring ISPs" who ended up blocking entire domains, and as a result such high-profile blog sites as blogspot etc, the erudite, articulate and voluble bloggers would not have been directly affected. And there would not have been any hue and cry -- "certain websites/webpages" that were sought to be blocked by DoT, in what it calls its "order dated 13th July 2006", would have, if at all mentioned, at best, have been a passing and momentary storm in a blogsphere tea-cup.

Unfortunately, despite the whole hai-tauba, that still remains the case. Almost all the comment this controversy has generated, so far, in the mainstream media particularly, has largely focussed on how even such exemplary and praiseworthy blogs as mumbaihelp.blogspot.com became inaccessible. Yes, the resulting DoT statement today, and the fact that the blogs on the blocked sites would be back for viewing across most of India, is a matter for small satisfaction. The sequence of events is a testimony to, and underlining of, the fact that the blogs enjoy tremendous media-clout. That was perhaps inevitable, but before we get too carried away by the celebratory hey and a ho and hey-nonny-no of it all, it would be useful if the commendable effort of those who painstakingly worked on the Censorhip Wikia pages is carried forward to its logical conclusion. Now that the blogs are back (though there still are problems, as indicated by the ISPAI  -- Internet Service Providers Association of India -- despite assurances that the blogs would be back to business "within 48 hours"), it is time to reflect on the larger issue that concerns us all.

Given this 'progressive' government's track record of not brooking any dissent, particularly in light of the recent controversial Broadcasting Services Regulation Bill, 2006, also supposedly drafted in 'national, consumer interest', some obvious questions need to be asked, even if they are considered too impolite in these times, when we all have been supposedly empowered by the Right To Information Act. How long exactly would we have to wait before the "order dated 13th July 2006" is placed in the public domain? What criteria exactly was chosen to ban these websites? How are we to know that this is not arbitrary and whimsical?

Without giving any certificate of approval to any of these impugned websites/pages, or to go into the merits and demerits of the content carried by them, the sheer arbitrariness and ham-handedness of the whole sordid sequence of events does make one wonder whether any of such decisions are thought through. Surely, the 2003 case -- when DoT's activism and enthusiasm had resulted in banning of the entire yahoogroups.com when only one particular Naga group was sought to be banned -- would have wised up good old CERT/DOT that this was not the way to go? The best way to take action, not that such action is advisable or recommended, but even in a hypothetical case where such an action was actually required for 'national-security' or 'communal-harmony' purposes -- amorphous, though the terms are, and therefore liable to all sorts of misuse -- surely the way to go is to deal with the servers hosting the offending sites? And surely, even then, what are the worthies going to do if the same set of people were to just up and move to another server where their writ does not run?) And surely there is a small matter of asking for transparency and accountability as to why such and such websites were chosen

The issue, as would be obvious to anybody with one glance at the list, is actually the age-old one about freedom of expression, and the pros and cons of banning even that which many of us, including this writer, consider to be hate-speech, in bad-taste or inflammatory. And if the penal code applies, where's the problem in being transparent about it? It would be futile to regurgitate the usual arguments against all bans, but what is relevant to consider is the nature of the beast that is sought to be controlled here. And that is precisely what leaves one gasping with disbelief at the sheer stupidity of it all.

Governments in China, Pakistan and other such places where similar little Stalins go around routinely gagging the press, have discovered that there are always ways around such bans. That they just do not work (despite cravenness on the part of Google and Yahoo when it comes to China). So not only were the bans ineffective, as the websites sought to be banned resulting in this brouhaha remained easily accessible, the irony of it all is that what the DoT is asking in its statement today is to just ignore the fact altogether. Perhaps ignorance is bliss? And feigned ignorance even more so? Helps to be in denial?

Besides, at least someone in the government should have had the common-sense to figure out that once the sites banned became public knowledge, someone would ask how come the websites banned were all, shall we say, loosely, only of one broad ideological persuasion? Or was the idea only to comply with the diktats of some political masters and to show that something was being done naam ke vaaste? For form's sake? To play up to some imagined constituency that the government was out there doing something to safe-guard their perceived interests?

Given the timing of the ban, questions of this ban's linkages with Mumbai blasts were bound to be asked. Does no one in the government realise that any such list of banned websites is only going to leave it open to the charge, by implication at least, that the sites not banned are therefore approved and declared safe for access? Or at least considered not as dangerous or inflammatory or full of hate-speech or whateverthehellthereasonswere? Surely the government has more serious things to worry about than rather tame pro-Bush rants? Surely it cannot be anyone's case that there exist no other sites which can be charged with similar or more egregious 'offences'? Perhaps the reasons for not blocking those others were somewhat on the lines of those outlined in an article we carried yesterday? But then that would beg another question: why can't the same logic be applied to these websites as well?

Besides, doesn't it make even tactical sense to keep all the loons -- if they indeed can be demonstrated to be causing such threats as to necessitate banning -- quarantined in one easily recognisable place rather than have them sprout all over? Isn't it easy to dismiss some of the rather, shall we say, cuckoo and crazy theories that some places on the web are known to disseminate by merely pointing to the lack of credibility of the source? Wouldn't it be useful to actually start or propagate and advertise those web-resources which actually rubbish such claims? Is the government not ever going to consider positive ways to actually do something useful rather than create more controversies when there are more crying issues to be addressed? Wouldn't sites based on existing models such as, say, the reference pages on urban legends be more useful to consider? Isn't it useful to know what needs to be countered and build resources to be able to counter disinformation rather than give it free publicity on front pages of national dailies that would be the dream of any PR agency working on behalf of those that the CERT/DoT worthies in their considered wisdom have determined are not fit for access by Indians? Come to think about it, perhaps the conspiracy theorists are right? And it was all one giant exercise to give free publicity to some chosen websites?

So, to repeat like a stuck record, by all means, offer a salaam to the collective might of the bloggers and cheer their increasing media-clout, but do spare a moment for the dangers in allowing such arbitrariness to go unchallenged. Today we might approve of the bans on those websites we find hateful or in bad-taste, but tomorrow, it might be somebody else's sensibility - or whimsicality - deciding what they find in bad-taste or inflammatory.

It's time to thank the "erring ISPs" too, because, without them, the news of these bans would, at best, have remained a small, passing storm in cyberspatial tea-cups.

What Has Israel Achieved?