What If Kundan Lal Hadn't Hit Upon Butter Chicken?

Where would the poultry industry be without this wonder recipe? What would Pandit Nehru have served at state banquets, and what would Rajiv and Sanjay Gandhi have demanded in their school tiffin boxes? 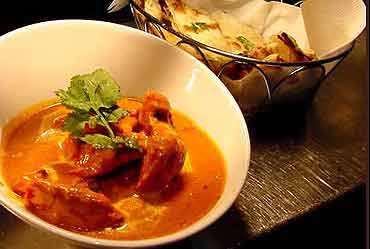 outlookindia.com
-0001-11-30T00:00:00+05:53
If a saw blade hadn't sliced the subcontinent in 1947, those delectable red birds that hang on skewers wouldn't have been bathed in rich butter-tomato gravy in dhabas, canteens and Punjabi-Mughali eateries. And Kundal Lal Gujral, who fled from Peshawar and set up Moti Mahal in Delhi’s Daryaganj wouldn't have gone down in post-partition culinary history as the brain behind murgh makhni.

Though the tandoor was part of the undivided heritage of ancient India, all that had gone into these hot earth ovens since the Indus Valley civilisation was pounded wheat. Flattened dough that was slapped against its walls and left there to be heat-licked into warm, chewy doneness. And for centuries, it was chicken-this or chicken-that, never something-chicken. It was Kundan Lal first stuck a bird in a clay oven, bathed it in butter and turned the spiced bird/ fowl into a suffix.

What if Kundan Lal had never invented butter chicken? What would Pandit Nehru have served at state banquets, and what would Rajiv and Sanjay Gandhi have demanded in their school tiffin boxes? "There's no vacuum in history, science and culture," says gastronome Pushpesh Pant. "If the apple hadn't fallen on Newton's head it would have fallen on another scientist; someone else would've put a chicken in the tandoor."

But would other cooks have had the bravado to go beyond the holy trio of onions, tomatoes and butter? Would they have coaxed the chicken into flour-paste and created a tandoori-samosa? What if the orange meat had been wrapped around khoya and rolled in pistachios and served as tiranga-murghi? What else would've eateries in India and the Sylheti cooks running UK's curry houses have trotted out, if, everybody hadn't been seduced by murgh makhni?

Says veteran journalist Inder Malhotra, a regular at the restaurant with Feroze Gandhi: "Even though it was priced at Rs 5 in '49, we would eat a full chicken each, along with rotis and dal makhni." It still rules the roost. "Butter chicken or shahi paneer, which shares the same gravy, are still ordered at every table," says Monish Gujral, grandson of Kundan Lal, who manages the Moti Mahal chain in India.

Surprisingly, few people speak of the ingenious thrift that lies behind the success of murgh makhni, a pan-Indian pleasure of the flesh, now readily available in all world capitals. Double marination that ensures quick roasting in a tandoor, the addition of butter which speeds up the sales of old stringy or dry birds and the use of spices and colour which mask poor quality meat and conceal dust that coats tandoori-d chickens that are sold in the open.

Where would the poultry industry be without this wonder recipe? "Its popularity has helped to drive the prices of chicken down," says food expert Jiggs Kalra. He also clarifies his stand: "Butter chicken should be banned, only restaurants that can't conceive of anything original, plonk tandoori chicken into gravy." He believes this low-common denominator Punjabi dish has stymied the chances of better dishes like Lucknowi qormas.

Today, almost six decades after its invention, Robin Cook, former foreign secretary UK, had the temerity to declare the chicken tikka masala, a derivative version of murgh makhni, as a national dish of Britain. Call it reverse colonisation if you like. But one thing is for sure, it's a cook from Peshawar, who crossed borders and eventually got our former dividing and ruling empire by their taste buds.